When fact-checking political ads, common accusations thrown back and forth are about healthcare policy. We sort fact from fiction on where the candidates stand. 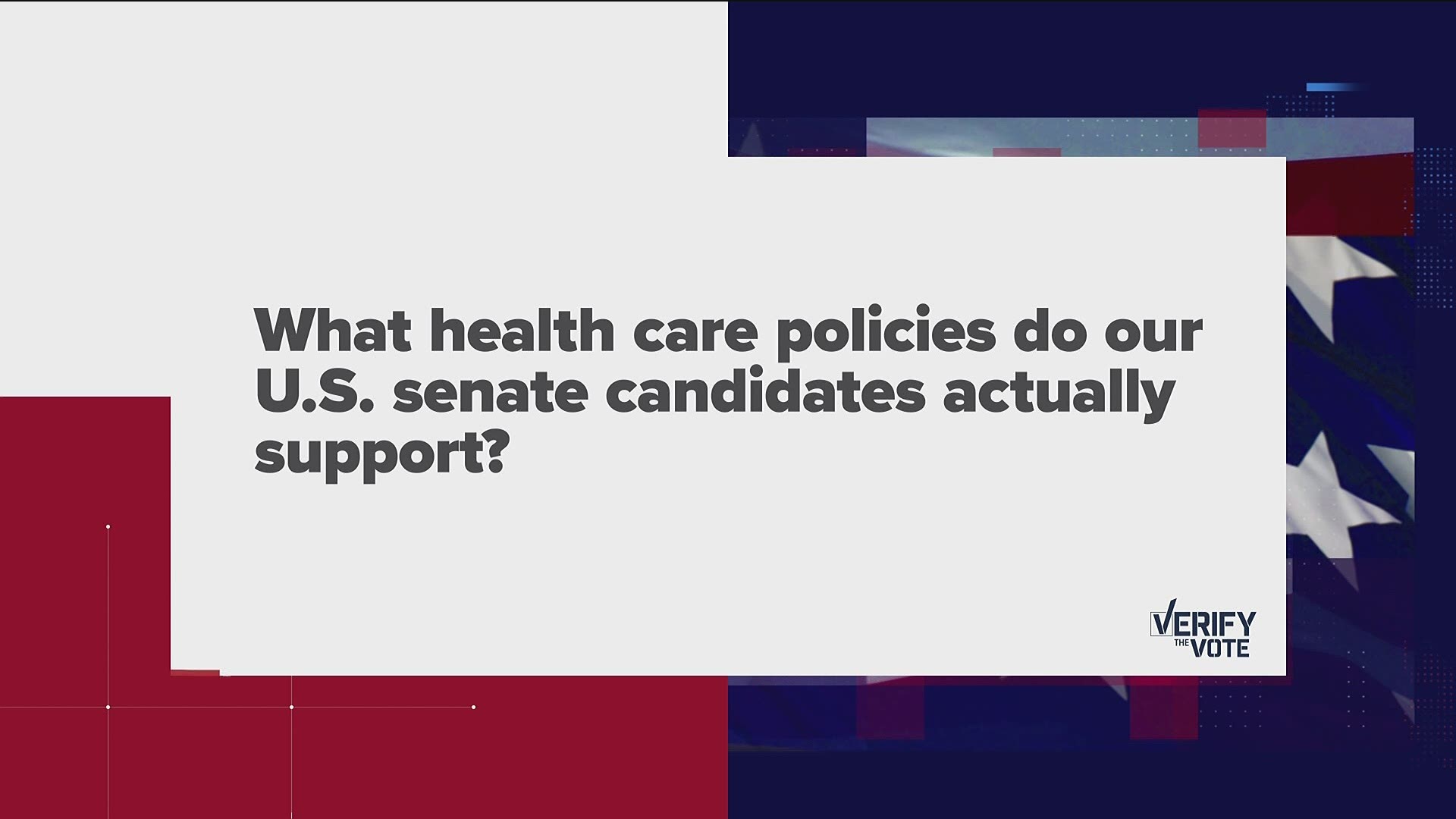 ATLANTA — Healthcare is on the minds of many as Georgia heads into a Senate runoff - as is how the candidates might influence it in the future.

Between affordability and how people with pre-existing health conditions are impacted, 11Alive's Verify Team used data, previous statements, and plans laid out by all candidates to answer the biggest policy criticisms of each side.

Do Republican Senators David Perdue and Kelly Loeffler have a plan to include people with pre-existing health conditions?

Yes, Democrats Ossoff and Warnock do have plans to make the ACA more affordable. But these are still just campaign promises.

Yes, Republicans Perdue and Loeffler have introduced a joint health care resolution that includes pre-existing health conditions. But it's unclear how the plan would be implemented.

For the Democratic candidates, the backing of the Affordable Care Act, also known as Obamacare, is criticized by Republican Senators David Perdue and Kelly Loeffler in many of their political ads.

According to Healthcare.gov, the ACA Law has three primary goals. The goals are to make affordable health insurance available to those living in poverty, expand the Medicaid program, and support medical care delivery methods designed to lower the cost of healthcare.

Republicans have argued the Affordable Care Act is too expensive for the average American, alleging increased premiums, deductibles and sub-standard care.

So, what are Ossoff and Warnock's plans to make the ACA more affordable?

Ossoff said his health insurance option reduces any concerning costs. He said he would "offer Georgians an option not-for-profit alternative to private insurance."

“More choice increases competition in the health insurance marketplace and lowers costs … forcing private insurers to compete with the public plan on quality and price,” Ossoff states in his health care plan on his campaign website.

On the Reverend's campaign website, he said he "support(s) legislation to lower the costs of prescription drugs, including legislation to authorize the federal government to negotiate with drug companies to bring down prices.”

So, we can Verify that Jon Ossoff and Reverend Raphael Warnock both have a plan to make healthcare more affordable, but these are just campaign promises for now.

The biggest criticism of Republicans is their position on pre-existing conditions.

Warnock recently tweeted, "Loeffler's plan lets insurance companies deny coverage to the 1.8M Georgians with pre-existing conditions in the middle of a pandemic."

11Alive's Verify team looked at voting records, previous statements, and the fine print on both Senators Kelly Loeffler's and David Perdue's campaign websites to see where they stand on this issue.

"Health insurance should always cover pre-existing conditions for anyone. Period! But unfortunately, some people want to play political games with this," Senator Perdue said in one of his campaign ads.

As an opponent of the ACA, in his tenure as a U.S. Senator, Perdue has voted to repeal and replace the ACA, but the legislation failed in the house in 2017.

Loeffler is also an opponent of the Affordable Care Act.

In November, Senators Perdue and Loeffler introduced a joint healthcare resolution for Georgians which includes their position on pre-existing conditions.

It discusses the need for protections of individuals with pre-existing conditions, lowering the costs for prescription drugs and devices, insurance premiums and other safeguards.

How the plan would be implemented is unclear as the Democratic challengers dispute the details of the proposal.

But we can Verify the claim is true, Senators Loeffler and Perdue are proposing a plan that does include coverage for people with pre-existing health conditions.