Political ads are flooding all platforms in Georgia making claims against candidates Perdue, Ossoff, Loeffler, and Warnock. We verify what's true and what's not. 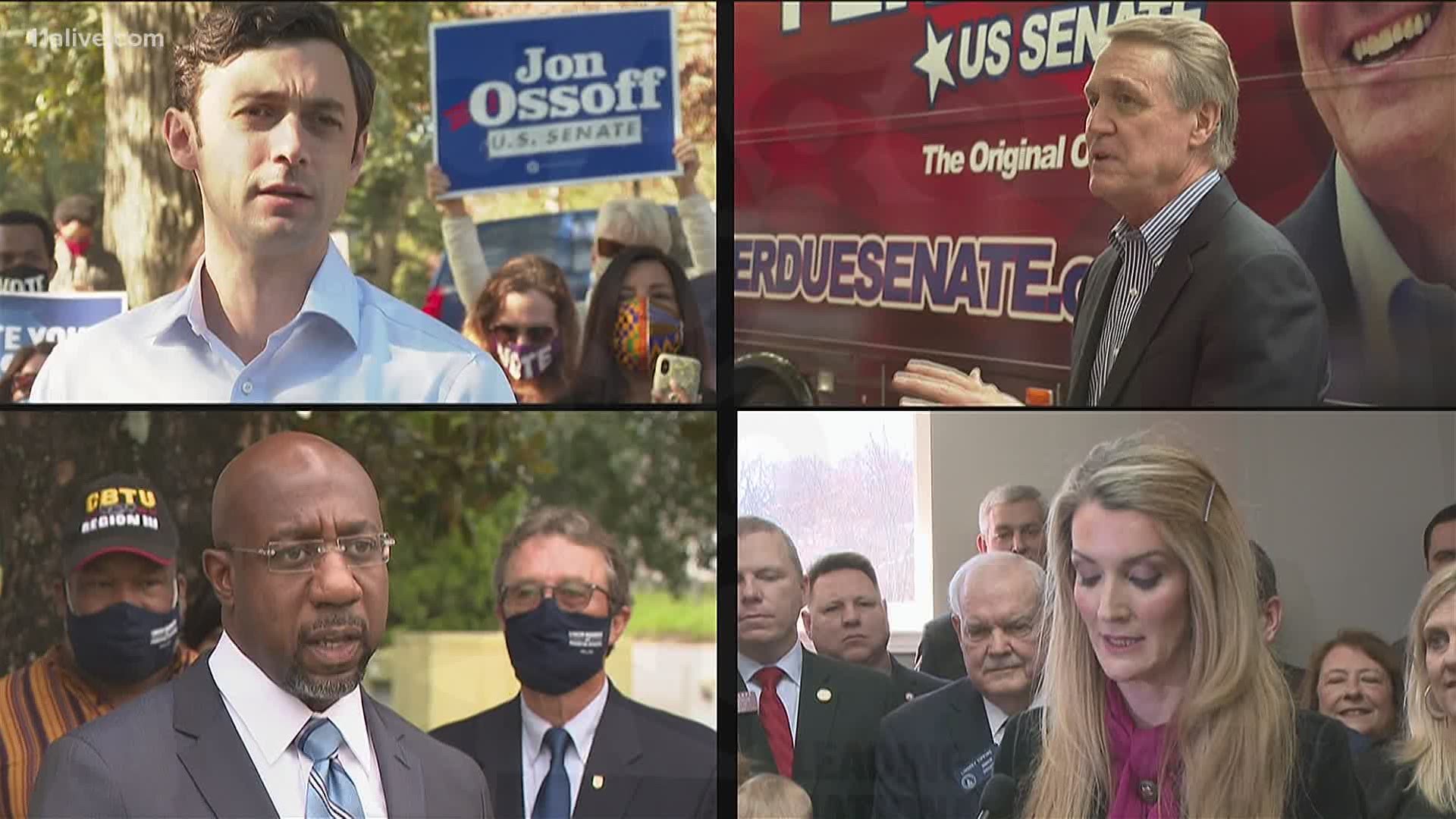 ATLANTA — Millions of dollars are being spent in Georgia on ads for and against each candidate in the two runoff races that will determine the balance of power in the Senate.

Our 11Alive Verify Team is fact-checking what is being said in the political ads and online ahead of the January 5 runoff election.

It is important to know the difference between a candidate-endorsed ad and a Political Action Committee (PAC) ad. According to federal laws, candidate ads do not fall under the Truth in Advertising Laws, but PAC ads, where an outside person or group creates an advertisement, do. So, in most instances, candidates themselves can say whatever they wan0t and it falls under freedom of speech.

It's up to voters to distinguish what's fact and what's fiction. So, our 11Alive Verify team is here to help. Tracking the political ads and online claims, we are sorting out what is true from what is false, and in a lot of the cases, identifying statements used out of context.

Here's what we found on the claims against each candidate.

Elected in 2014, Perdue is the longest-running Senator between the two runoff races. One of President Trump's earliest advocates in the Senate, Perdue is accused of ethics violations involving private Senate briefings and his trade stocks and wanting to end protections for pre-existing health conditions.

Here's what we found when fact-checking the claims against David Perdue.

"Voted to block small business help" - this claim is false, but needs some context. As the pandemic continues to impact businesses big and small, the Senate has been battling back and forth within party lines about how to best help. To answer this verify and get perspective on the issue, the 11Alive Verify team looked at the votes Perdue has cast in regard to financial assistance for small businesses.

As of Nov. 30, two bills have made their way up to a Senate vote involving small business help during the pandemic. The first was the Cares Act in March, which provided stimulus money to individual Americans, as well as providing small business loans, among other things. Perdue voted yes to the Cares Act as well as the GOP skinny bill pushed through in September that was a cut down version of the Heroes Act which Perdue was against.

Helping to enact the PPP is just one of the many ways we have supported our small businesses in Georgia the past six years, and I look forward to helping them thrive even more in the next six. pic.twitter.com/SmsQf62ell

"Bought Navy contractor stock right before assuming control of subcommittee on Seapower, then sold stocks for profit" - this claim is true. Perdue was named the chairman of the Senate Armed Services Subcommittee on Seapower in January 2019. Allegations came out during the runoff campaign that right before he started running the committee, he bought $190,000 of stocks in BWX Technologies, one of the few companies contracted with the Pentagon to make submarine parts for the military.

While drafting the National Defense Authorization Act, an annual funding legislation for the U.S. military, Perdue sold some of his BWX stock. According to financial statements from Senator Perdue, he made between $15,000 to $50,000 in his BWX trading.

Senator Perdue says he was cleared of insider trading claims related to his stock trading, by the Department of Justice, the Senate Ethics Committee, and the Securities and Exchange Commission. 11Alive has reached out to all three bodies but have yet to receive proof of this.

So, we can Verify the stock trades did happen, but it's unclear whether any laws were violated.

Perdue has not answered 11Alive's specific questions about these allegations, but has said previously that he pays someone to manage his stocks, and is "not involved in the day-to-day."

Democratic challenger to Perdue is businessman Jon Ossoff. The Georgia native is the CEO of Insight TWI, a media production company. Ossoff is accused of being a "radical socialist" paid by the Chinese government, endorsed by the Communist Party, and wanting to defund the police.

Here's what we found when fact-checking the claims against Jon Ossoff.

"Paid by the Chinese Government" - this claim is false. Perdue has pointed to a business transaction from Ossoff's company, Insights TWI, as being "paid by the Chinese Government" and hiding it. According to financial statements, Ossoff's company received $5,000 from PCCW Media Limited, a media company based in Hong Kong, over the course of two years for licensing on an ISIS war crime documentary.

In Ossoff's May financial statement, the money was not disclosed but was updated later to include it. PCCW CEO Richard Li has spoken out against independence and the pro-democracy protests in China, but there is no evidence that the money the companies exchanged came from the Chinese government.

We reached out to Ossoff's campaign about these allegations and questions about his company. They said TWI licenses the films for distribution to companies such as Sky Vision, which then re-licenses them to individual television stations based in 33 countries.

"It is nonsensical to claim that just because a broadcaster aired content produced by Jon's company that Jon, in turn, has a working business relationship with the government of a tangential country and an entirely separate economy," an Ossoff campaign spokesperson said in a statement to 11Alive.

RELATED: VERIFY: Jon Ossoff was not endorsed by Communist Party USA or funded by Chinese government

"Washington D.C. as the 51st state" - this claim is true. Ossoff has said multiple times while campaigning that he supports D.C. achieving statehood. "Residents in the nation’s capital pay taxes and yet are not fully represented in Congress or the U.S. Senate. They deserve equal rights. There’s nothing nefarious there, just equal rights and representation," his campaign staff said in a statement to 11Alive.

"Wants to defund the police" - this claim is false. In an interview on "The Clay Cane Show" on Sirius XM in September, Ossoff explained his stance. “I oppose defunding the police and I think, frankly, it’s a counterproductive and foolish way of characterizing what I think for some folks is a desire to reform police,” Ossoff said.

Loeffler is the Republican incumbent in the second Senate runoff seat, having assumed office in January after Governor Brian Kemp appointed her to replace Senator Johnny Isakson. Georgia's conservative junior senator is accused of "buying votes", ethical violations involving her stock trading after getting private Senate briefings, and falsifying information about her finances.

Here's what we found when fact-checking the claims against Kelly Loeffler.

"Sold stocks after getting a private COVID-19 briefing" - Senator Loeffler confirmed that she did trade the stocks in question, but denied using non-public information in her stock trading. Loeffler also has said she isn't involved in her day-to-day stocks. A Senate Ethics Committee investigation found no evidence that she violated any laws or Senate rules. The Department of Justice also dropped their investigation into alleged insider trading.

"Solicited campaign contributions from within a Senate building" - this claim is true. Kelly Loeffler was seen on FOX News in an interview within the Russell Senate Office building asking for donations to her campaign.

"We know that hundreds of millions of dark, liberal money is pouring into our state. That's why it's so important that everyone across the country get involved. They can visit KellyforSenate.com to chip in 5 or 10 bucks to get involved, or volunteer. But what we have to do is make sure Georgians vote at the polls," Loeffler said in the interview.

Shortly after the broadcast, the Democratic Party of Georgia filed a complaint with the U.S. Senate Select Committee on Ethics and a request for an investigation with the Department of Justice. Senate ethics rules paraphrase the law as "Senate Members and staff may not receive or solicit campaign contributions in any federal building." The law states, "A person who violates this section shall be fined not more than $5,000, imprisoned not more than 3 years, or both."

When 11Alive asked Loeffler's team about the complaint, we did not receive a straight response, instead, Communications Director Stephen Lawson pointed his finger off subject to topics against opponent Raphael Warnock, calling the claim "frivolous".

Reverend Warnock is the Democrat running against incumbent Kelly Loeffler. Warnock is a pastor at Ebenezer Baptist Church and grew up in Atlanta. Claims about Warnock include him allegedly being anti-military, wanting to "open up the jails", a Fidel Castro supporter, and other claims saying he is "a dangerous extremist".

Here's what we found when fact-checking the claims against Reverend Raphael Warnock.

"People facing nonviolent misdemeanor charges who have not been convicted of a crime should not remain in jail simply because they can’t afford bail. Reverend Warnock has worked with the faith communities in Georgia on reforming that system and in the Senate, Reverend Warnock will continue to pursue policies that strengthen Georgia communities through criminal justice reform, including cash bail reform," Warnock's team said to 11Alive in a statement.

"Made anti-military remarks" -  A video has gone viral from a sermon Reverend Warnock gave, referencing Matthew 6:24, saying "nobody can serve God and the military." The video is verified as legitimate, but Warnock's campaign says his words are being used out of context while adding Warnock's father was both a pastor and veteran.

"That a person cannot have two masters. It is a spiritual lesson that is basic and foundational for people of faith. What I was expressing was the fact that as a person of faith, my ultimate allegiance is to God, and therefore, whatever else that I may commit myself to, it has to be built on a spiritual foundation. So it's about priorities and about how one orders your priorities so that you can live a moral life," Warnock said in a press conference addressing the claims.

"Celebrated Fidel Castro and welcomed him to his church" - An ad by Loeffler's campaign accuses Warnock of welcoming and celebrating the late communist leader of Cuba at his church back in the '90s. We can verify that there was an event in which Castro spoke at Abyssinian Baptist Church in New York City in 1995 when Warnock was a youth pastor.

Although the event did take place, Warnock's campaign issued a statement saying he was only a youth pastor and had no role in scheduling or planning the speaking event. When asked specifically if Warnock supported the views and actions of Castro, his team said "of course Reverend Warnock doesn’t agree with the dictator’s beliefs and actions. He also wasn’t making decisions about who spoke at the church when he was a youth pastor."

"Arrested for obstructing an investigation into child abuse " -  The accusation came from conservative Atlanta radio host, Erick Erickson. This claim is true, but needs some context.

In 2002, Warnock was arrested for hindering a police investigation into a child abuse probe at a church camp he worked at near Baltimore, but the charges were dropped. According to Politifact, the prosecutor requested the charges be dropped, issuing this statement - "What we decided was there was some miscommunication that had occurred with them. They were very helpful with the continued investigation. It would not have been a prudent use of resources to have prosecuted them."

"The truth is he was protecting the rights of young people to make sure they had a lawyer or a parent or guardian present when being questioned. Law enforcement officials said the interaction was the result of a 'miscommunication' and later praised him for his help in this investigation," Warnock's campaign said in a statement to 11Alive.