VERIFY: Do experts recommend fire blankets in case of fire?

An 11Alive viewer wanted to know more about a fire blanket advertised on Facebook. 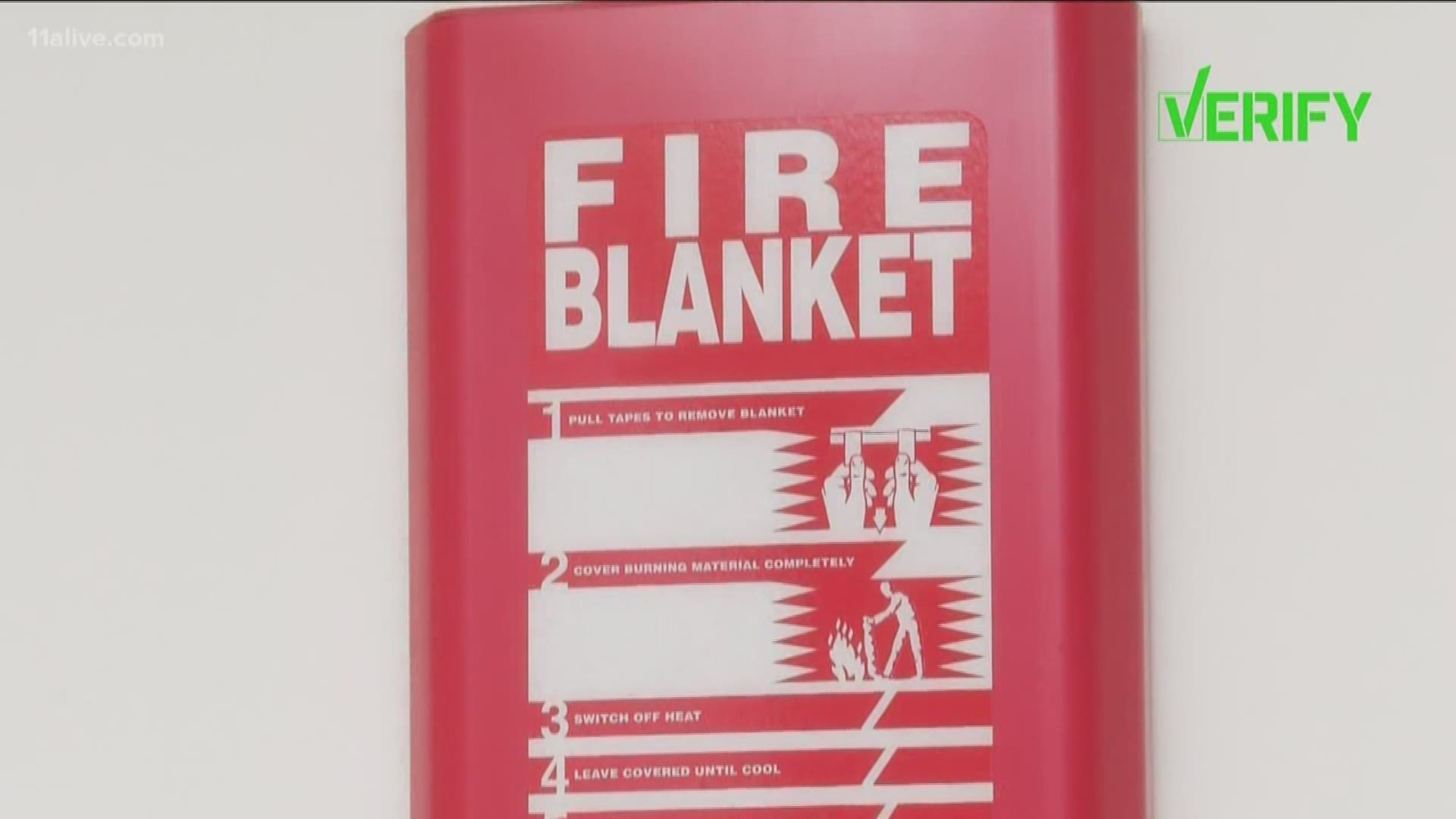 ATLANTA — Heating, holiday decorations, winter weather and candles all can lead to an increased risk of fire during the winter months, according to the National Fire Protection Agency. With that in mind, 11Alive viewer Sophia Johnson asked us to take a closer look at a fire blanket advertisement she spotted on Facebook.

"There's a blanket that's supposed to put out fires…you get this blanket, and you pull it and throw it. Can you verify that for me?" Johnson asked.

11Alive’s Verify team reached out to local, state and national sources for answers.

According to Cobb County Fire officials, fire blankets are not normally used in cooking fire settings, but rather in the movie industry or for pyrotechnic events.

“Smoke alarms should be on each level of the structure and in every sleeping area. We suggest you focus on a good ABC rated fire extinguisher and training on its use,” Captain Joseph D. Bryant with Cobb Fire said in an email.

The office of Georgia’s Insurance and Safety Fire Commissioner also shared insight regarding fire blankets. In an email, a spokesman for the office confirmed that fire blankets are a useful tool, with caveats.

“Fire blankets are a useful tool in the fire safety field. They can be used to contain small to medium fires, especially in the kitchen,” Brandon Wright, public information officer, said.

“However, fire extinguishers are the recommended tool to have in the kitchen to protect yourself in the event of a fire. They allow the user to be a safe distance away from the fire, can be aimed at specific areas to stop fires from spreading, and come in a variety of shapes and sizes to accommodate any user. While fire blankets are a useful tool to keep on hand for protection, fire extinguishers have more benefits for consumers in the event of a fire. Ideally, families will have both extinguishers and blankets in the home, extinguishers to help stop the spreading of fires and blankets in case anyone ever catches on fire.”

11Alive also spoke with experts for the National Fire Protection Association (NFPA). The association, according to a spokesperson, does not endorse or test products and instead, emphasizes prevention and fire safety, advising if there's a fire, get out as quickly as you can, and call the fire department.

In some cases, small kitchen fires can be contained. For some small grease fires, DeKalb Fire officials demonstrated one of the NFPA recommendations: slide a fitted lid over the pot and turn off the stove top burner to smother the flame. Know this: the leading cause of kitchen fires is unattended cooking.

Ultimately, the majority of agencies that we spoke said fire blankets are not a replacement for other safety tools like fire extinguishers and the need for working smoke alarms. Yet, our question as to whether officials recommend the use of fire blankets varied depending on the agency, leaving Sophia’s question unverified.

For those interested in learning more, the Consumer Product Safety Commission confirmed to 11Alive that there are indeed standards for fire blankets:

“We recommend that if consumers are going to purchase a fire blanket, they look for one that complies with ASTM F-1989-05(2013). Fire blankets are not a replacement for other fire safety devices, such as fire extinguishers. Consumers should always have a working smoke alarm."

Here is more information provided by Cobb County Fire on home fire safety and training on fire safety as well as fire extinguisher use.

MORE FROM THE VERIFY TEAM

VERIFY: Does the suicide rate increase over the holidays?

VERIFY: When should you be worried by a fever?