VERIFY: Are Georgia college students being approached by alleged sex traffickers on campus?

Rumors are swirling online, so 11Alive took them straight to the university. 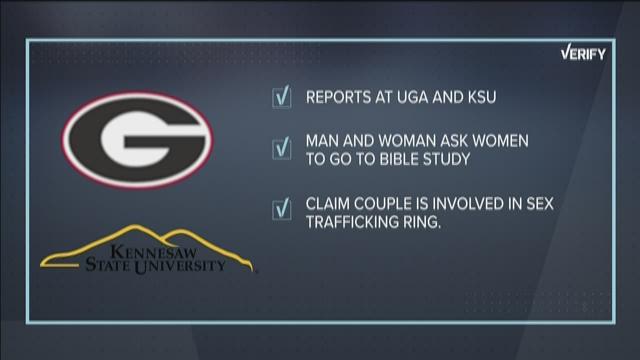 ATLANTA — It's no secret that Atlanta is a hub for sex trafficking, but rumors are swirling online that students at a metro area college campuses are in danger of falling victim to trafficking.

11Alive received multiple tips that a couple is allegedly approaching students on the University of Georgia, Kennesaw State and Georgia Tech campuses to try to talk to them about Jesus. The claim is that it ends up being a ploy to hook the students into human trafficking.

So, 11Alive took those online rumor straight to the universities to find out if there was any truth to those claims.

Are Georgia college students being approached by alleged sex traffickers on campus?

11Alive can VERIFY that these rumors going around on campus are FALSE.

11Alive reached out directly to each school's campus police department to ask whether they were investigating any situation in which students were being approached by alleged sex traffickers.

Greg Trevor with the University of Georgia said directly those rumors are not true. In a statement, Trevor said that UGA Police is aware of people on campus who are approaching students to discus religion, but there is no criminal activity associated with that.

He continued to say that campus police will continue to "monitor the situation" and encouraged members of the university community to report any concerns.

Meanwhile, Kennesaw State University campus police say they have also received reports of folks on campus "engaging with students on behalf of outside groups." While KSU police said they have an open investigation, they said they also have no reason to believe there is a threat to the campus community.

Finally, in a Georgia Tech Campus Police response to a post on Reddit, the department said they began looking into the similar claims after seeing news stories from other places "echoing these concerns."

Their department said while numerous students have come to them, they have found no criminal activity surrounding the group, nor have they seen any missing persons reports related to them.

They reminded students if they're approached by anyone on campus and do not wish to speak to them to "be firm in their declarations." If the person tries to interfere physically, campus police said students should contact an officer immediately.