Here's some clarity on a few of the issues in what can be a contentious debate. 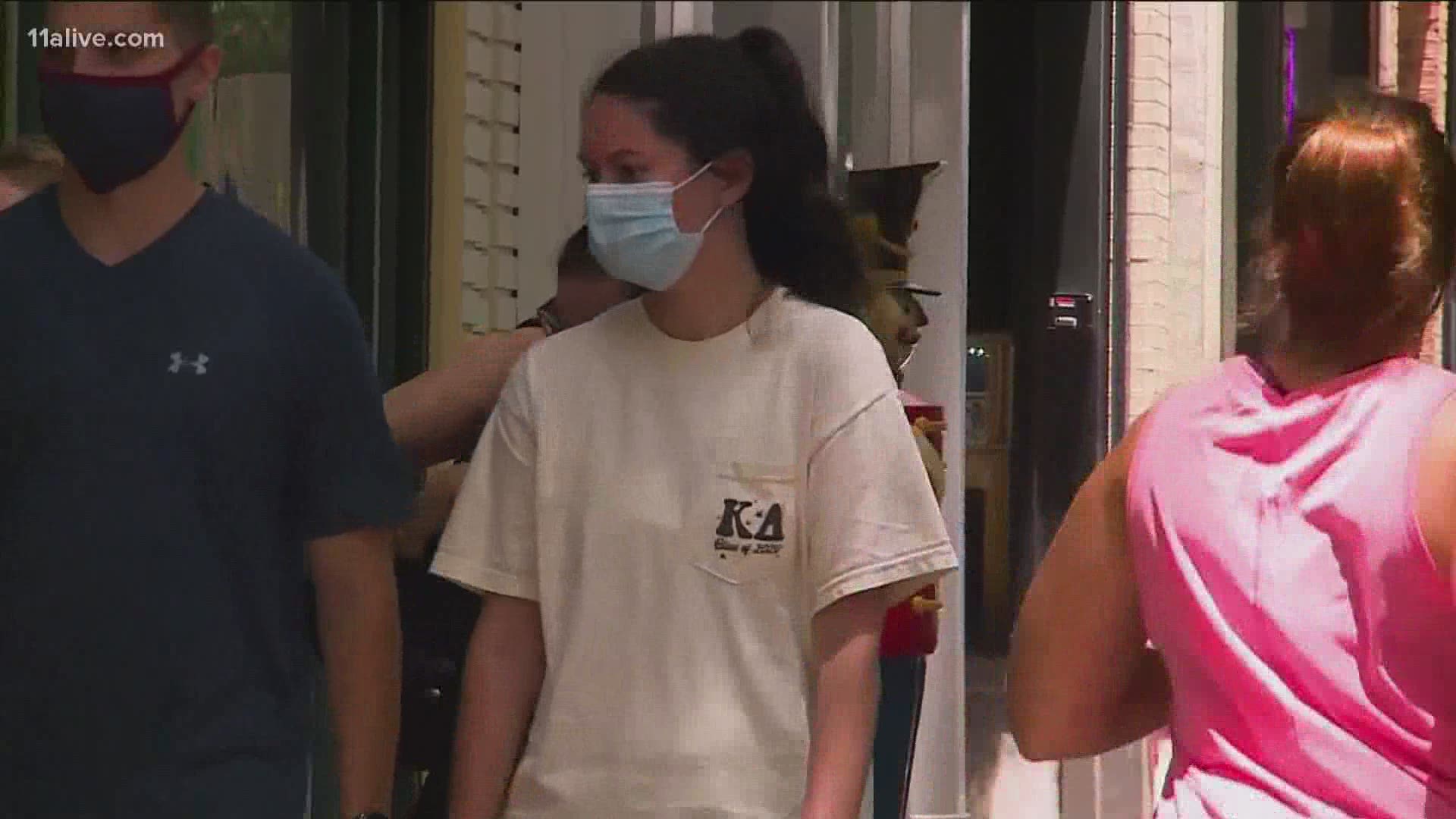 ATLANTA — The issue of masks is becoming a central one in Georgia this week, as COVID-19 cases surge, the governor conducts a statewide tour to promote wearing them, and calls increase to make them a requirement.

The debate over whether to make masks mandatory is at the core of the issue in the Peach State, with Gov. Brian Kemp reluctant to take that step.

We asked you, the viewers, where you stood on masks - and many of you provided thoughtful, compelling answers about why you feel the way you do.

RELATED: The mask debate | Here's why you said you were for or against making face coverings mandatory

Among the many comments our Facebook post received, there were also those expressing popular claims that contribute to some of the confusion and noise surrounding the debate.

Here, we'll try to pierce through some of that fog, and provide some clarity to what masks do and don't do:

Are masks a threat to make you breathe in too much of your own CO2?

This is one of the misconceptions that has circulated widest, and re-circulates most stubbornly.

The thought is that, as we breathe in oxygen and exhale carbon dioxide (CO2), the mask will block the CO2 you breathe out, and over time you will effectively be breathing back in large amounts of that CO2.

A number of medical experts have addressed this one as it's made the rounds on social media, but a particularly succinct answer comes from Dr. Brian Kaminski of ProMedica: "It would actually be impossible for there to be a significant amount of carbon dioxide buildup just because the space in front of the mask is so small that there's just not enough space there for carbon dioxide to accumulate."

Stanford expert Amy Price offers this useful tip: "One way to test if your mask is well made is to try to blow out a candle through the mask from about 1 foot away. If you can’t do so, your mask might be too tightly woven."

As we'll see below, there might be some concern about CO2 if you have a preexisting serious lung issue.

Verdict: C02 inhalation is not a meaningful threat from wearing a mask for just about everybody.

Are masks harmful to people with breathing issues?

The short answer is they can be.

CDC guidelines state that masks should not be worn by "anyone who has trouble breathing."

The American Lung Association dispels the myth that masks might cause low oxygen levels ("The masks are designed to be breathed through and there is no evidence that low oxygen levels occur.") but does say that there is some evidence "prolonged use of N-95 masks in patients with preexisting lung disease could cause some build-up of carbon dioxide levels in the body."

The ALA adds: "People with preexisting lung problems should discuss mask-wearing concerns with their health care providers."

Verdict: If you have a serious lung or breathing issue, wearing a mask possibly becomes more complicated. Talk it over with your doctor.

Does requiring masks make a difference?

Gov. Kemp raised this point on Wednesday, saying, "there's a lot of people that don't believe a mask mandate would work."

The thinking here is that it will be unenforceable, or that people will simply reject or openly defy it and engage in even riskier behavior because they see their rights as being infringed.

The research on whether legal requirements actually do result in widespread of masks is limited, but there's evidence it works to that end.

Dr. Jonathan Lewin, the CEO of Emory Healthcare, cited two data points: One a study by Goldman Sachs that found more mask-wearing in places where there was a mandate - rather than a strong suggestion - in place.

The second data point was his own hospital system: "We've learned at our own hospital that when we simply strongly encourage facemasks, we still saw community spread. We saw someone would come in and spread it to their colleagues. When we required masks, we saw our infection rates within our workforce plummet to near zero," he said.

Verdict: It's not a well-studied subject, but the evidence we have suggests mandates result in more mask-wearing.

Will masks not actually protect you, personally, from getting COVID-19?

This isn't an easy question to answer directly, but it's perhaps helpful to answer it this way: It will if everyone cooperates.

It's generally accepted that the kind of masks most people are using are to keep you from spreading your particles to others - they aren't that great at strictly keeping you from inhaling viral particles. But they're also not completely ineffective.

Vanderbilt University infectious disease expert Dr. William Schaffner told LiveScience one of the simple issues is that regular surgical masks or the cloth kinds of masks a lot of people are wearing are "not nearly as tightly fitted around your nose and cheeks," allowing for more viral particles to slip through and into your system than a solid hospital-grade N-95 mask would.

But that doesn't mean they don't keep any particles out.

The American Lung Association estimates N-95 masks keep out 95% of viral particles, while regular masks keep out something considerably less than that. But, they note, "even a 50% reduction in viral transmission is statistically important."

University of California San Francisco infectious disease specialist Dr. Peter Chin-Hong puts it this way: “I think there’s enough evidence to say that the best benefit is for people who have COVID-19 to protect them from giving COVID-19 to other people, but you’re still going to get a benefit from wearing a mask if you don’t have COVID-19."

Maybe consider it as a social phenomenon: The goal is fewer particles flying around. If you wear a mask, and your participation encourages others to do so as well, that means fewer particles ultimately flying your way.

Verdict: Common masks aren't considered highly effective at keeping you from breathing in viral particles, but they're not zero percent effective either, especially when you consider the value of social reinforcement.

Are masks necessary outside?

This might be the most difficult question to cut through of them all.

We had a number of viewers say they were comfortable wearing a mask in a building or other confined space but drew a line at wearing them around outside.

The CDC seems to acknowledge the outdoors present less risk under certain circumstances: "People who are engaged in high-intensity activities, like running, may not be able to wear a cloth face covering if it causes difficulty breathing. If unable to wear a cloth face covering, consider conducting the activity in a location with greater ventilation and air exchange (for instance, outdoors versus indoors) and where it is possible to maintain physical distance from others."

An article on Harvard Medical School's publishing website also notes the coronavirus isn't as likely to spread outdoors: "A recent study found that in a confined, laboratory setting, droplets containing viral particles can remain afloat for eight to 14 minutes. Smaller infectious viral particles, called aerosols, can drift around in the air even longer.

"Outdoors, air currents are more likely to scatter and dilute the virus, making transmission less likely than in a home, office, or other confined space with limited air circulation."

But the recommendation the article makes is still that "it's important to maintain a physical distance of at least six feet and wear a mask, to reduce risk even further."

Verdict: The risk of spread outdoors isn't as high as indoors, but a mask certainly doesn't hurt, and if you're not maintaining a distance you'll be erasing any extra safety the open air gives you.

Does wearing a mask pose any health risks?