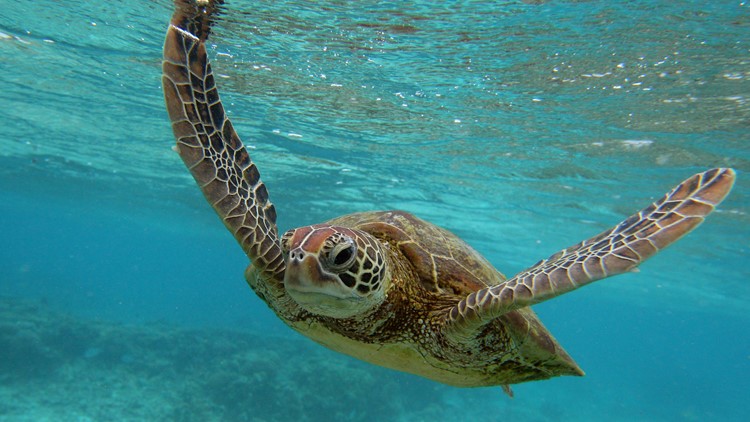 Photo by: Getty Images
LADY ELLIOT ISLAND, AUSTRALIA - JANUARY 15: A Hawksbill sea turtle is seen swimming on January 15, 2012 in Lady Elliot Island, Australia. Lady Elliot Island is one of the three island resorts in the Great Barrier Reef Marine Park (GBRMPA) with the highest designated classification of Marine National Park Zone by GBRMPA. The island of approximately 40 hectares lies 46 nautical miles north-east of the Queensland town of Bundaberg and is the southern-most coral cay of the Great Barrier Reef. (Photo by Mark Kolbe/Getty Images)

VERIFY: Does 90% of ocean plastic come from 10 rivers in Africa and Asia?

An image posted in September 2019 was spread around Facebook with the following message: Americans’ plastic straws--and plastic waste in general--is not the problem when it comes to ocean trash.

Is the information in this image true?

Some of the stuff in it is correct or nearly correct, but much of it is wrong, including the major claims made at the bottom.

First of all, the information about the sea turtle itself is correct. This sea turtle was found in 2015 and, according to articles from that time, had been discovered near Costa Rica.

And it is true Costa Rica has had a trash dumping problem. A report from 2010 concluded that 250 tons of trash were illegally dumped into rivers and streets.

However, it’s notable that this trash is illegally dumped. Costa Rican law bans dumping trash directly into rivers, just like the United States does. That runs contrary to what the image is implying when it contrasts Costa Rica’s dumping problem with the United States’ ban on dumping.

The claim about the ten Asian and African rivers incorrectly refers to a study from 2017. The study states, “the 10 top-ranked rivers transport 88−95% of the global load into the sea.” However, that data refers to all trash transported from rivers to the sea only. That means about 88-95% of trash which flows from rivers to oceans comes from those 10 rivers (eight of which are in Asia and two of which are in Africa). One of the researchers even came out and said that this does not refer to all sources of ocean trash.

Not everyone agrees on those numbers either. The Ocean Cleanup, a charity dedicated to preserving the world’s seas, estimates that 80% of river plastic emissions entering the oceans comes from 1000 rivers. Only one of those rivers, the Delaware, is in the United States. It’s worth noting their findings are still under scientific review.

It’s also not true that Americans create almost none of the ocean’s plastic. A 2015 study estimated that the U.S. put the 20th-most plastic into the ocean among all coastal countries. It estimated this by calculating the amount of coastal mismanaged plastic waste a country produced. While there are other countries that do generate more ocean plastic waste, it is untrue to say the U.S. creates "almost none."

This image is a good example of how misinformation can spread on social media, how you can detect it, and how you can try to navigate it. If a claim doesn’t cite any sources for its data, approach it with skepticism. If you try to fact-check the claim yourself, don’t just assume it’s all true or all false based on the first piece of information you check. Many images like this have a mix of true and false information.