VERIFY: Is pollution from a leaf blower equal to a cross country drive? 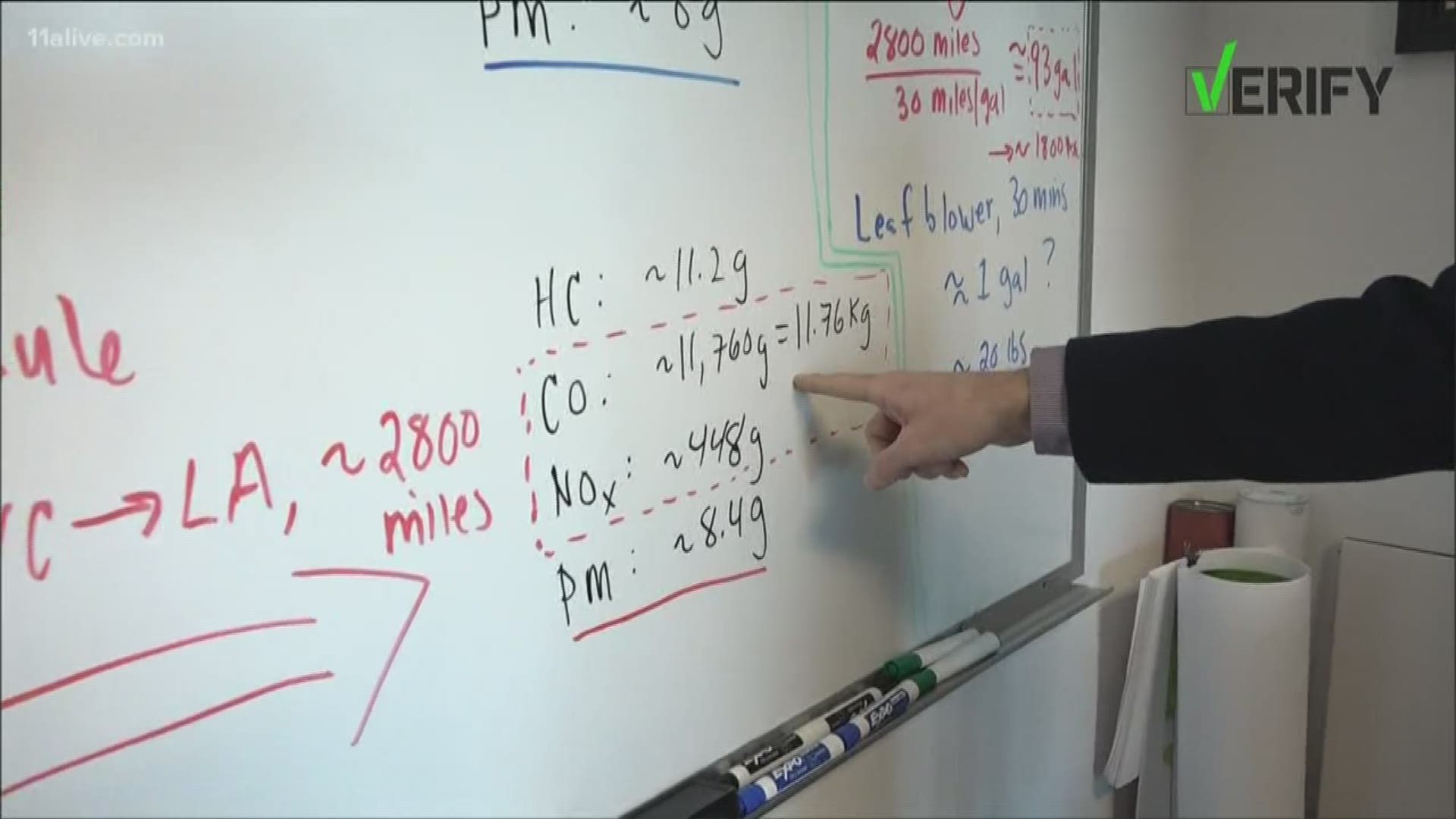 ATLANTA — Gas-powered leaf blowers may be helpful for cleaning yards, but they are often a target of criticism, even facing bans in some cities due to environmental concerns.

11Alive viewer Patricia Stone asked us to take a closer look at a popular pollution claim.

"Commercial leaf blowers certainly create noise pollution, but their uncontrolled emissions are worse," Stone said. "I heard that the hydrocarbons emitted in 30 minutes equals driving a pickup truck several thousand miles. Can this be true?"

Such concern over gas-powered leaf blowers is not new. The claim cited by Stone stems from a 2011 report from auto research firm Edmunds.

The group found a half-hour of yard work with a two-stroke leaf blower is about the same as driving a truck from Texas to Alaska.

The standards as updated in 2000 required a 70 percent reduction in hydrocarbons and nitrogen oxide emissions, two common types of air pollutants.

Professor Leamy helped 11Alive compare emissions of trucks and leaf blowers using a 2015 EPA analysis on lawn equipment. Keep in mind: most vehicles are four-stroke engines and cleaner than a two-stroke, which needs oil added for lubrication.

"If you look at the unburnt hydrocarbons you find that this leaf blower in 30 minutes of operation...is, in fact, emitting more hydrocarbons than driving an f 150 or any light-duty pick up from New York City to Los Angeles,"  Leamy said.

But considering other types of emissions, Leamy found a different result.

"Carbon monoxide and nitrogen oxide...those are far far greater in driving your pickup truck from New York City to LA," he concluded.

Ultimately, it's kind of apples and oranges. Sources show a gas-powered leaf blower can emit more hydrocarbons than driving cross country, but there are a lot of variables. For instance, the engine, the year, the type of pollutant can all play into which engine is worse.

11Alive also reached out to the Outdoor Power Equipment Institute for a statement on leaf blower emissions:

Small engines, including those used in outdoor power equipment such as leaf blowers, grass trimmers, and lawnmowers have been federally regulated for nearly 25 years. As a result of these regulations and advancements in small engine technology, many applications have reduced emissions as much as 90 percent compared to pre-regulated days.

Manufacturers have invested millions of dollars and more than 15 years of research into the development of quieter leaf blowers. Many modern leaf blowers are as much as 75 percent quieter than blowers manufactured just a decade ago." - Chuck Bowen, Dir. of Communications and Member Relations