The President suggested that this LSU team may be the greatest of all time. 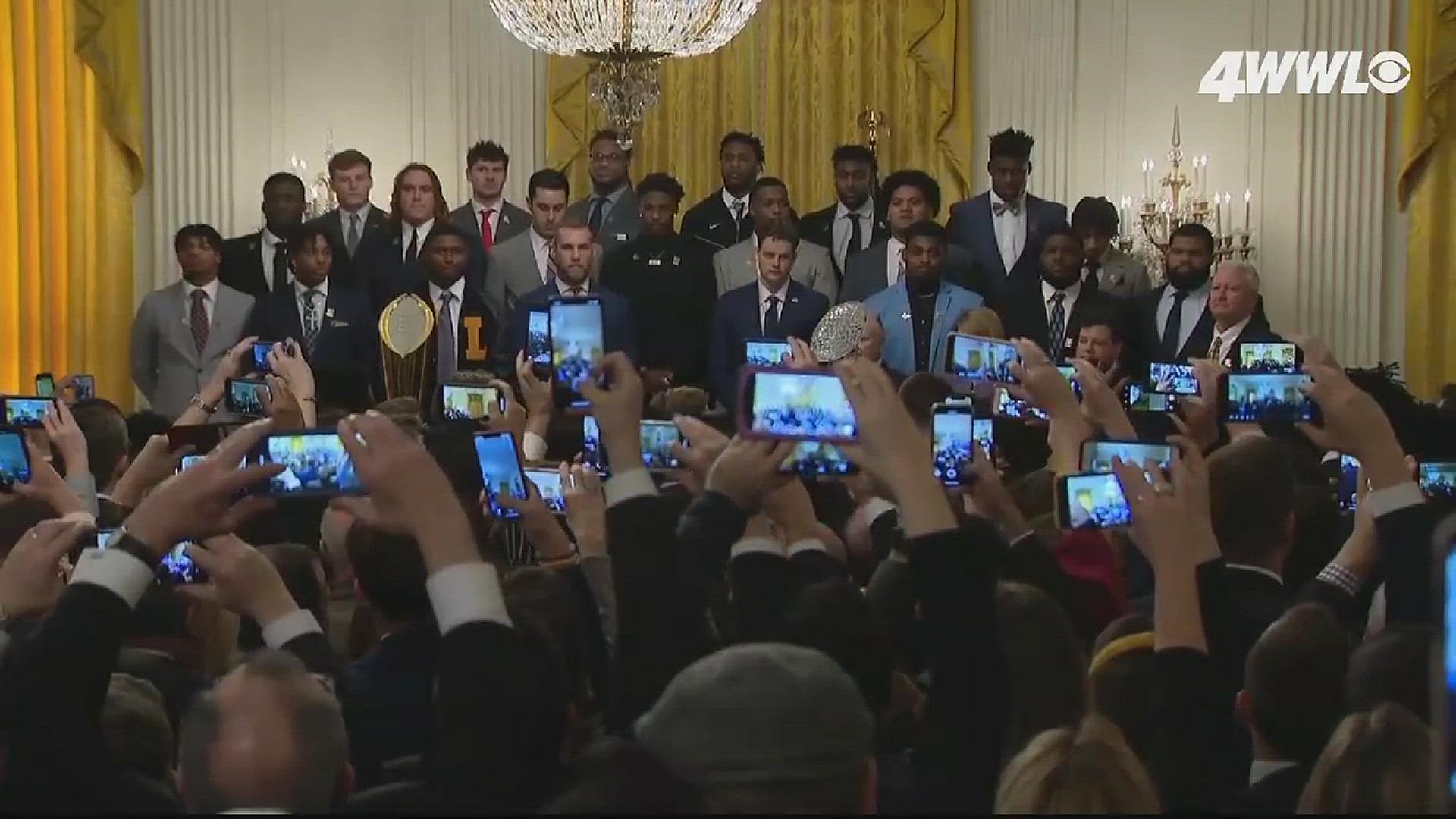 WASHINGTON, D.C., USA — The Tigers are at the White House!

President Donald Trump is honoring the undefeated National Champion LSU Tigers in Washington D.C. today after their 42-25 victory over Clemson on Monday.

During the ceremony, The President speculated that the 2019 LSU Tigers might be the greatest team in college football history.

"(Coach Ed Orgeron) did a job that few people will ever be able to do again," he said. "The team is said to be one of the greatest teams, maybe the greatest team in the history of college football and that's pretty amazing."

The President listed LSU's accolades, highlighting their record-setting offense and the strong list of teams they beat during the season. He also touched on the tragic death of Carly McCord, a Louisiana sports reporter and the daughter-in-law of Offensive Coordinator Steve Ensminger. McCord died in a plane crash on her way to watch her father-in-law coach in the Peach Bowl.

"This team showed the world what it means to look out for one another ... In the face of a heartbreaking tragedy he rallied behind offensive coordinator Steve Ensminger," Trump said. "Coach said you never wavered."

RELATED: LSU fans have so much to celebrate even as OBJ controversy plays out

Quarterback Joe Burrow spoke briefly during the ceremony before presenting The President with his own LSU jersey.

"I'm sure Mr. President has some more pressing matters to get to, but I just want to say it's truly an honor to be here and thank you for having us so soon after the game so the seniors could be here that means a lot to us. This is a moment we'll never forget," Burrow said. "This was a great season and this is a great way to cap it off."

Trump took a few moments to list his own accomplishments in office as well and get a few jabs in at the impeachment trial beginning in the senate.

While inviting the players to take photos with him in the Oval Office, Trump said that there have been several good and "not so good" presidents that have worked there.

"... but you've got a good one now! Even though they're trying to impeach the son of a bitch! Can you believe that?" President Trump laughed. "We've got the greatest economy we've ever had, Joe! We've got the greatest military! We rebuilt it! We took out those terrorists like your football team would've taken out those terrorists, can you believe it?"

LSU will be the second Louisiana champions to visit the White House in recent months, after the Eastbank All-stars from Jefferson Parish won the Little League World Series and were invited to D.C. to celebrate last fall.

LSU will return to Louisiana to celebrate their victory with a parade in Baton Rouge.