You can't tell the story of Final Four Saturday without regaling the heroics of Christian Laettner, Akeem Olajuwon, David Thompson and Frank Kaminsky. 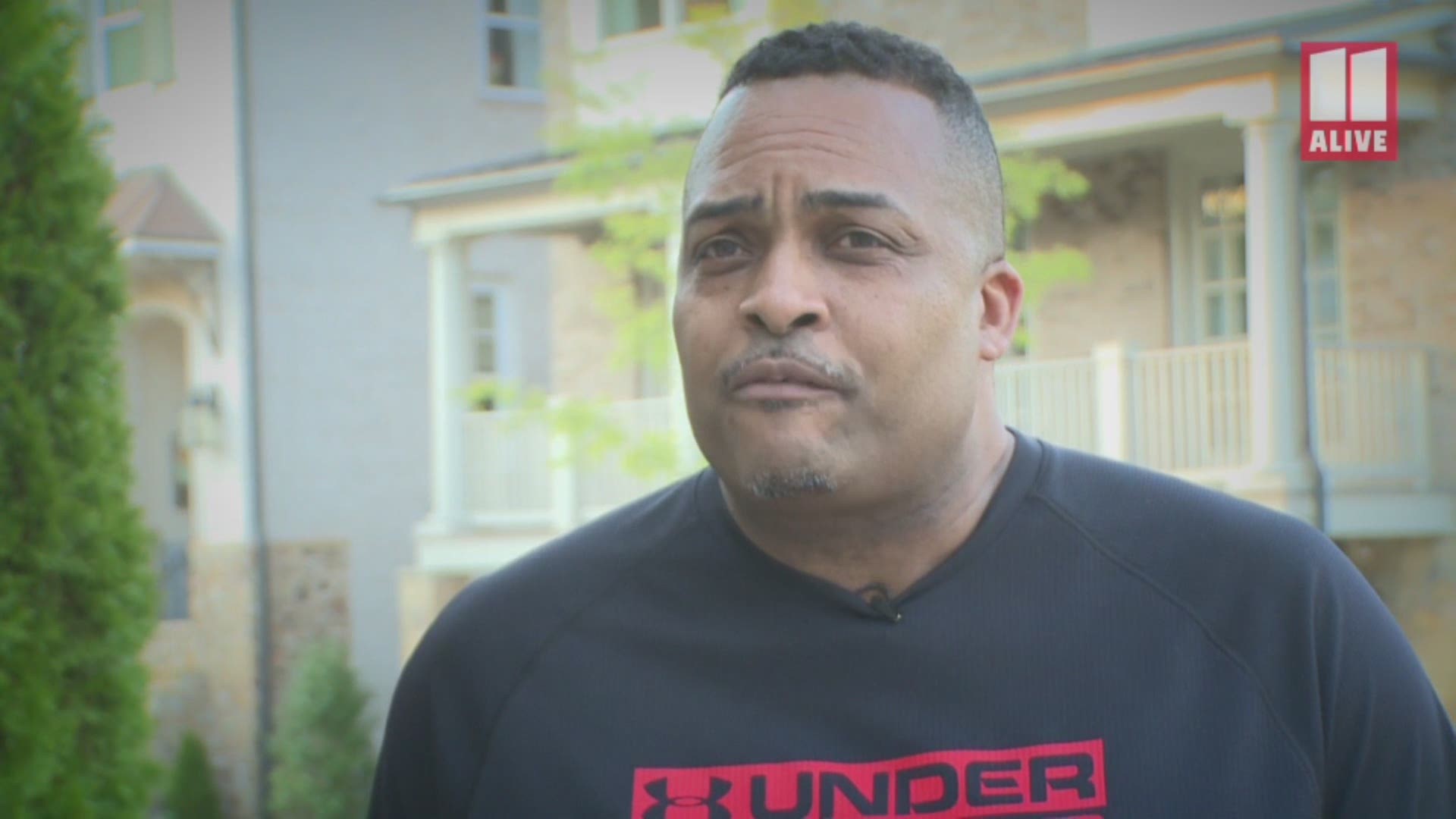 As we celebrate the 80th anniversary of the NCAA men's basketball tournament, 11Alive Sports presents a countdown of the 15 greatest (or most significant) games during Final Four Saturday.

The term Final Four Saturday may be universal to the sporting public now, but it's also relatively loose in tone – since the national semifinals used to be held on Thursdays in the 1960s and 70s.

VILLANOVA 92, WESTERN KENTUCKY 89 (2OT)
RANKING: 15
YEAR: 1971
SKINNY: Let's start with a Final Four classic which holds a dubious place in modern history, comprising not one, but two teams (Villanova, Western Kentucky) that would eventually vacate tournament victories – due to competing with ineligible players.

And that's a real shame, since Villanova's Howard Porter sparked the Wildcats to a scintillating 92-89 win over the Hilltoppers, needing double overtime to earn a spot in the championship game.

Everything changed in the championship game, though, as UCLA kept Villanova under wraps and earned a 68-62 victory, serving as the Bruins' fifth straight NCAA title.

MICHIGAN 81, KENTUCKY 78 (OT)
RANKING: 14
YEAR: 1993
SKINNY: This game would have a substantially higher ranking in the countdown, if Michigan hadn't been forced to vacate its wins from the 1992-93 season down the road, as part of the Chris Webber/Ed Martin scandal..

On Final Four Saturday in New Orleans, the CBS audience was treated to a heavyweight matchup of No. 1 seeds, top-notch coaches (Rick Pitino vs. Steve Fisher) and a flood of eventual first-round picks in the NBA draft.

Plus, this was at the height of Michigan's Fab Five fame, a pulse-pounding, yet turbulent period which certainly changed the culture of college basketball and the apparel business, at large.

But here's the fascinating part of this triumph:

No Wolverines player buried a single three-point attempt, a surreal feat that would never fly in today's three-and-D game.

The ball was initially tipped by UNC-Charlotte's Cornbread Maxwell, but recovered by Marquette forward Jerome Whitehead ... who power-dribbled to the basket before awkwardly dunking the ball before the buzzer.

It marked one of the most controversial endings in tournament history.

However, as the video clip would attest, Whitehead cleanly got rid of the ball before the clock struck zero.

However, senior forward Al Wood stole the show on Final Four Saturday in Philadelphia, exploding for 39 points (25 in the second half) and single-handedly carrying UNC to a berth in Monday's title game.

The euphoria of Wood's masterpiece soon would wash away, based on two occurrences:

a) Isiah Thomas and the Hoosiers clamped down on UNC in the championship game, rolling to a 63-50 victory.

b) On a grander scale, the championship game was nearly postponed, due to the assassination attempt on President Ronald Reagan earlier in the day.

(Watch this clip ... and be amazed by the eerie silence of announcers Dick Enberg, Al McGuire and Billy Packer, when NBC had switched back to network coverage of President Reagan in the hospital.)

DUKE 90, NOTRE DAME 86
RANKING: 11
YEAR: 1978
SKINNY: We'll keep this one short and sweet: If the NCAA had adopted the three-point line in the 1970s, the Duke-Notre Dame clash might have ended up as the highest-scoring Final Four Saturday game in history.

This held true for the 2004 Final Four in San Antonio.

In the opener, Georgia Tech's Will Bynum drove through the Oklahoma State defense for a game-winning layup off the high glass with just 1.5 seconds left.

A few moments prior, OSU's John Lucas III buried a long three-pointer to knot the score at 65.

For the nightcap, pitting superpowers Duke and Connecticut, the Huskies (led by Emeka Okafor's 18 second-half points) scored the game's final 12 points to collect a miraculous win over the Blue Devils – preventing the first all-ACC national championship in tournament history.

Of course, that blowout came prior to Michigan coach Bill Frieder secretly accepting the head job at Arizona State two days before the NCAA tournament – spinning forward a series of dramatic events that led to U-M athletic director Bo Schembechler firing Frieder (on the spot) and tapping assistant Steve Fisher to guide the battered and bruised Wolverines in tourney action.

On Final Four Saturday, Michigan pulled out a last-second win over the favored Illini, thanks to Sean Higgins' short put-back off a missed three-pointer from forward Terry Mills.

DUKE 95, MARYLAND 84
RANKING: 8
YEAR: 2001
SKINNY: The Duke-Maryland rivalry has long been a contentious one, but the stakes were never higher than 18 years ago on Final Four Saturday.

And early on, it was all Maryland, which sprinted to separate leads of 27-9 and 39-17 ... before falling from grace in the second half.

Led by Shane Battier (25 points), the Blue Devils pulled off a serious comeback, storming to a 95-84 win in the national semifinal.

Interestingly, the 2001 Blue Devils won all six of their NCAA games by double digits.

INDIANA STATE 76, DEPAUL 74
RANKING: 7
YEAR: 1979
SKINNY: For this countdown, Larry Bird likely produced the greatest single performance of any player, rolling for 35 points (16 of 19 shooting), 16 rebounds and nine rebounds against DePaul on Final Four Saturday, while advancing No. 1 Indiana State (33-0) to the championship against Magic Johnson's Michigan State Spartans.

Bird, who had already been drafted by the Celtics in 1978 (the NBA permitted teams to pre-draft college juniors back then), was just becoming a national phenomenon, due to the small size of Indiana State's Terre Haute campus.

However, the win over DePaul might have forever changed the perception of Bird's polished talents.

At the very least, it set the stage for the largest TV audience in NCAA hoops history (35-plus million viewers ... 24.1 Nielsen rating), as Magic beat Bird in the national title game – ushering in a new age of tournament hysteria during March.

Or Madness, if you will.

UCLA 75, LOUISVILLE 74
RANKING: 6
YEAR: 1975
SKINNY: On the heels of UCLA's dramatic win over Louisville in the Final Four round, legendary coach John Wooden revealed the NCAA final would be his last game.

Looking back, though, the Bruins were lucky to reach the championship, rallying from a four-point deficit in the final minute to force overtime ... and then getting a small miracle in the extra session, when Louisville guard Terry Howard – who apparently hadn't missed a free throw all season – booted a one-and-one with the Cardinals clinging to a one-point lead with 20-plus seconds left.

In 1975, there was no three-point line or shot clock ... meaning that if Howard had nailed both free throws, Wooden likely would have missed on his 10th national championship with the Bruins.

INDIANA 97, UNLV 1993
RANKING: 5
YEAR: 1987
SKINNY: Heading into the 1987 Final Four, Indiana and UNLV both were viewed as great teams ... but with drastically different styles of play.

The Hoosiers were cool, methodical and efficient, taking their cues from senior leader Steve Alford.

The aptly named Runnin' Rebels, in turn, were a frenetic bunch that wanted to push the ball on every single possession. The fact that Indiana defeated UNLV was only a mild surprise.

The real shocker comes with this: Thirty-two years later, the Hoosiers and Runnin' Rebels still boast the highest-scoring Final Four tilt in NCAA history – thanks to Alford's 33 points and Freddie Banks' 10 three-pointers for UNLV (still a record for Final Four weekend).

WISCONSIN 71, KENTUCKY 64
RANKING: 4
YEAR: 2015
SKINNY: We can already hear the Badgers faithful screaming in unison, How can you, a Big Ten alum (Michigan State) rank this at No. 4 ... when it's on the short list of greatest upsets in college basketball history?

That's a fair beef, for sure. But at the same time, this classic falls just achingly short of eclipsing (in no particular order) ... the most jarring upset in Final Four history, the greatest dunk-a-thon in Final Four history and the end of a dynastic streak of consecutive NCAA championships that will never be duplicated on the men's side.

Now, let's celebrate the greatness of this game:

a) Kentucky entered Final Four weekend at 38-0 and ranked No. 1. By extension, the Wildcats were vying to become the first undefeated national champion since Indiana in 1976.

Think about that for a second.

While playing against top-notch competition, the Wildcats were uber-dominant for two-thirds of their games (and this doesn't include blowouts of 15-19 points).

So, instead of being fearful of the Kentucky brand, the Badgers (led by Frank Kaminsky, Sam Dekker, Nigel Hayes, Traevon Jackson, Bronson Koenig) were actually craving for a rematch in 2015.

During the national semifinals in nearby Greensboro, N.C., the Wolfpack – led by Tom Burlison, Monty Towe and the incomparable David Thompson – outlasted Bill Walton and the Bruins, rallying from a large deficit in double overtime.

HOUSTON 94, LOUISVILLE 81
RANKING: 2
YEAR: 1983
SKINNY: North Carolina State's victory over Houston (aka Phi Slama Jamma) in the 1983 final will forever be punctuated by Lorenzo Charles' dunk off Dereck Whittenburg's desperation airball before the buzzer ... and coach Jim Valvano charmingly running around the court.

Leading into the title match, though, Houston-N.C. State actually was viewed as a potential snoozer, with the real championship game taking place two days earlier.

On Final Four Saturday, Houston and Louisville, the top-ranked teams in the country, combined for 175 points and nearly 30 dunks – while also conquering the high altitude of Albuquerque, N.M.

On the flip side, the Blue Devils – led by Christian Laettner, Bobby Hurley, and freshman Grant Hill – were still being ridiculed for getting fleeced by UNLV (103-73) in the 1990 NCAA final.

Things would be different the following year. Late in the 1991 semifinal (Indianapolis), Hurley buried a super-clutch three-pointer, tying the score.

A few minutes later, Laettner coolly nailed a pair of free throws to put the Devils up by two with 12.7 seconds left.

On its final possession, UNLV couldn't get off a clean shot from short range, sealing Duke's landmark upset.

Two nights later, the Blue Devils would claim the first of five national titles in the Coach K era.