An American love story at the Peachtree Road Race 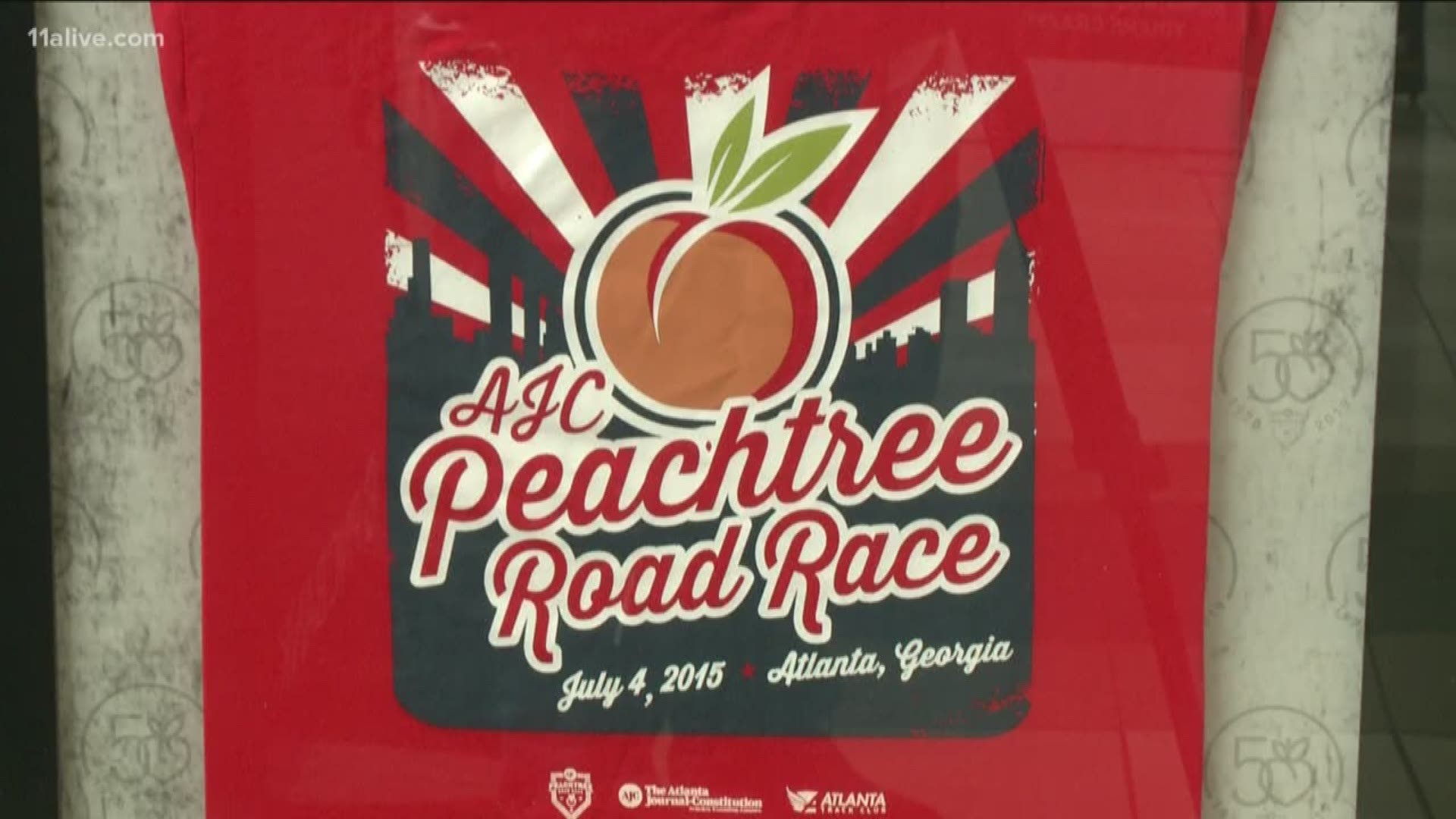 ATLANTA — By Jay Holder
In American folklore, Betsy Ross and Uncle Sam were never romantically connected. Ross, a real historic figure who sewed the first American flag, and Uncle Sam, a fictional character created to drum up patriotism during the War of 1812, would have missed each other by a generation. Not to mention one of them not being a real person.

But they’re a husband-and-wife team in Atlanta every July 4, when "Betsy and Sam" are "Paula and Reg," who proudly hold the finish-line tape for the four winners – men’s and women’s open and men’s and women’s wheelchair – of the world’s largest 10K.

It all began almost on a whim. Paula Barnes had moved to Atlanta in 1977 and over the next five or six years watched or ran the race, so she had quickly become familiar with the rapidly growing July 4th tradition.

Then in 1983, fresh out of Emory Law, Barnes got an unusual request from friends Joanne and Neal Stubblefield, race volunteers. “It had just sort of been random people holding the finish tape,” said Neal Stubblefield who served as finish line director at the Peachtree from 1980-1988.

“We happened to be having a conversation and Joanne said, ‘How about we have Betsy Ross and Uncle Sam?’”

The original Betsy and Sam held the tape for one race and decided it wasn’t for them, so Barnes, who worked with Joanne Stubblefield at the time, was called into action.

"I guess [Joanne] thought I had the wherewithal to do something so silly – you know, you wear those big costumes and it's a little bit warm – and I did it, and I just loved it,” Barnes said. Since it takes two to hold the tape, Barnes recruited her then-husband to suit up as Uncle Sam.

A Peachtree tradition was born.

Looking toward the 50th Running of the race, Barnes is 35 years into the one-day-a-year job. General counsel for the Centers for Disease Control, the 63-year-old is a fixture at the finish line with her husband of three years, Reg, the Peachtree’s fourth Uncle Sam.

Reg, 61, a retired pharmacist and CPA, certainly never expected to play such a big part in the Peachtree. He’s not a runner, but when he started dating Paula seven years ago, Peachtree was part of the deal.

Even though their jobs last only a matter of seconds, race day starts early – and for years, it used to be even earlier because until 2018 the Barnes traveled into the city from their home in Fayetteville.

Now living in Midtown, they are up at 5 a.m. and putting on their costumes, pulling them from the dry-cleaning bags in which they were placed soon after the last race. (Purchased years ago, the Uncle Sam suit had to be altered for Reg, who is taller than his predecessors.)

Reg dons his bowtie while watching a YouTube video, because he forgets how to tie it. He picks a different one every year. Paula brushes up on her Betsy Ross facts so she can answer any questions. Her favorite bit of trivia is that Ross changed the original six-point star on the flag to a five-point star because it was simpler to sew.

Volunteers, spectators and race day staff start asking for photos as soon as the Barnes arrive at Piedmont Park well before sunrise, because who doesn’t want a selfie with Uncle Sam and Betsy Ross?

They finally make their way to volunteer check-in and find the finish line coordinator to get a rundown of the day. On what side of the road will the wheelchair racers finish? What about the open men? And the open women? The script at the finish line is carefully orchestrated and, with only seconds to spare, everything has to happen as planned. The slightest slip-up could become an embarrassment on national television. 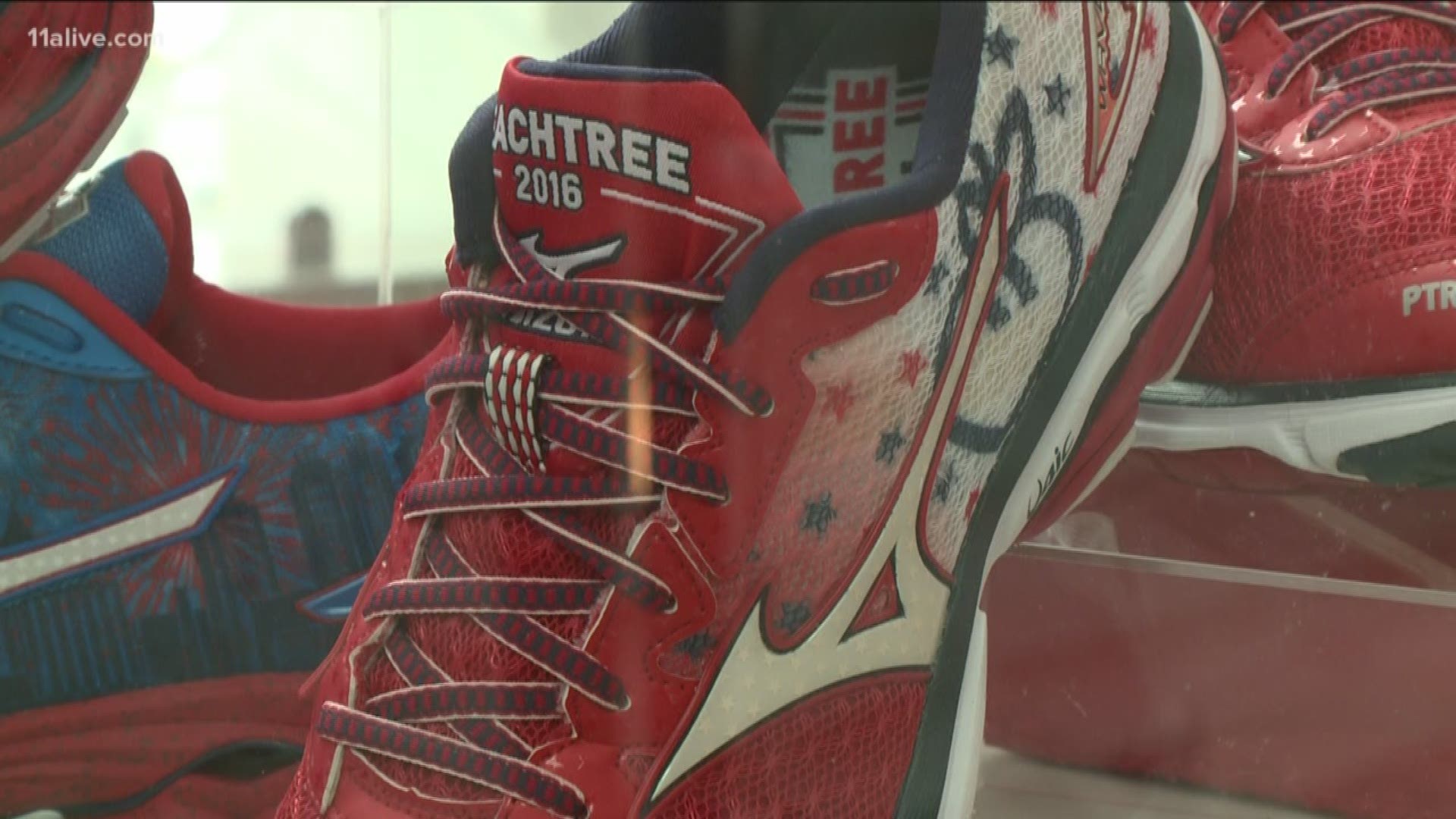 There's a reason Betsy Ross and Uncle Sam are an important part of the Peachtree story and yet have never made a headline. "We are a bit professional about this. We want to make Atlanta Track Club proud and the city proud, so we take a lot of pride in trying to get it right," said Paula.

"They are amazing and dedicated," said Caryn Lamphier, a volunteer coordinator at Atlanta Track Club who works at the Peachtree finish line. "They know exactly what they are doing and show up happy, smiley and ready to add a special flair to the day,"

First across the line are the wheelchair racers, topping 30 miles an hour as they fly down 10th Street.

"Sometimes finding the female [amid the male wheelchair racers] is still a bit of a challenge because of the speed," said Paula. "They’re crouched forward, and they’re coming at such a high rate of speed. Most years we get her, but some years we decide that there's a safety issue there."

Then comes the footrace. “I will tell you, when the runners come up over that hill, and you've got the helicopters above, and you can hear the cheer of the crowd – it so moving,” said Paula, for whom the moment has lost no luster over the decades.

After all these years, the Barnes don’t need much direction. They step out onto 10th Street, the finish-line tape outstretched with the words "AJC Peachtree Road Race" facing the throngs of cameras.

Just as the winner makes the slightest contact with the tape, they let it go.

There have been close calls. Just this past year, Bernard Lagat went to the wrong side of the road after misunderstanding a signal from a volunteer. The Barnes had about five seconds to dash across the road to catch Lagat, who was sprinting.

“At the last second, if you look at the AJC, [the finish-line tape] looked perfect, but a second or a second and a half before that, it was twisted and you couldn’t have read anything,” recalled Reg.

And there have been photo finishes. The Barnes remember Ben Payne appearing to celebrate victory a split second too early in 2015 only to have Scott Overall sneak by at the last instant. “We were right there like, ‘Oh my gosh!’ We felt for the guy, but, you know, things happen,” said Paula.

Even after the final winner breaks the tape, the Barnes’ day isn’t over and their smiles don’t stop. They stick around to congratulate the masses, give high fives and pose for more photos. They’ve been asked to help keep people moving through the chute and even spot runners in need of medical assistance.

It’s slow and sweaty going as the Barnes make their way through The Meadow back to their car, with hundreds more photo requests – Reg said that if you look closely at pictures, you can see clear evidence that their costumes don’t breathe. But that’s not a complaint: Everyone else is hot and sweaty too, they point out.

"It’s such a special day because it's one of those few days where you find everybody is really in a good mood," said Paula, who vows to continue for as long as Atlanta Track Club will have her – and for as long as she fits in the costume. "And you can see people that are going to spend the day just enjoying life."

Still in costume, a post-race breakfast in Virginia Highland – where they’re greeted by cheers and high fives – is a tradition. Then, the costumes go back to the dry cleaner and Sam and Betsy go back to being a lawyer and retired pharmacist until next July 4.

"We enjoy it because we enjoy each other. We enjoy people and people enjoy us because they can see us enjoying each other," said Reg. "We're celebrities for about 24 hours once a year, and then we go back to our usual lives."