Cancer almost kept her from the race. But, she claimed victory at the finish line.

Two days before the AJC Peachtree Road Race, she wasn't sure she could do it. But, a Metro Atlanta woman finished the race just weeks after her last chemo treatment.
Author: Hope Ford
Published: 10:26 PM EDT July 4, 2019
Updated: 11:28 AM EDT July 5, 2019

ATLANTA — A few days before the AJC Peachtree Road Race, Jean Turner called 11Alive's Hope Ford. Turner told her, she might not be able to participate in the race this year, because of health complications.

But, Turner doesn't give up easily. On the day of the race, she texted Ford, writing "I'm a 2019 PTRR Finisher!"

The retired Army Lieutenant, wife and mother of three loves a good race. Turner even has a room in her home dedicated to all her medals.

"Half-marathon, 15Ks, 10Ks, 5Ks, and another wall of 5Ks," she said, walking around the room beaming with joy.

"Being active duty military, you run anyway. That's part of our training, part of our physical fitness. But, my first race when I returned for deployment, was the Peachtree Road Race," she said. "That July. That was my first distance run in the states."

RELATED: Here's what you missed at the 50th running of the AJC Peachtree Road Race!

Turner has run the AJC Peachtree Road Races since 2007. But, the 2019 race would mean something different.

"I just happen to go to the ER one morning because I was short of breath, and they did a chest X-ray, and they said, 'oh, there's a spot on your lung'," she recalled.

In 2018, she hit a wall. Doctors found a tumor, and it was malignant and growing.

"It's hard to take someone like me who is perfectly healthy, had no health issues, on no medications and then you go from that to having a malignant tumor, to chemo in zero to five seconds," Turner explained.

RELATED: Runner reclaims AJC Peachtree Road Race after cancer took her from it

Her life changed mid-stride - surgery, medication and even a bout of depression.

"I was bawling, in my room in my bed one day," she described. "I was just so tired. I was tired, you get so tired of feeling bad. So that was my worst day, toward the end of treatment."

Her best day would come soon after.

"That was the day I rung the bell. May 30th. Even now, I feel like I want to cry because it got rough. It got rough. You just feel so blessed because you go through that," Turner said, voice cracking. "I'm a soldier, I'm a fighter, I've always considered myself a warrior, and I wasn't going to let it defeat me."

And through it all, her runner's high was as euphoric as ever.

"I did three 5Ks during my treatment," she said.

Nine months of chemo took a toll. She couldn't run them, but still power-walked and made it through all three races.

"I went from anywhere between an eight to 10 minute mile pace to a 16 minute mile pace," she said. "It's like I started over from scratch, at least for me, it is because of the regimen of chemo."

She used the treadmill - or the "dreadmill," as she calls it - to train, and looked forward to one simple thing at the AJC Peachtree Race. 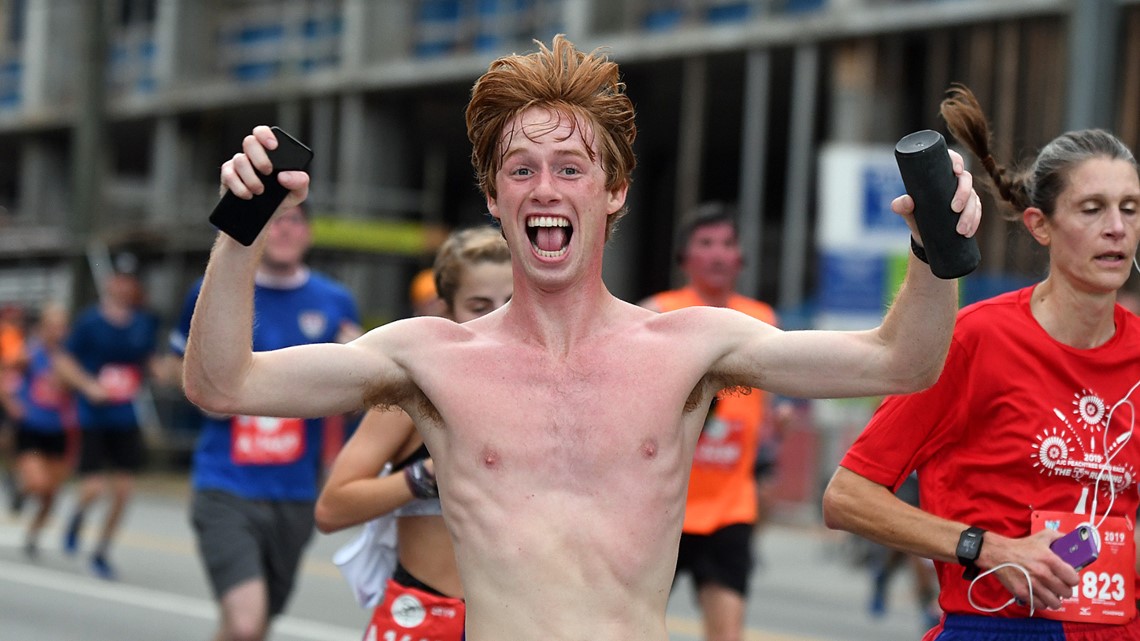 And as the pavement moved underneath her during the race, she remembered her journey through cancer and why she's so grateful to cross another finish line.

"This for me, is really a coming-out party, post-chemo. And probably just to prove to myself that I can do it," Turned said. "You have to have hope and faith. And some determination to say, 'you know what, this is not going to defeat me.'"