Costumes are part of the fun of running the AJC Peachtree Road Race, but the group who linked up with cardboard boxes painted like MARTA stole the show in 2018. 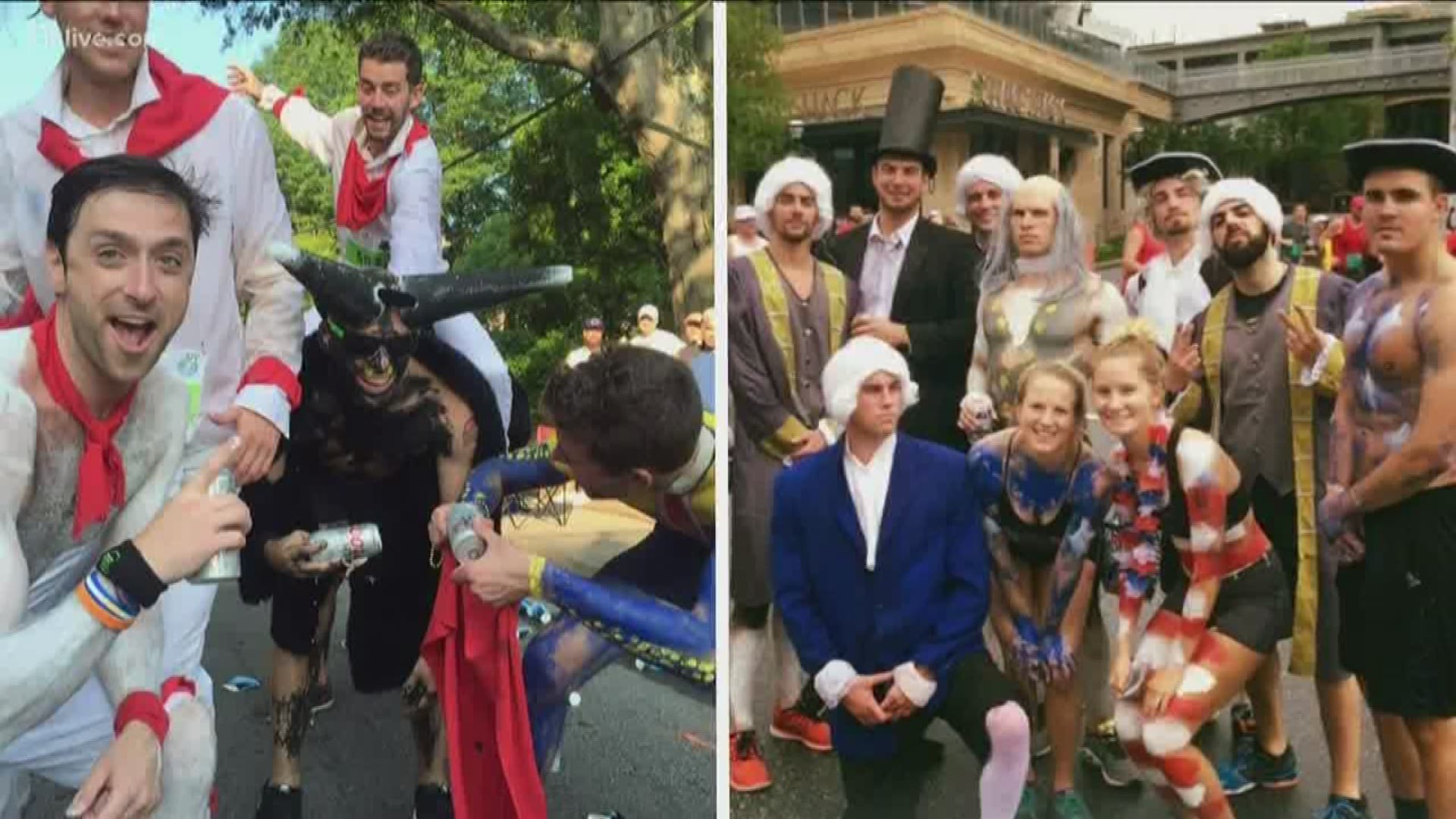 ATLANTA — Part of the fun of running the AJC Peachtree Road Race is dressing up in your best red, white, and blue. A lot of people take it further and wear full-on costumes.

In years past, we’ve seen a woman who dressed up as the I-85 bridge collapse. There’s always an Uncle Sam and a super hero, but the costume that stole the show last year was the MARTA train.

That group of guys has become known for their costumes and how each year gets more outrageous than the last. We sat down with three of the guys: Shawn Matthews, Danny Wiley, and Milton Brannon.

“I think the astronauts was probably my favorite,” Brannon said. “That was a hit!”

“Eagles are at the top for me,” Wiley said.

“I think MARTA got the most laughs,” Matthews said.

The group painted cardboard boxes with the iconic blue, yellow, and orange stripes and linked up all the way down Peachtree Road.

“We had a horn!” Wiley remembered. “You turn your back and you see this snake of a train coming right through.”

How do they decide what they’re going to wear? That’s the million dollar day-of question.

“Literally it’s the night before. We make a decision,” Brannon said.

“There are ideas that are thrown out 364 days a year after, but no one gets serious until about eight hours prior to kickoff of the race. It’s like 10 o’clock, and we’re like ‘Wal-Mart run!’” Wiley said.

Part of their ritual includes staying up all night the night before to make the costume and… um, “hydrate.”

Then, using whatever they can find, they create their masterpiece.

“Lead paint? They still sell it? Perfect. Let’s get it,” Wiley said laughing.

Don’t be fooled by their accessories. These guys are serious runners, and even dressed up, they start at the very front of the race.

“We have to qualify to get up there. That front group is only professionals and elite runners,” Matthews said.

Each of them ran in college. They were on the same team at the University of West Georgia.

“The initial reaction is ‘hey, these guys are funny, but they don’t belong here. Not in the front at least,” Brannon said.

But then, they start running.

A fraction of the 60,000 people who participate in the Peachtree are running seriously. The rest of the people are partying down one of Atlanta’s most iconic streets.

“Yeah, and we get to see them all, because we try to take the lead out, and then we try to be the last to finish,” Matthews said.

“When it started, I think we were like 45 minutes the first year, then started setting new records of like 1 hour 15 minutes. Then it became 2 hours, 3 hours, 3 hours 45 minutes,” Wiley said. “Last year we finished the race and they were picking up the railings behind us. We’re like, OK, we need to pick up the pace next year.”

By the end of the race, they all agree life gets a little “blurry.”

Do they even make it to the fireworks? Turns out that’s the real finish line.

“That’s the goal. Can you make it all the way to the fireworks?” Matthews said.

For this group of friends, the tradition of dressing up and leading the pack has become sacred.

“I’ll never be anywhere else on the 4th of July,” Matthews said.

“Yeah, me too,” Brannon agreed.

Now, we just have to wait to find out what they’ll be this year.