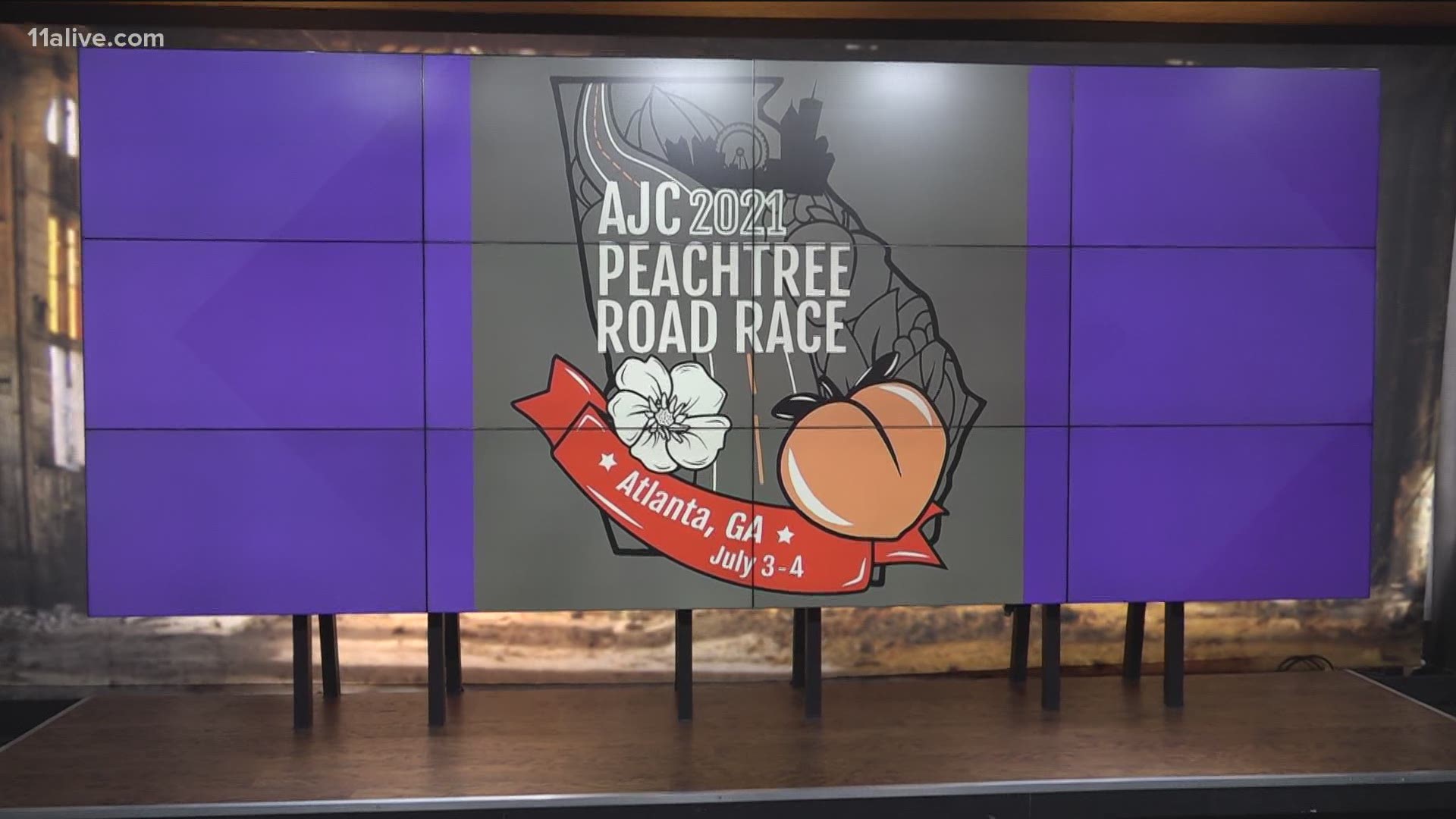 ATLANTA — This year's AJC Peachtree Road Race T-shirt Contest finalists have been revealed, and voting for the winning design is underway now!

On Monday, the Atlanta Track Club shared the top designs from the five local graphic designers vying for the chance to have their creation featured on the coveted AJC Peachtree Road Race T-shirt.

“A lot has changed over the last year. The AJC Peachtree Road Race T-Shirt contest has not,” said Rich Kenah, the Peachtree’s race director. “In fact, this year’s submissions were some of the strongest we have ever received.”

Voting begins March 1 and lasts through March 31, but the winning design won't be announced until race weekend, in keeping with tradition of the 52-year-old event. Besides having their artwork on the shirt worn proudly by all finishers, the winning designer will get $1,000 from the Atlanta Journal-Constitution.

The 10K race will begin at Lenox Square and end at Piedmont Park, as is tradition, however during the pandemic, the race will break with tradition and will be held on July 3 and 4, 2021. The two-day format of the event, organizers said, will allow for social distancing and other mitigation measures designed to keep participants safe.

No participant capacity has been announced, but it is expected to be below the race’s historic capacity of 60,000 people. Other COVID-19 safety precautions such as face coverings, health screenings and limited-contact aid stations will also be enforced.

To vote for your favorite design, go to ajc.com/peachtree. Anyone may vote up to once per day during the voting window. The finalists are below:

Inspiration: My brother, Zach, was the person that inspired me to enter this contest. He believed I had the ability to win it and I wanted to do it for him. My inspiration for this design is my pride in Georgia. I wanted it to be simple but still show the key things that we associate with our state. I wanted to include a road design that went through the whole state outline. Peachtree street and Peachtree road really embody how I perceive Atlanta. The area is filled with diversity, art, history, and community.

Inspiration: This year I wanted to celebrate that the race is back and better than ever. The phoenix has long been a symbol of Atlanta and represents our city’s ability to rise above challenging times with strength and resilience

Inspiration: A fun, retro design that captures the energy of the day. It's a little goofy to run 6 miles with 60,000 folks: the t-shirt should reflect that.

Design Title: Peach for the Stars

Inspiration: Inspiration for my design came from wanting to showcase a peach. I wanted to use the elements of a classic peach, but give the design some fun.

Inspiration: The great community of Atlanta comes out to support those running and walking, cheering on the runners every step of the way. With this design I wanted to use bright colors alongside a more playful kind of illustration that gave the design that same embracing feeling that we share each year in the heart of the great peach state.