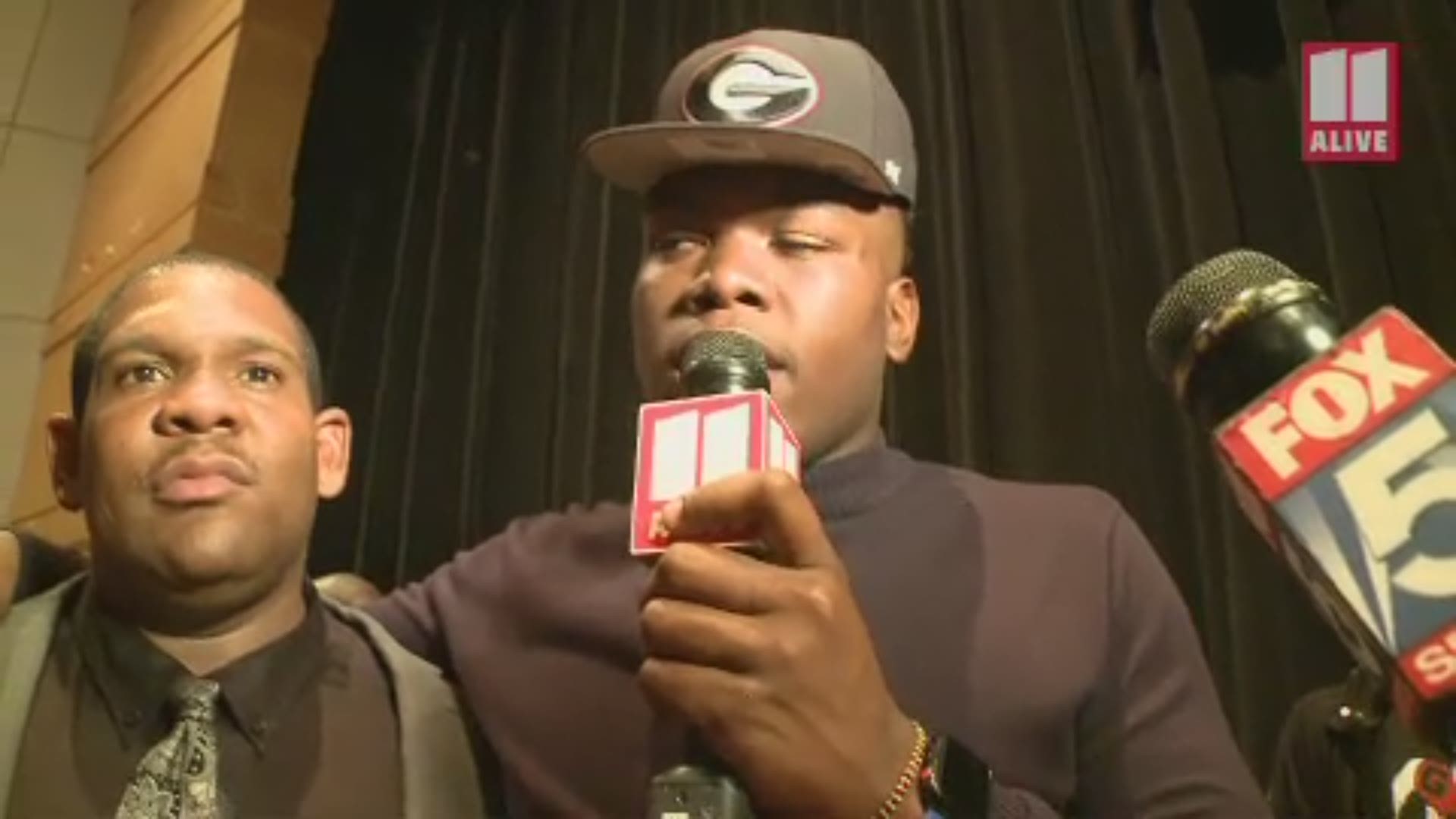 LITHONIA, Ga. — The nation's top offensive tackle simply followed his heart and mind, he said Wednesday, and it kept him home in Georgia.

Broderick Jones announced on National Signing Day his decision to join the Bulldogs. It came after a recruiting saga that took on some uncertainty when the UGA O-line coach who first brought him into the fold, Sam Pittman, left for a head coaching job at Arkansas.

But, as Jones told 11Alive's Maria Martin after the announcement at Lithonia High School, he always knew deep down where he wanted to be.

"Georgia just always, ever since they started recruiting me, they always treated me like family, and that was a big part to my recruitment," he added. "So I just went with my heart and my mind. Georgia was home."

After three UGA offensive linemen declared for the NFL Draft and another transferred, Jones can expect to step right into a major role in Athens.

"I can't even explain how much of a passion that I have for the game," he said of what he'll bring to the Dawgs. "So I just know that I'm gonna be able to go in, work hard, be the best I can be, get the job done."

"It's very exciting. I know as long as I go in, work hard, stay on top of everything, learn the playbook, stay on top of my grades, get in the weightroom and grind, I believe i can do anything," he added.

Jones was a Bulldogs recruit for nearly two years, after committing to UGA back in April 2018. He said he had a great relationship with Pittman, but even though the coach left for another school, when he was on his visit to Athens he "saw what I needed to see, heard what I needed to hear."

"I was always happy for coach Pittman - and his raise, or his head coaching job, I was never sad that he left," he said. "Even though we had a good relationship, I was happy for him because he's being able to better himself and do what he loves to do. So I was never mad at him about it, he couldn't tell me, but it was OK."

He had to stick with UGA, he said, because he believes Kirby Smart and the Bulldogs can send him on to bigger and better things.

"I just look at the years before and how many people they have put in the NFL from my position, just from my position alone, it's so many players that had the opportunity to play in the NFL," he said. "So I believe they can do the same for me."

"It's just the Georgia brand, the name, the face of Georgia," he added. "I'm a Georgia boy, I'm from Georgia, I went to school in Georgia, so i just wanted to stay home."