Atlanta United came from behind to beat América 3-2 to win the Campeones Cup on Wednesday night. 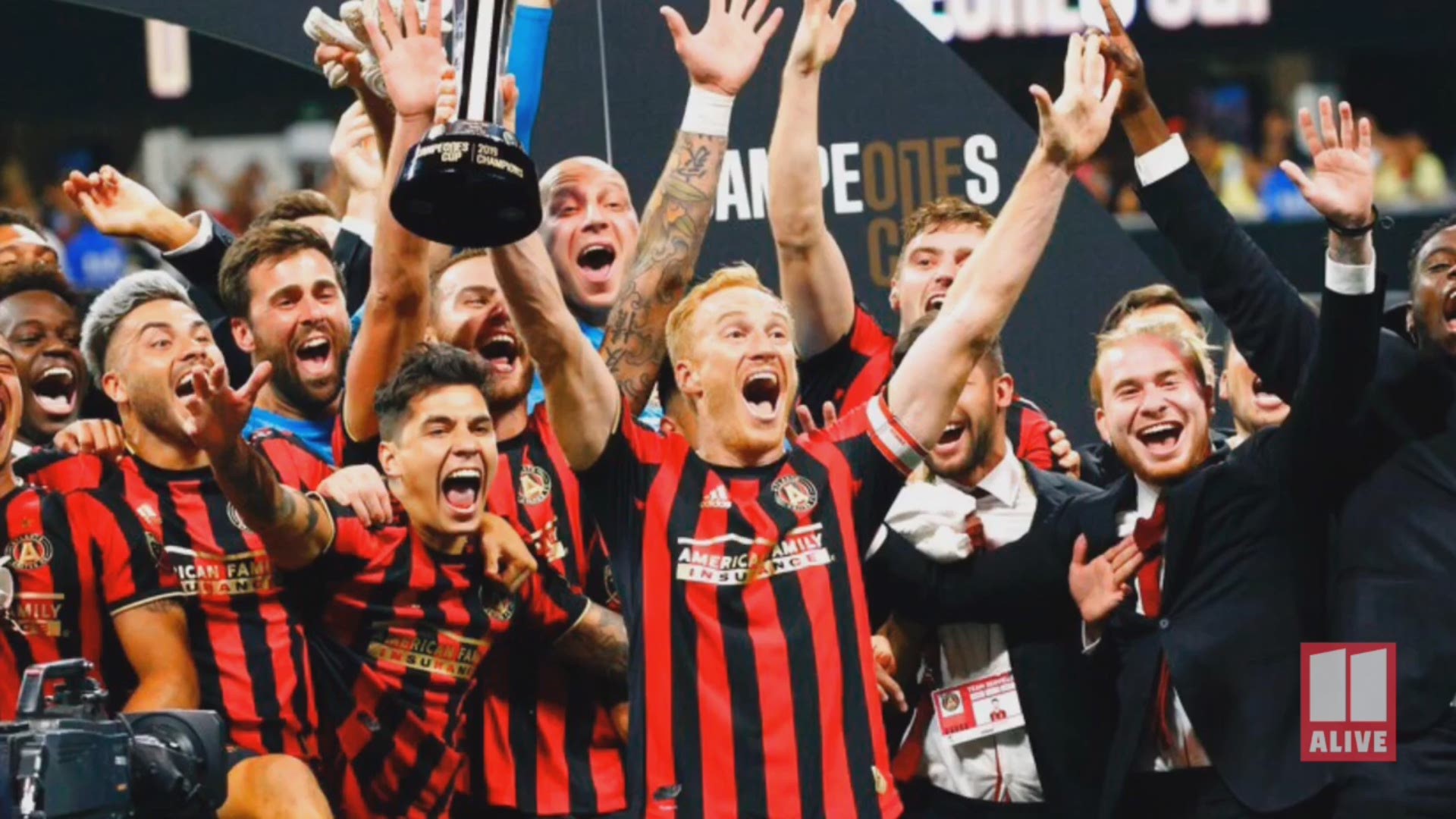 ATLANTA — As confetti flew all around, Atlanta United's players bounced up and down in the middle of the field, celebrating with the same passion they showed last December.

No, it wasn't as significant as winning the MLS Cup.

But in some ways, this felt even more satisfying.

Atlanta scored a victory for all of Major League Soccer by beating one of Mexico's powerhouse teams.

Josef Martinez scored on a penalty kick in the 65th minute after being stopped on his first attempt, and United gave MLS rare bragging rights over Mexico's league, Liga MX, by knocking off Club América 3-2 for the Campeones Cup on Wednesday night.

"These are the two champions against each other," Atlanta United coach Frank de Boer said. "It's good to see we're getting closer."

The matchup between the reigning MLS Cup champion and the Liga MX team that won the Campeón de Campeones last month was an entertaining, back-and-forth affair before 40,128 fans at Mercedes-Benz Stadium, split nearly evenly between red-clad United fans and yellow-wearing América supporters.

Atlanta United grabbed an early lead, América surged ahead early in the second half, but the home team pulled off a comeback of its own to add another trophy to its case.

"They're obviously a great team," said Emerson Hyndman, who gave Atlanta a lead just 5 minutes into the game. "We knew it was going to be a tough match. But I think the way we competed tonight showed we can compete with teams in Mexico. It was a great team performance. It showed how far we've come"

But Atlanta came out on top against an América team that sent out all but one starter from the lineup used for its most recent Liga MX game. With an important MLS match coming up at Portland, United showed its depth by going with five new starters, including backup goalkeeper Alec Kann, who gave Brad Guzan the night off and made a huge save in the opening minutes off a header.

"He looked very confident in goal," de Boer said about Kann. "I'm very proud of him."

Martinez was stymied by goalkeeper Oscar Jiménez on a penalty late in the first half that was awarded after a VAR review. America went ahead for the first time at 2-1 on Roger Martinez's goal off a corner in the 57th, but United tied the game just 2 minutes later on Jeff Larenowitz's laser strike from about 30 yards out that appeared to deflect off an América defender in front of the net, leaving a flat-footed Jiménez with no chance.

Not long after, United notched the winner. It was set up by a sloppy tackle from Guido Rodriguez, who slid into Florentin Pogba — the defender wasn't even facing the goal — for a takedown just inside the area. Referee Joel Aguilar quickly pointed to the spot, where Josef Martinez blasted a shot past the keeper into the top left corner.

Martinez, the reigning MLS MVP and in the midst of a record streak of 10 straight league games with a goal, tried to get cute with his first penalty attempt. He approached the ball with a soaring stutter-step before hitting a softer shot that Jiménez batted away with a diving save.

In the end, that miscue was forgotten.

América finished with only 10 players after Bruno Valdés was sent off in the 72nd for shoving down Martinez as he was sprinting toward the Mexican team's goal.

"Obviously, I'm very angry," América coach Miguel Herrera said through an interpreter. "We gave them too many opportunities. We didn't play to the best of our abilities."

When the whistle sounded, the United players celebrated furiously in the middle of the field, thrilled to claim the second trophy in their three-year existence. They'll have a chance at another prize in less than two weeks when they host Minnesota United in the final of the U.S. Open Cup.

"That's what we play for," Hyndman said with a smile. "Winning trophies."

Hyndman scored the opening goal off a quick flick from Dion Pereira, setting up a low, left-footed that skidded just beyond the reach of a diving Jimenez.

Kann caught a huge break when a pass all the way through the area to Renato Ibarra streaking down the far side resulted in a shot that slammed off the crossbar.

But Ibarra got another chance in the 15th and made it count. Roger Martinez slipped around defender Franco Escobar right next to the goal and guided a soft pass to Ibarra, who banged it off the underside of the crossbar.

In the end, Atlanta United was the team that celebrated.

They were joined by all of MLS.

"For the team, it's huge. And the league," Kann said. "That is one of the best teams in North America. It's huge for us to bring it home. We deserved to win."