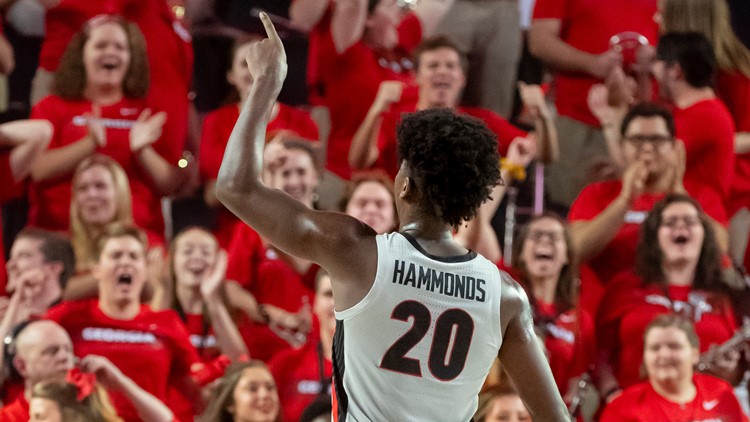 MEMPHIS, Tenn. — Georgia men's basketball is coming home with a win and important milestones after breaking away in the second half for a 65-62 win in Memphis.

Georgia's victory over the Memphis Tigers (12-2) marks its first time taking out a Top 10 team since 2011. It's also their first road victory against a top-ranking team since 2004

Leading the way in points (15) and rebounds (12) in his 35 minutes in the game was Rayshaun Hammonds who also had two assists.

Anthony Edwards, Donnell with 13 points, Donnell Gresham Jr. with 12 and Sahvir Wheeler with 10 rounded out the top four scorers for the game. Wheeler also led the Bulldogs in assists.

“They earned this win,” Georgia head coach Tom Crean said. “They really did, because it wasn’t easy."

The first and second half final scores tell the tale of a game that remained close throughout.  The Bulldogs managed a 10-5 lead nearly four minutes into the matchup but the Tigers managed to snatch that away only halfway to the half-time buzzer. Gresham managed back-to-back 3-pointers to put the Bulldogs ahead 15-13.

With 11:35 left in the half, the teams would trade leads 12 times before tying the game up at 37 points. It was only in the second half that the Bulldogs managed to widen the lead by three points.

But that didn't happen without a major defensive performance by the Bulldogs who, in the last 20 minutes, forced shot-clock violations against the Tigers. They capitalized on one with a three-point basket from Gresham which once again tied the game at 54. The leads would change 20 times and tie 10 times in the game.

But the Bulldog defense held off any successful field goal attempts in the last four-and-a-half minutes of the game.

The Tigers got more attempts at the free-throw line but only managed a success rate of a little over half of its 20 attempts. The Bulldogs not only had a 63 percent success rate on free-throws, but they also sealed their win with one by Gresham.

"We did not get a lot of trips to the foul line. We were in a situation where we just had to figure out ways to come back and get it done in the game…," Crean said.

The Tigers managed to outstrip the Bulldogs in 44 total rebounds in the game and also managed more blocks and steals. Both teams ended up with 16 turnovers in the bout.

"They are very deserving of their ranking," Crean said. "This is a huge road victory for us, and it was a team effort.”

The win improves the Bulldogs record to 10-3 as they head back to Athens to take on 17th-ranked Kentucky on Tuesday as they open up SEC play. The game will be at 9 p.m. at Stegeman Coliseum and be aired by ESPN.