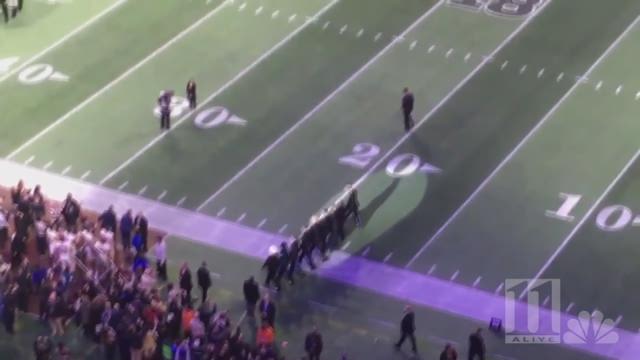 ATLANTA — President Trump arrived at the national championship game as expected Monday night, walking on the field to a mix of cheers and boos about seven minutes before kickoff, and standing with military members for the national anthem. Trump was mostly cheered when he walked out of the tunnel but at the conclusion of the anthem was loudly booed.

Officials shut down Mercedes-Benz Stadium about 5:45 p.m. EST when Trump was on his way, leaving thousands of fans (and some media members) stranded in the rain until the president was inside the stadium. When he arrived almost an hour later — presumably passing a small group of protesters outside CNN headquarters — there were resounding boos.

LINK: Live updates from the game

Players were not on the field during the anthem.

Former Georgia All-American Hershel Walker, the 1982 Heisman winner and an honorary Bulldog captain for the title game, told Fox News earlier Monday, “I'm glad he's at the game, because he loves football. It's sad what's happened with all the kneeling and standing and all that, because Donald Trump is a great man, he's a great president and I wish people could understand that."

Walker and Trump have been longtime friends.