From decades of consistency to over a decade of inconsistency, we look back at the history of Tennessee football's head man. 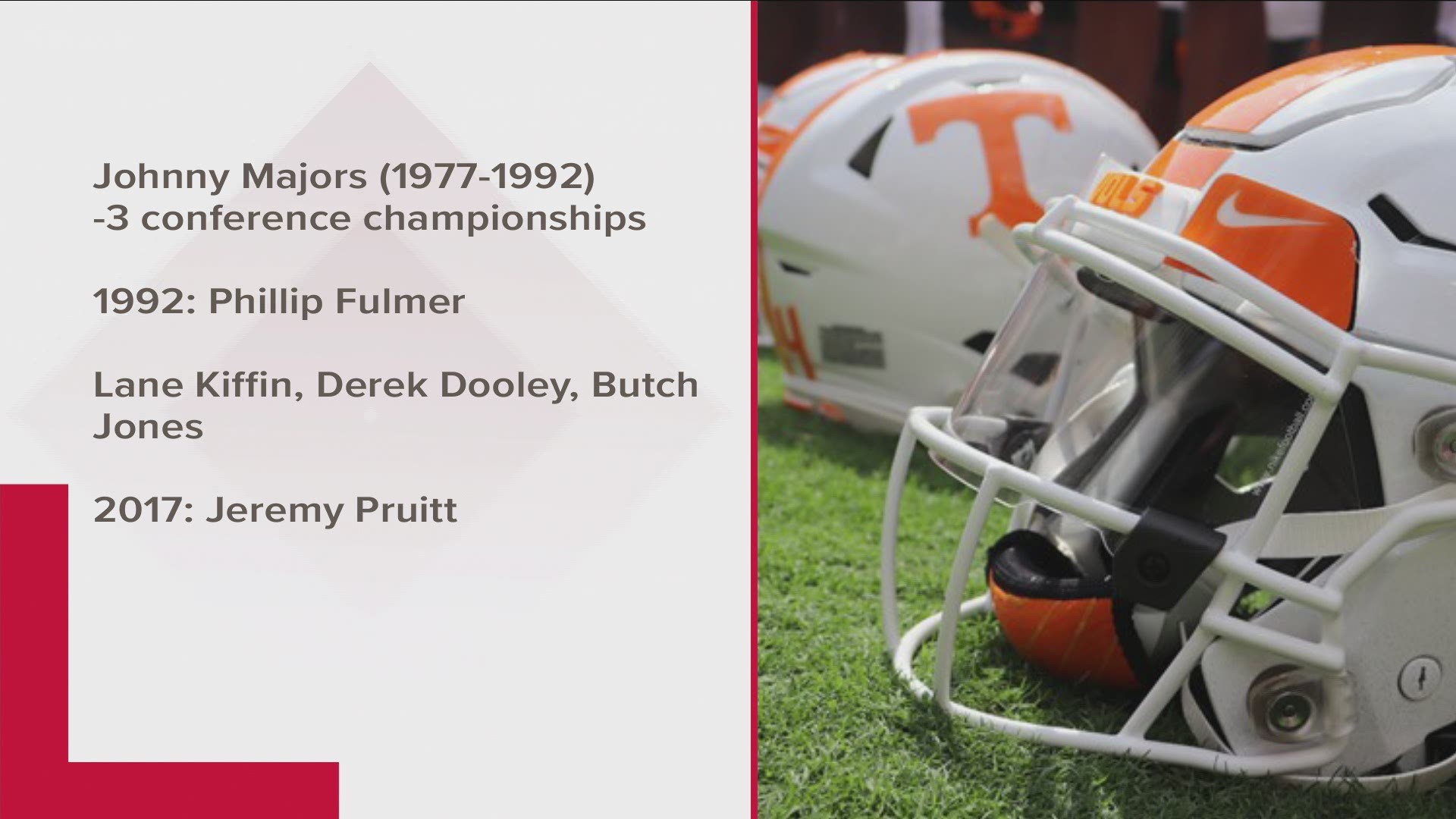 For more than three decades, Tennessee football was the model of consistency at head coach. But the team is now on its fifth coaching search in 12 years.

Looking back at the history of Tennessee's head man, let's start with the late Johnny Majors.

Majors won a national championship with the Pittsburgh Panthers in 1976. It just so happened that his alma mater, UT, was looking for a coach.

Majors and winning returned to Rocky Top, but UT wouldn’t return to the top for another 8 years.

"I hope that our football team gives a little something extra, cause it sure would be nice to beat Alabama," Majors said.

Tennessee won three conference championships under Majors, finishing ranked as high as 4th in the AP and locking up bowl wins over Miami, Arkansas and Virginia.

But in the early 90s, at the peak of his coaching success at UT, his health began to fail.

"I feel darn good, so I’m not gonna change my way of life… except I’m gonna be a coachable patient," Majors said.

Heart surgery at the beginning of fall camp meant the Vols needed an interim - a man by the name of Phillip Fulmer.

"I knew it last night that he was going to have the surgery," Fulmer said. "Nobody knew to the degree. Since that, we’ve been preparing for the scrimmage and trying to keep our minds on our business."

A 3-0 start is great for business. When Majors returned, contract negotiations went sour, and the Vols pulled the trigger on the young gun.

On December 31, 1992, Majors relinquished all duties connected with the University of Tennessee.

"We’re taking it very seriously and our players have practiced with that in mind," Fulmer said.

Fulmer racked up 152 wins, second only to General Neyland himself. With the help of some great quarterbacks. Fulmer took Tennessee to a place it hadn’t been since the times of Neyland and Dickey: a national championship. 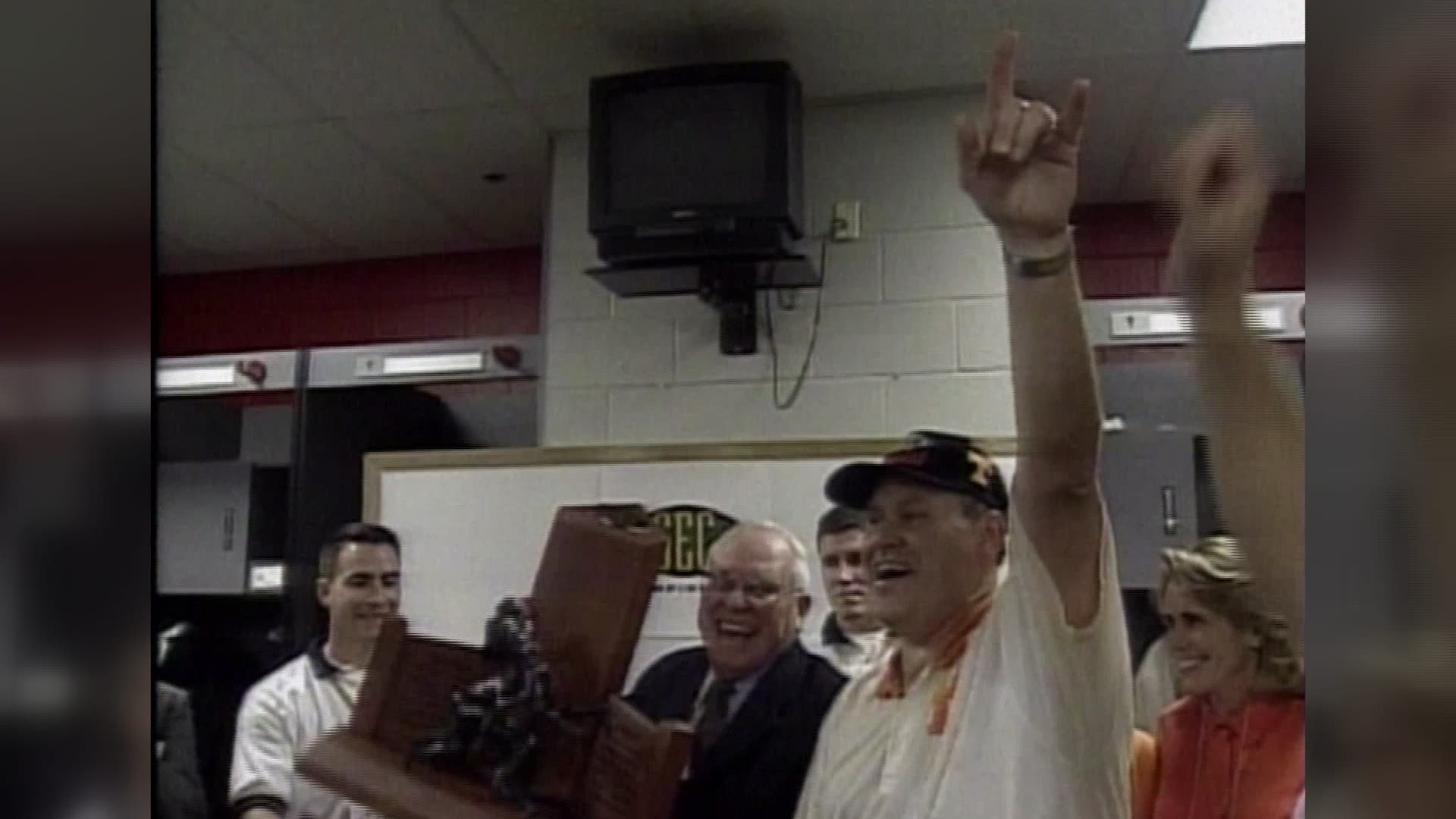 LOOKING BACK: Clad in Big Orange: The story of the Vols' '98 Championship

But all good things must come to an end. After missing a bowl game for the first time in 25 years and putting up a few five-win seasons, Phillip Fulmer was alerted of his dismissal on November 2, 2008. He coached his final game in Neyland four weeks later, a 28-10 win over Kentucky.

For 31 years, Tennessee had two coaches. They put up a combined 268 wins. 5 SEC championships and one national title. So what came next? Chaos starting with Lane Kiffin.

Kiffin showed sparks with a near upset over number one Alabama in Tuscaloosa. Just when you thought UT had found the main man for years to come, he left on January 12, 2010.

"His decision affects people. This isn’t just him and his coaching career. This is a whole state, a whole fanbase, and a whole football program," a fan said.

"We’re leaving here 14 months later a lot better team than we were 14 months ago. I appreciate you guys coming, and thanks for all your support," Kiffin said.

"I wish I could give you one line that’s going to convince 100% of the fans, and that’s never going to happen," Dooley said.

His tenure was short-lived. Three years, three losing records, and the Vols were onto the next one - Butch Jones.

Jones posted a 34-27 record in his four-plus seasons at Tennessee, including a 14-24 mark in Southeastern Conference play. He finished with the 14th best winning percentage in Tennessee history.

We all know how that went.

After being the model of consistency for the last quarter of the 20th century… Tennessee is on its fifth coaching search in the past 12 years. The team hasn't had any SEC championship wins since 1998 and 0 wins against Alabama since 2006.

What’s next for the Vols in 2020 and beyond? Will it be a return to college football glory? Or another coaching carousel that spins round and around. Never escaping mediocrity.