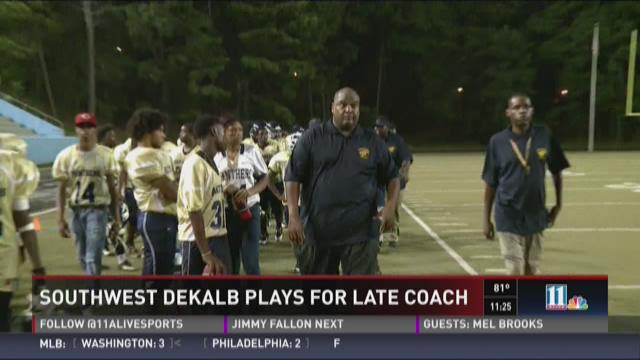 The husband, father of three, former Florida State University All-American and head football coach at Southwest DeKalb High School was one to always practice what he preached.

The younger Tanks played for his dad on the Panthers' football team.

For 48 years, the coach and father lived by those words until the challenge he faced in early August proved to be far greater than anyone could have imagined.

"We were actually about to head up to the school for practice, and things weren't good for him. He asked me to take him to the hospital," his son said. "As they ran tests, they found out he did have a stroke. The stroke caused a blood clot."

The clot reached areas of the brain that are impossible to operate on. Surgery was not an option.

"He ended up passing away from a blood clot," his son said.

Tanks Sr. died 16 days before the Panthers' season opener. He was about to embark on his fourth season at Southwest DeKalb. He was 12-18 in his three seasons there and 40-60 all-time in 10 seasons of coaching.

Retired coach Fletcher Salter was named the interim head coach through January at a time when everyone was stunned at the loss of their coach. Salter and the team quickly found inspiration in their late coach.

"He took us to camp," Salter recalled. "And at that camp, he had a breakout session where he came out and talked about that people win because they have a why ... Why [the Panthers] play football is because of Coach Tanks."

The team embodies its "Why" in a two-word motto that they say to break huddles: Tanks Strong.

The Panthers are 2-0 to start the season - their best start since 2007. Last Friday, they beat rival Cedar Grove for the first time since that same season.

"The team kind of came together," quarterback Justin Tomlin said. "Let's stay together as a team to win."

"Coach Tanks was watching over us during the game," Tomlin added. "God had a plan for us to win."

The Panthers did not just lose their coach. They lost a mentor, someone who always had their best interest in mind.

"One of his main goals was getting us into school," Tanks Jr. said. "He took time to pull transcripts and go and talk to teachers and see how guys could improve grades."

But for Tanks Jr., he didn't just lose a coach or mentor like the rest of his teammates. He lost his dad.

"My mom always told me that my dad has prepared me for something, but she didn't really know what it was. And now I think this has shown me what my dad has been preparing me for since I was very young."

He was preparing Tanks Jr. to live out the family legacy.

A legacy etched in the hearts and minds of those left behind for many years to come.