Atlanta will find out where it picks in the 2019 NBA draft on Tuesday night. 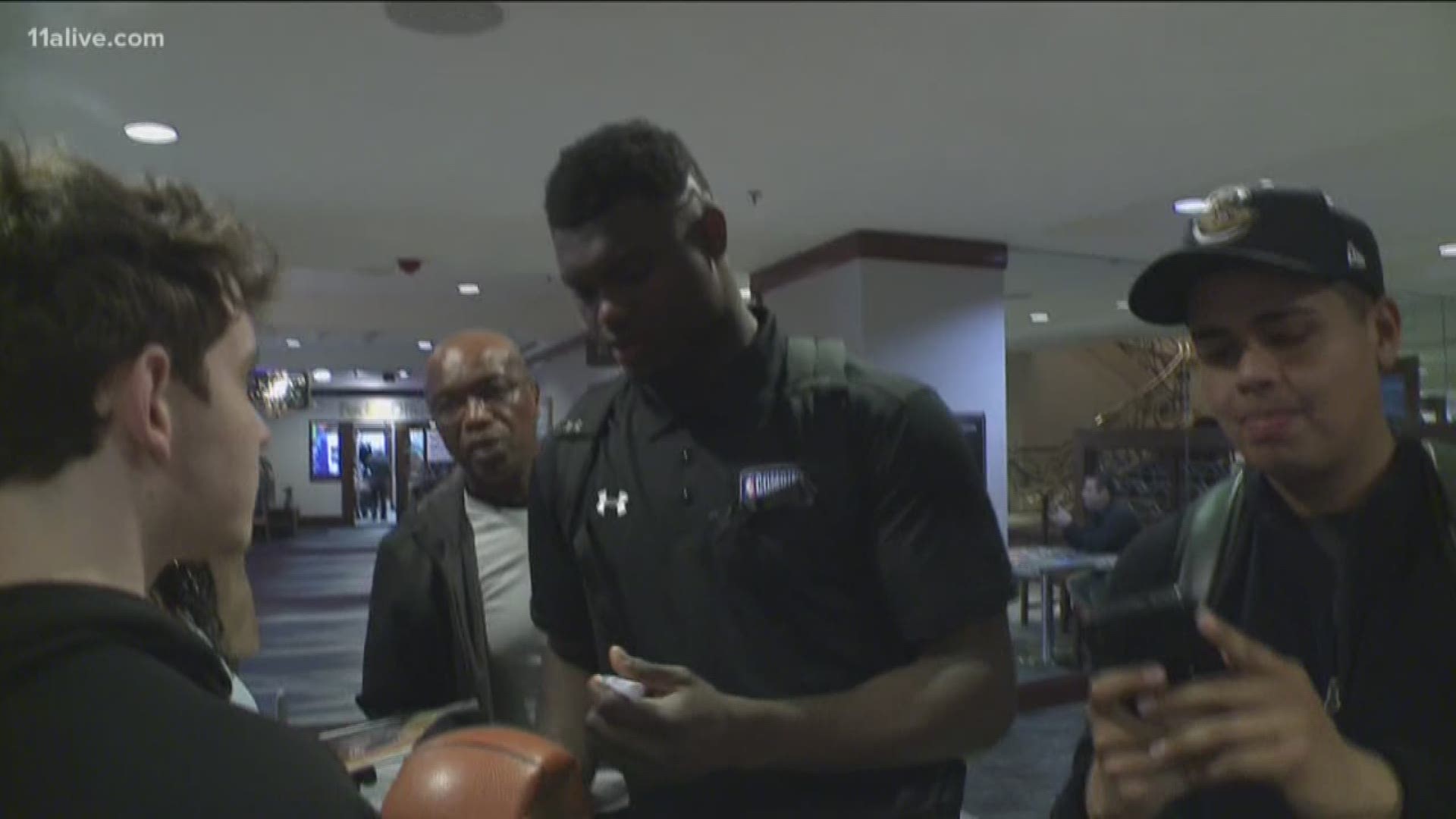 ATLANTA — One of three things will happen to the Hawks in Tuesday night’s NBA draft lottery: They’ll stay where they are, they’ll move up or down a little, or they’ll get Zion.

It’s that last option that has fans hanging Hawks championship banners in their heads.

"Zion" is Zion Williamson, the Duke star who offers the chance for one lucky team tonight to change their trajectory in a profound way. Perhaps not since LeBron James 16 years ago has a player generated this much anticipation at the top of the draft.

Blessed with size, skill, power - and boasting an incredible feel and intelligence for the game - Zion will undoubtedly go first in the June 20 draft and is widely seen as a generational talent who could instantly lift a team into the league’s upper tier.

Atlanta is seen by experts as one of the best possible destinations for Williamson, where he would fit into a group of young talent that already includes emerging stars like John Collins and Trae Young.

WATCH: This Trae Young buzzer-beater might be the Hawks' best highlight of the year

“We would be on ‘SportsCenter’ every day if he came here,” Young told The Athletic. "It would be no joke here. We’d have John on one side and Zion on the other. This would be the new Lob City. It would be crazy.”

Here’s how it could go down tonight:

How to watch the 2019 NBA Draft Lottery

How does the NBA lottery work?

Lottery balls are pulled to arrange the first four picks in the draft. Generally speaking, the worse you were in the regular season, the more lottery balls you get.

After the top four, teams slide into place based on regular season record.

Each of the worst three teams – the New York Knicks, Cleveland Cavaliers and Phoenix Suns – will have a 14 percent chance at the top pick. The Chicago Bulls, as the next-worst team, have a 12.5 percent chance.

The Hawks, who went 29-53 during the season, fall in place after that as the fifth-worst team.

To get the pick #1: The Hawks have a 10.5 percent chance at the top selection.

If they get it: They will take Zion. Hawks fans may very well throw a parade.

If they get it: The crop of the next best players in the draft includes a point guard, Ja Morant, whom it’s not thought Atlanta would heavily be interested in, given that they already have Young. They could look at standout wings like Zion’s Duke teammate R.J. Barrett or DeAndre Hunter, who starred on Virginia’s national championship team.

To stay where they are at #5: The lottery system is new, and the reasons for this are complicated, but the short of it is Atlanta will probably not stay at #5, with just a 2.2 percent chance of not moving either up or down according to the team’s tweet.

If they get one of these: Players like Gonzaga’s Rui Hachimura, Texas Tech’s Jarrett Culver and Duke’s Cam Reddish could be available lower in the lottery, should the Hawks wind up there. Make no mistake, though, it will be a massive disappointment to fans if it comes to this.

Also worth noting: The Hawks could also wind up with a second pick from the lottery, a pick promised to them from the Dallas Mavericks from a trade made last year. The pick is protected if the Mavericks win the lottery and move up, so Atlanta only gets it if is the #9 pick or worse.