LeBron James: 5 takeaways from The King taking his talents to the Lakers

11Alive Sports spins things forward from Sunday's bombshell of LeBron James agreeing to a $154 million deal with the Lakers, thus ending his second go-round in Cleveland. 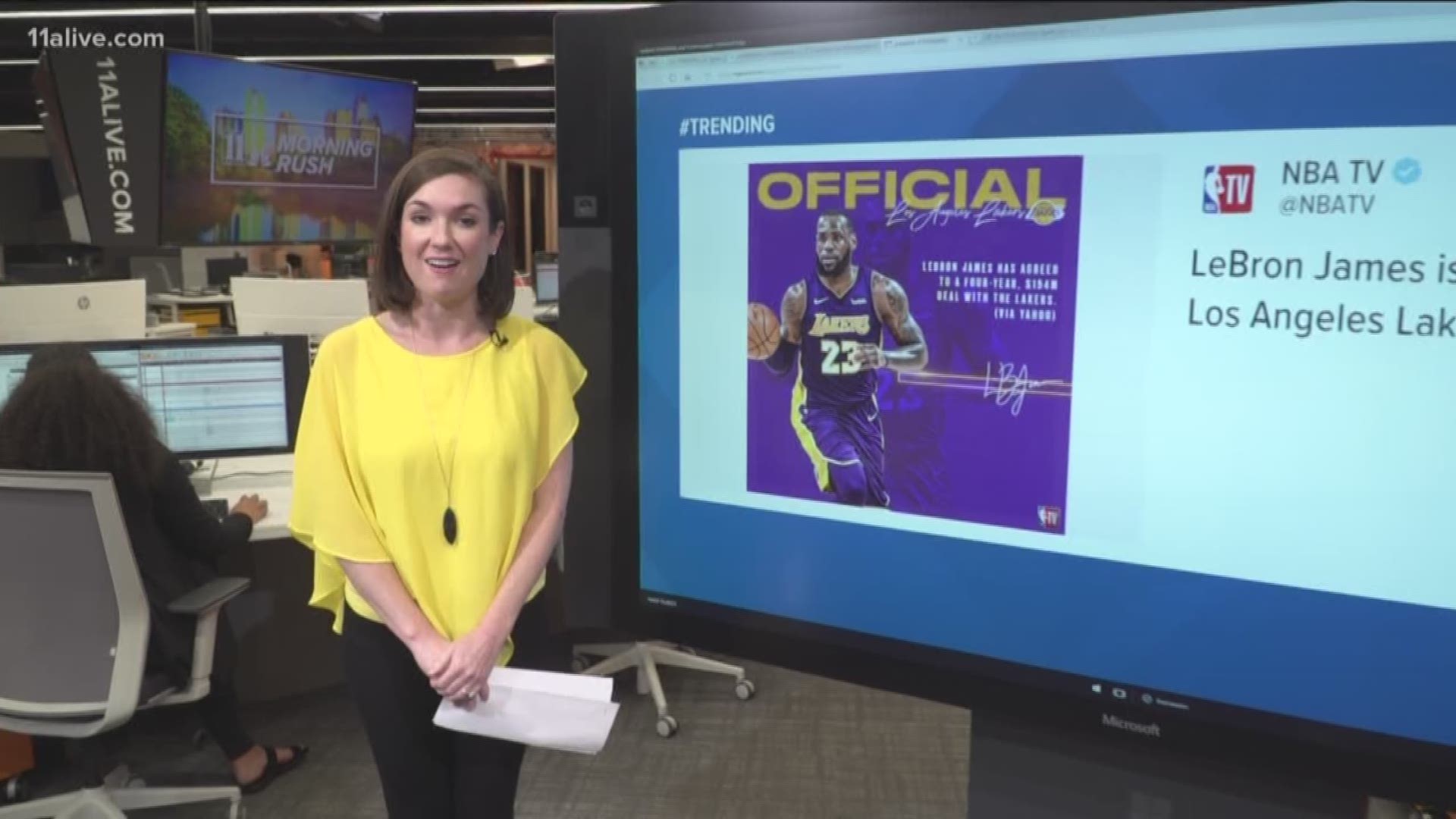 It was easily the biggest bombshell of a hectic sports day. Unfortunately, this could also lead to some post-LeBron-news depression in the sports world down the road.

Luckily, it's a holiday week. Perhaps you'll be too busy grilling outside, consuming drinks by the pool and/or watching 11Alive's coverage of the AJC Peachtree Road Race to ponder how the Cavaliers can improve their roster, sans James ... or how J.R. Smith will spend the open months of May and June next spring—since Cleveland has zero chance at repeating as Eastern Conference champions.

1. LeBron could miss the Western Conference playoffs the next three years, and it wouldn't hurt his legacy in any way

Here's an advance warning, folks: When tuning into sports-talk radio or intentionally argumentative TV today, get ready for a bunch of pointless legacy talk, regarding LeBron joining the not-ready-for-prime-time Lakers.

Why is it pointless? At age 33, James has seen and done it all in the NBA.

**Two-time winner of 'Associated Press Athlete of the Year'

And from a stats perspective, LeBron ranks ...

So, please, spare me the 'legacy' discussion, just because LeBron feels like dipping his toe into the Western Conference waters for Year 16.

At worst, he's the fourth greatest player in NBA history, along with Michael Jordan, Wilt Chamberlain and Kareem Abdul-Jabaar. That's Mount Rushmore territory ... if the NBA someday commissioned a construction crew to carve the four stars' likeness into a mountainous region of South Dakota.

LeBron thanks Northeast Ohio on his Instagram story pic.twitter.com/AFlgrp5HXa

Besides, if James' Lakers should upend the Warriors during the West playoffs sometime over the next three years and subsequently capture an NBA championship, wouldn't that accomplishment be on-par with slaying the Golden State dragon in 2016?

On second thought, it would be heralded as the ultimate achievement, since that incarnation of the dynastic Warriors didn't have Kevin Durant.

2. With Cavaliers fans, there can be no bitterness about LeBron's move out West

Why is that? It's quite simple, really.

In their heart of hearts, the good people of Ohio had to know James wouldn't feel obligated to stay with the franchise for another four or five years—especially after delivering the NBA title in 2016.

Until then, the city of Cleveland hadn't experienced a major-sports championship since 1948 (MLB's Indians).

That's quite a long time to be broken-hearted. Roughly seven decades.

Heck, there was even a 30 For 30 documentary devoted to the pain and suffering Cleveland fans had endured through the years. We're talking two or maybe three generations of northeast Ohioans being super-desperate for a championship.

But alas, none of that matters today. This should be a peaceful breakup for all parties.

So, James no longer plays for the Cavs, fine.

He's still the greatest athlete to grace the Ohio borders since Jesse Owens or Jim Brown.

And if recent history tells us anything about the LeBron saga ... the Cavaliers should be Vegas favorites for James' next free-agent destination in 2022.

2a. The Lakers have a better supporting cast than people think

For now, let's assume the Lakers have zero interest in ravaging their entire roster (minus LeBron and Kentavious Caldwell-Pope) to acquire Kawhi Leonard, via trade.

If this remains the case, then get used to seeing Lonzo Ball, Brandon Ingram, Kyle Kuzma, rookie Moritz Wagner and some random cat named Ivica Zubac on national TV every night.

And frankly, it's not a bad thing.

If the Spurs genuinely want to engage the Lakers with blockbuster-trade talks, getting back Kuzma, Ingram, Wagner and one or two first-round picks would amount to a serious return.

Perhaps better than anything the asset-rich Celtics could muster, short of shipping Jayson Tatum to San Antonio.

3. Raptors fans rejoice, for LeBron will never again darken your doorstep during the postseason

I'll let this Twitter meme (below) say everything about the above declaration.

Raptors right now knowing they no longer have to go through LeBron James to get to the NBA Finals 😂 pic.twitter.com/DswEdk70Tc

The Raptors have averaged 55.3 wins over the last three seasons; and yet, their playoff dreams were crushed by the Cavaliers each time during this span—including the recent humiliating sweep from late May.

Well, go ahead and celebrate Toronto ... for this is a new day of optimism.

And as a bonus, you likely won't have to worry about LeBron James Jr. knocking off the Raptors during the playoffs for another decade.

4. LaVar Ball's reality-TV show just got more interesting—assuming LeBron approves of his likeness on the program

Quick question: Does Ball even have a show with Facebook anymore?

When son Lonzo was drafted last year, there was a three-week period of perpetual Ball In The Family TV promotions, as if the senior Ball had suddenly morphed into the Most Interesting Man In Sports.

But after that, the commercials started drying up—even after LiAngelo Ball had a high-profile run-in with the Chinese government last November (serious theft allegations), when UCLA and Georgia Tech traveled a great distance to meet on the college hardwood.

(If memory serves, the President of the United States had some influence with LiAngelo and two other UCLA teammates escaping the international incident with a proverbial slap on the wrist ... although LaVar Ball's Twitter page—below—offers a different perspective.)

Fast forward to the present: With LeBron now part of the whole L.A. scene, I'm sure the respective production companies for James and Ball can concoct with a mutually beneficial arrangement, where both sides come out smelling like a rose.

Speaking of which, according to IMDB.com, LeBron already has 15 'producer' credits to his name, covering projects like The LeBrons (animated series), Becoming Bobby Feeno (TV documentary), The Wall (NBC game show) and the upcoming Space Jam 2, for which LeBron will also play a starring role.

Not bad for a guy who didn't live in Hollywood full time.

The above comment doesn't come with a whiff of sarcasm.

If Trae Young is truly destined to become the Eastern Conference version of Stephen Curry (the opinions inside the 11Alive newsroom vary), and Atlanta general manager Travis Schlenk can spin gold from next year's bounty of three first-round selections, then the Hawks should be easy playoff contenders within three years.

And before you start dismissing Atlanta's chances of being highly relevant in NBA circles down the road, just hearken back to how the Golden State Warriors were perceived just six years ago.

LeBon: Can't lose in the NBA finals if I dont make it. pic.twitter.com/ZxA7mOI8TS

In 2012, not long before the Warriors would become a dynasty (three NBA championships, four West titles from 2015-18), Golden State fans were less-than-overjoyed about Curry re-signing with the club (four years, $44 million), the result of a now-unfair tag of being injury-prone.

Obviously, this was before Curry had achieved icon status.

Plus, immediately after the 2012 draft, the Warriors' first-round pick (Harrison Barnes) was getting far more attention than the second-round choice (Draymond Green).

So, a lot can change in the span of three years, especially if Hawks rookie Omari Spellman ends up becoming the East Coast version of D-Green.