There will be no fan activities, ticketed events or hospitality functions as part of All-Star, the NBA said. 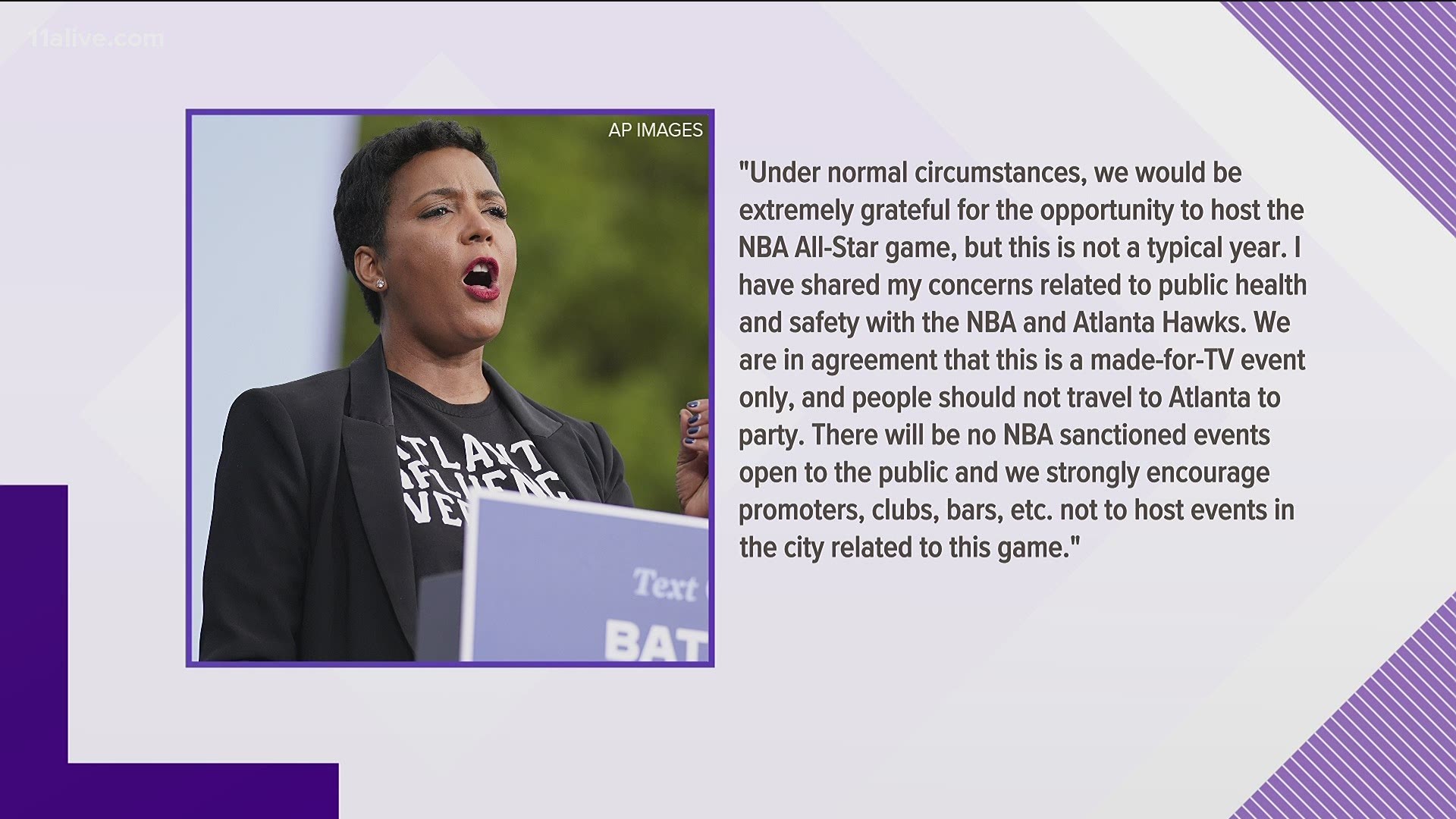 ATLANTA — The NBA has finally made the official announcement that NBA All-Star 2021 will be held at Atlanta's State Farm Arena next month.

For the first time, the league’s annual event of the game will take place on one night, on March 7 at 6:30 p.m.

Talks have been stirring for weeks that the All-Star Game would take place in Atlanta, even with the push back and concerns from some players due to the COVID-19 pandemic.

Atlanta Mayor Keisha Lance Bottoms chimed in on the conversation this week by issuing a statement saying under normal circumstances, the city would be grateful to host the event, but she said "this is not a typical year."  The mayor said she shared her concerns with the Atlanta Hawks and the NBA.

"We are in agreement that this is a made-for-TV event only, and people should not travel to Atlanta to party. There will be no NBA sanctioned events open to the public and we strongly encourage promoters, clubs, bars, etc. not to host events in the city related to this game," Bottoms' statement said.

The NBA said COVID protocols are in place, which include private travel to and from Atlanta, the creation of a “mini bubble” environment within a single hotel for players and coaches, and enhanced COVID-19 testing. There will be no fan activities, ticketed events, or hospitality functions as part of All-Star, the league said.

The event will include the Taco Bell Skills Challenge,  The Mountain Dew 3-Point Contest, and the 70th NBA All-Star Game will begin at 8 p.m.

The AT&T Slam Dunk will be featured during halftime.

The league said the game will follow the same format as last year, with the teams competing to win each quarter and playing to a Final Target Score during the untimed fourth quarter.

NBA All-Star starters are expected to be announced at 7 p.m. Thursday.

As part of this year’s events, the NBA and National Basketball Players Association announced they will commit more than $2.5 million in funds and resources toward Historically Black Colleges and Universities and support and awareness around equity and access to COVID-19 care, relief and vaccines.

"The Clark Atlanta University community is incredibly excited to be a part of NBA All-Star 2021. The night will provide a unique opportunity not only to celebrate the accomplishments of our students, faculty and alumni, but also to share the rich history and essential contributions of our institution and other HBCUs with a global audience," Clark Atlanta University President, Dr. George T. French, Jr. said in the news release.

All-Star will also feature special performances by HBCU musical groups and unique storytelling and content by alumni and students.

"Morris Brown College would like to thank the NBA, NBPA and the entire extended NBA family for including us in this year’s All-Star Game," Morris Brown College President, Dr. Kevin James said. 'We welcome and appreciate the attention the night will bring to the unique and vital role played by historically Black institutions here in Atlanta and across the country.”

The presidents of Spelman and Morehouse exuded similar sentiments in their statements in the news release.