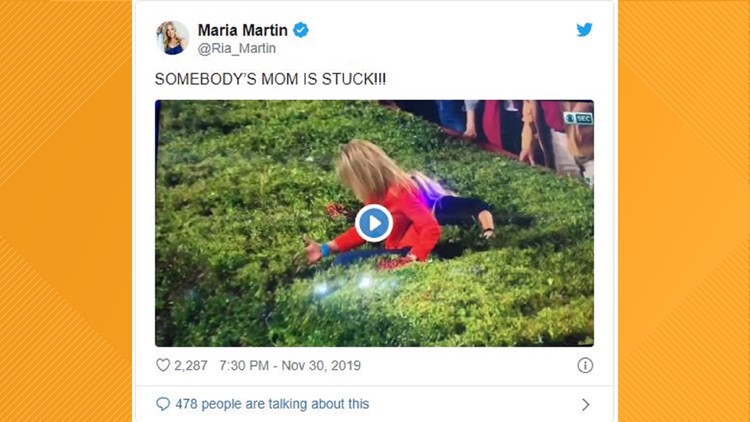 AUBURN, Ala. — Most folks knew the Iron Bowl matchup between Auburn and Alabama was going to be one of the biggest rivalry games of college football on Saturday.

What no one could have expected was how a spontaneous moment in the aftermath of the game would take the internet by storm.

Numerous videos online now tell the tale: an upset defeat of fifth-ranked Alabama by their in-state rival, fifteenth-ranked Auburn, was a moment to celebrate as hundreds upon hundreds of Auburn fans stormed the field to do just that.

But as two women attempted to run in and revel in the victory, their trek turned into a bit of a... swim?  The video shows one fan essentially paddling her way through several feet of hedges after her momentum ran out around midway.

Eventually, they both made it through - probably - and got to enjoy what everyone from Auburn had hoped to see. But to the internet, there were two stories of victory on this day - one of man versus man on the field and another of woman versus nature on the sidelines.

Maybe going over or around the monster hedge will be a better option next time.

According to the Associated Press, the 48-45 victory by the Tigers will mean they wait a potentially better bowl destination than expected. The Crimson Tide will also be on the lookout for a bowl invitation but has not shot at the title this year.