Justin Fields, who supposedly felt there was no plan for him at UGA, now has chance to silence critics

Beating Alabama would silence them once and for all... until he's in the NFL, of course. 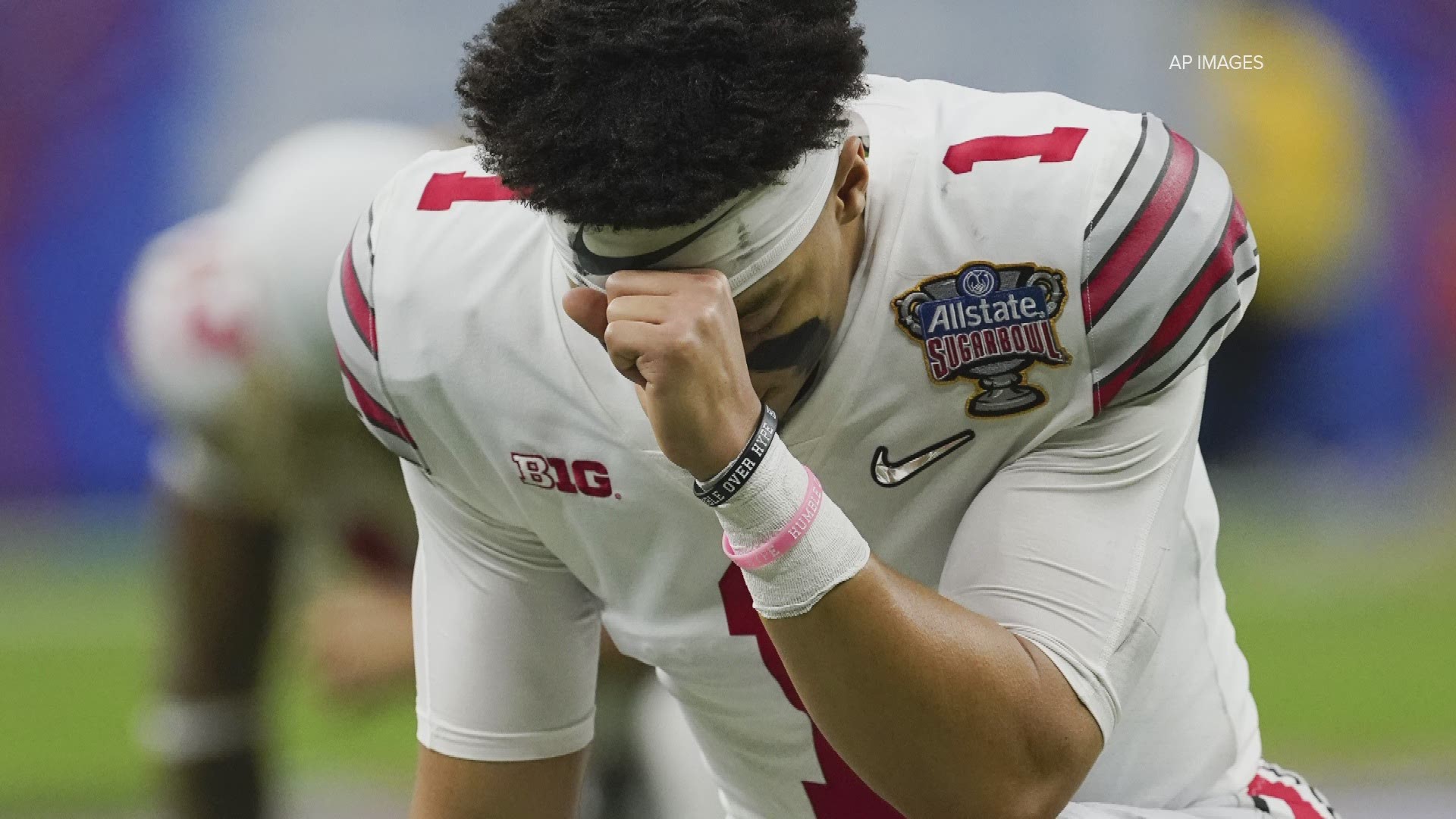 MARIETTA, Ga. — Perhaps no one has faced more scrutiny this college football season than Justin Fields and Ohio State.

Qualms about the number of games the Buckeyes have played, to trying to overcome last season's late interception against Clemson in the Fiesta Bowl, to his health, whether it be his wrist or now his ribs.

And it's been that way since Fields was a star recruit at Harrison High School. Could he live up to the hype at Georgia? And numerous questions about whether or not he's better than Trevor Lawrence, who was the top quarterback in Georgia at the time, one spot ahead of Fields.

Look at the NFL Mock Drafts: Lawrence the first quarterback, Fields behind him.

"When everyone wants to be critical, you know he's going to have a good game," Matt Dickmann said, Fields' high school football coach at Harrison.

That's exactly what happened when Fields threw six touchdown passes against a well-coached Clemson defense to overcome the Tigers and get the Buckeyes back in the national championship for the first time since 2015.

But it happened because Fields' got a chance. Ohio State head coach Ryan Day made Fields prove himself, but Dickmann said he believes Fields didn't feel he didn't get an adequate chance at Georgia behind Jake Fromm.

"I think he looked at what went on at Clemson, with Trevor being a freshman and un-seating the other guy and getting a shot. And I just felt he thought there was no plan for him," Dickmann said.

Fields would come in sporadically for the Bulldogs. No snap during his time at UGA was more talked about and controversial than Fields attempting a fake punt against Alabama in the SEC Championship on 4th-and-11. Fields managed to get 2 yards, but Kirby Smart said a wide-open receiver was missed on that play.

Fields transferred in the next offseason.

"Instead of continuing to go with that plan. He wanted to have a chance," Dickman said.

"I think the connection Coach Day and I had from day one was genuine," Fields said. "I knew he was going to make me a better player, and that's all I was really worried about when choosing schools."

Day didn't give up when his transfer quarterback threw one bad pass against Clemson in the Fiesta Bowl, ending the Buckeyes' title hopes in 2020.

Fields' has faced the tough times. The criticism. The doubt.

And while Day doesn't provide injury updates, he did confirm Fields will play.

One last shot to the ribs won't keep him out.

Dickman thinks Fields broke his routine of listening to the noise.

"He's always been cool, calm and collect. From what I hear, it may have gotten to him a bit. But he's his worst own critic."

Beating Alabama would silence them once and for all... until he's in the NFL, of course.