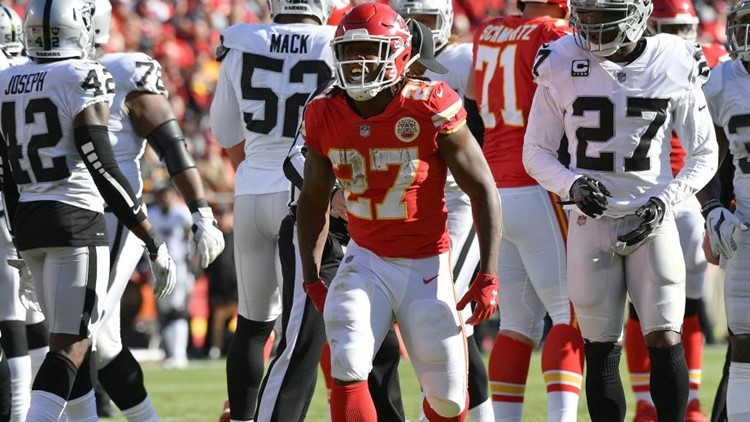 We're talking about premium knowledge that will surely help your weekend cause if/when ...

a) Attempting to win barstool debates among strangers,

b) Unwittingly pushing your spouse or family to the absolute breaking point of delirium, assuming they don't also eat, breathe and live for football.

Can Luck make it No. 9 this weekend against the Jaguars? History says no, citing two reasons:

a) Jacksonville has allowed only 1.4 passing TDs per game, the second-lowest tally in the league.

b) Of his last seven games played outside on grass, Luck holds mere averages of 248 yards passing and two passing TDs.

2. Check out the most meaningless streak of the week:

Of course, during this same stretch, the Chiefs tailback boasts supreme per-game averages of 127 total yards and 1.3 touchdowns.

The odds of Hunt eclipsing the above tallies are excellent.

3. The Steelers' tandem of Antonio Brown and JuJu Smith-Schuster rank 1-2 in receiving targets since Week 8, totaling 98 during this prolific stretch.

And speaking of wonderful numbers ... say hello to our favorite stat every year:

That's quite a big sample size; and yet every time, there are a handful of Doubting Thomases when playoff bids are on the line.

4. It's hard to beat the infallibility of Eagles tight end Zach Ertz, especially with intra-division activity:

Of his last nine complete games against the NFC East, Ertz holds remarkably consistent tallies of eight catches, 81 yards and one touchdown.

And this includes the clunker of all clunkers, catching only two balls for eight yards versus the Cowboys.

Which begs the question: What kind of track record does Miller have following great games?

This week, Miller draws the Browns defense, which ranks in the bottom-6 for rushing yards and rushing TDs allowed.

6. Seahawks quarterback Russell Wilson has accounted for multiple TDs in 20 of his last 22 games.

Now for the bad news:

Of his last 10 outings against the 49ers, Wilson tallied zero or one touchdown a staggering eight times.

7. Packers wideout Davante Adams has racked up 100 yards receiving and/or one touchdown in 12 of his last 13 games, with the lone clunker involving eight catches, 14 targets and 81 yards (vs. Buffalo).

Here's another fun thing to celebrate: Against the NFC West this year, Adams owns absurd averages of 8.3 catches, 144 yards and 0.3 TDs.

8. Rams tailback Todd Gurley might be a strong candidate for Fantasy MVP, but he's surprisingly mortal under one scenario:

Is it possible the Rams' prodigious offense works better outside ... on natural grass?

Of course, that doesn't mean Gurley should be benched in any situation this week. Last we checked, the Lions were surrendering 5.2 yards per rush.

9. Go ahead and book Emmanuel Sanders for fantasy greatness this week (@ Bengals).

Of equal importance, the Bengals have allowed opposing wideouts to post a sterling catch-to-target rate of 63 percent this season.

10. The Buccaneers have the NFL's worst pass defense, when lamenting three factors:

a) Tampa Bay has surrendered the most TD passes this season (26).

b) The Bucs rank 27th against the pass, allowing 292 airborne yards per game.

c) Opposing quarterbacks own a staggering TD-INT ratio of 26/3 against the Bucs.

Which brings us to this: