Baker Mayfield threw for a touchdown and ran for another as the fans made themselves heard throughout. 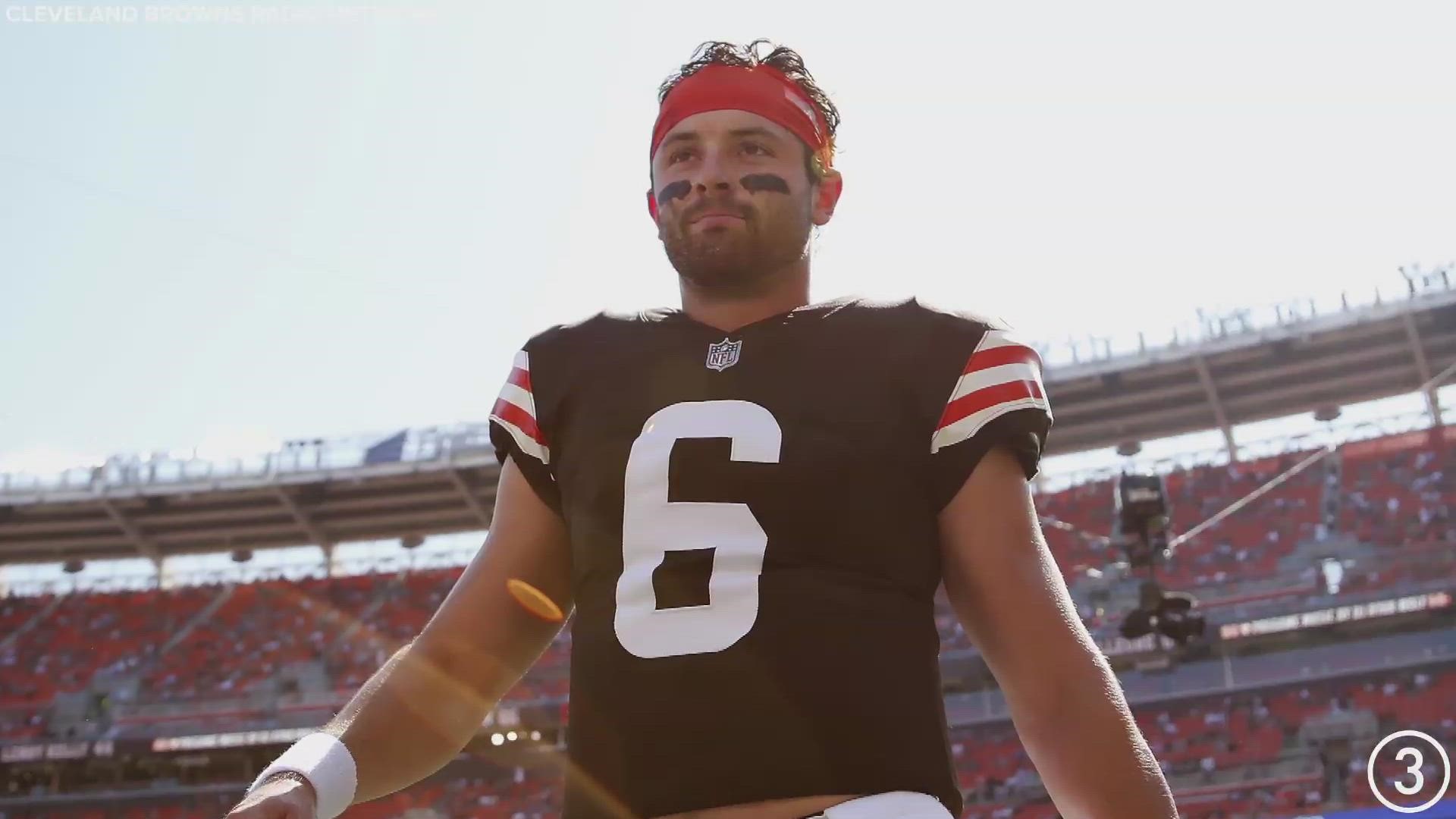 CLEVELAND — Cleveland football fans had been waiting for this for a long time, and while it wasn't exactly a thing of beauty, the end result was still absolutely perfect.

The Browns beat the Houston Texans Sunday 31-21 in FirstEnergy Stadium’s first full-capacity game since December of 2020. The sold-out crowd made themselves heard throughout, aiding the Brown and Orange in their first win of the 2021 season.

Baker Mayfield injured his left shoulder in the first half, but didn't miss a snap, finishing 19 of 21 for 213 yards and a touchdown. He also ran for a score late in the first half to tie the game at 14, the first in a string of 17 unanswered points for the Browns.

The potent Cleveland running game was strong again, with Nick Chubb tallying 95 yards and a 26-yard touchdown to essentially put the game away in the fourth quarter. Rookie Demetric Felton also had a 33-yard TD on a screen pass from Mayfield, boosting a receiving core that was already without Odell Beckham Jr. and later lost Jarvis Landry early to a knee injury on the first drive.

The new-look defense was still spotty, allowing multiple long Houston scoring drives. Still, there were plenty of highlights, including a diving interception by Malcolm Smith and a sack by Grant Delpit in his NFL debut.

Texans quarterback Tyrod Taylor hurt his hamstring just before halftime and was relieved the rest of the way by rookie Davis Mills, who went 8 for 18 for 102 yards and a touchdown. Brandin Cooks added nine receptions for 78 yards and that score.

The Browns will host the Chicago Bears next Sunday, with both teams entering with identical 1-1 records. Cleveland has not beaten Chicago since 2005.

What follows is a comprehensive, drive-by-drive recap of today's action, with the most recent plays and updates closest to the top. Stay tuned for more analysis throughout the day on both 3News and WKYC.com.

1:59: The Texans had one last chance to get back in the game, but deep in Browns territory, Grant Delpit nailed Davis Mills for a sack. Joey Slye subsequently missed a 41-yard field goal, and the Browns will now only have to run out the clock to get their first win of the year.

Big time sack by @realgrantdelpit in his debut.

3:33: The Browns return the favor with a three-and-out of their own, but Jamie Gillan's punt pins the Texans at their own 12-yard line. Houston needs two scores but has just one timeout (plus the two-minute warning) remaining.

5:19: After draining 8:08 on their last drive, the Texans use up just 33 seconds on their next possession to go three-and-out. Demetric Felton returns the ensuing punt 15 yards to the Browns 37.

5:52 - Browns 31, Texans 21: Time to unleash Nick Chubb. The star running back hits the hole and bursts 26 yards for the touchdown to give the Browns some much-needed insurance.

To the crib 🏠 @NickChubb21 #Browns

11:32 - Browns 24, Texans 21: The Texans burn more than eight minutes off the clock with a 16-play drive that ends with a 2-yard touchdown pass from Davis Mills to Brandin Cooks.

4:40 - Browns 24, Texans 14: The Browns can't go much further after the takeaway, but Chase McLaughlin converts a 30-yard field goal to make it a two-possession game.

Also, Blake Hance is in at left tackle for Jedrick Wills Jr., who started the game but labored at times due to an ankle injury.

6:17: Time to kick it into high-gear: Malcolm Smith steals the ball away from Andre Roberts for the interception, and the Browns have the ball right back on the Texans 18-yard line.

Also, some injury updates from the Texans sideline:

7:50 - Browns 21, Texans 14: The Browns passing attack finds its groove, as Baker Mayfield finds Demetric Felton on a screen that goes 33 yards for a touchdown. It's the first career score for the rookie out of UCLA.

No one was going to stop @Demetricfelton7!

13:42: Rookie Davis Mills is in at quarterback for the Texans after Tyrod Taylor appeared to injure himself on that first-half touchdown run. The Texans go three-and-out for the first time today to force a Cameron Johnston punt, which Demetric Felton returns to the Browns 28.

Some bad news, though: Jarvis Landry will officially not return after injuring his knee early in the game.

0:00: Despite having all three timeouts, Texans head coach David Culley elects to run out the clock before halftime. The Browns do force a punt that Demetric Felton muffs, but he falls on the ball as time expires into intermission.

1:14 - Texans 14, Browns 14: Baker Mayfield returns as Nick Chubb and Kareem Hunt help lead the Browns deep into Houston territory. On third down, Mayfield takes it in himself for a 5-yard touchdown run to tie the game back up.

No. 6️⃣ is in for 6️⃣. @bakermayfield #Browns

7:06 - Texans 14, Browns 7: Houston takes the lead on a 16-yard touchdown run by Tyrod Taylor. The Cleveland defense whiffed on multiple chances to stop him.

Hot Rod Tyrod 🏎️🔥 is on the move!@TyrodTaylor | 📺 » @NFLonCBS pic.twitter.com/TwIF6QGQGI

Some good news? Baker Mayfield is back on the sideline and appears to be staying in the game.

9:54: Things just went from bad to worse for the Browns... First, Baker Mayfield threw an interception to Justin Reid. Then, Mayfield himself tackled Reid on the return, only to suffer an injury on the play.

At any rate, the Texans have the ball at the Cleveland 47-yard line.

14:18: The Browns defense finally gets a stop on third down and forces a Cameron Johnston punt, which sails into the end zone for a touchback. The Texans actually had an opportunity to run another third-down play after an offsides flag, but David Culley (for reasons unknown) chose to decline the penalty and punt on fourth-and-2.

2:13: The Browns drive into Texans territory, but after Baker Mayfield finds Donovan Peoples-Jones for a first down Justin Reid knocks the ball loose, and former Cleveland linebacker Christian Kirksey recovers the fumble. It'll be first-and-10 for Houston at its own 27-yard line.

5:18 - Texans 7, Browns 7: The Texans answer right back, as Tyrod Taylor caps an 84-yard drive with a 22-yard touchdown pass on a screen to Phillip Lindsay.

PHILTHY PHIL picking up where he left off 💪@I_CU_boy | 📺 » @NFLonCBS pic.twitter.com/Za4ChpizBM

9:56 - Browns 7, Texans 0: A beautiful pitch-and-catch from Baker Mayfield to Harrison Bryant sets up a first-and-goal for the Browns, and three plays later fullback Andy Janovich punches it in for his first touchdown since 2019.

WE GOT A FULLBACK TOUCHDOWN! @AndyJanovich #Browns

Some concerning news, though: Jarvis Landry injured his knee on the opening drive and is questionable to return.

11:58: The Browns offense stalls at its own 35, but Texans returner Andre Roberts can't handle Jamie Gillan's punt. Sione Takitaki recovers the muffed kick, and Cleveland has new life at the Houston 35.

12:47 p.m.: This past offseason, the Cleveland sports media lost two of its most beloved members: legendary radio host Les Levine and longtime Browns stat crew member Gary Salzinger. The team left two spots open for them in the press box, and also held a moment of silence for both prior to kickoff.

The Cleveland Browns pay tribute to legendary talk radio host Les Levine and former stat crew member Gary Salzinger, who each passed away since the end of last season. pic.twitter.com/4L1LAs11gi

11:47 a.m.: Despite suffering an ankle injury last wee against the Chiefs, left tackle Jedrick Wills Jr. will start for the Browns today. Safety Grant Delpit will also make his NFL debut after missing all of last year with an Achilles tear, and wide receiver Anthony Schwartz will play after being listed as questionable during the week.

Meanwhile, the following players are inactive:

7:22 a.m.: Not only are restrictions gone inside FirstEnergy Stadium, but also at the Muni Lot. Fans packed the area as early as 2 a.m. Sunday.