RECAP: Full coverage of the first round of the 2021 NFL Draft in Cleveland

Even during a pandemic, tens of thousands of visitors were in Clevealnd to kick off one heck of a party!

CLEVELAND — The moment has finally arrived.

The 2021 NFL Draft has made its way to Cleveland, with tens of thousands of fans pouring into the lakefront to see who their teams will select this year. Even during a pandemic, hotels and businesses are bustling, and round one was one heck of a party.

This marks the first time in two years spectators will be allowed to attend the draft, after COVID-19 forced last year's event to go all-remote. The league is allowing fully vaccinated people directly into the area with the main draft stage, while others can still take part in spectacles such as the NFL Draft Experience festival as well as other attractions throughout downtown Cleveland. Some health restrictions are also being relaxed as more people get vaccinated, per CDC recommendations.

As for the draft itself, there wasn't a lot of drama surrounding the first two picks, with the Jacksonville Jaguars taking decorated Clemson quarterback Trevor Lawrence at No. 1 and the New York Jets taking BYU QB Zach Wilson No. 2. After much debate, the San Francisco 49ers took North Dakota State quarterback Trey Lance with the No. 3 pick, while Ohio State's Justin Fields went No. 11 to the Chicago Bears (who traded up to get him) and Alabama's Mac Jones went No. 15 to the New England Patriots.

The first seven players off the board were from the offensive side of the ball, while Round 1 wrapped up with five consecutive defensive players. Round No. 2 of the 2021 NFL Draft begins Friday, April 30, at 7 p.m.

We'll have live, up-to-the-minute coverage for you throughout the weekend, with updates on both football as well as the atmosphere. Scroll below to see what's happening now!

12:02 a.m. - Just after midnight the Super Bowl Champion Tampa Bay Buccaneers wrapped up the first round of the 2021 NFL Draft. With the last pick of the first round, the Bucs selected Washington LB Joe Tryon.

Saved the best for last.

11:59 p.m. - With the Baltimore Ravens' second pick of the first round, and the penultimate pick of Round 1, they select LB Jayson Oweh from Penn State.

11:43 p.m. - It's been a long night for the Green Bay Packers. After reports that future Hall of Famer Aaron Rodgers wants out of Green Bay, the Packers go with a cornerback out of Georgia in Eric Stokes.

With the No. 29 overall pick in the 2021 @NFLDraft, the @packers select CB Eric Stokes!

With the 28th pick in the 2021 #NFLDraft, the Saints select: DE Payton Turner from Houston! #SaintsDraft |@CoxComm pic.twitter.com/um7bV79e5x

The moment @gnewsii got the call from the @Browns!

11:15 p.m. - The Jacksonville Jaguars are back on the clock after trading up. They select their new franchise QB's battery mate in Clemson RB Travis Etienne. The Cleveland Browns are now on the clock.

With the No. 25 overall pick in the 2021 @NFLDraft, the @Jaguars select RB Travis Etienne!

11:11 p.m. - The Pittsburgh Steelers take the sixth Alabama player and just the first running back in the draft with Najee Harris. The Crimson Tide have tied the record for most picks in the first round with the Miami Hurricanes.

With the 24th pick in the #NFLDraft, we select RB Najee Harris. #SteelersDraft pic.twitter.com/uKyA7FqK0e

And a not-so-welcome sight in Cleveland

This is a travesty. pic.twitter.com/YCx7llpuvd

11:06 p.m. - Back to back Hokies off the board. After trading back to the 23rd pick, the Minnesota Vikings take OT Christian Darrisaw.

With the No. 23 overall pick in the 2021 @NFLDraft, the @Vikings select OL Christian Darrisaw!

11:00 p.m. - With the 22nd overall pick, the Tennessee Titans select Virginia Tech's Caleb Farley. Farley tested positive for COVID-19 earlier this week, but posted on Twitter earlier today that he had tested negative.

With the No. 20 overall pick in the 2021 @NFLDraft, the @Giants select WR Kadarius Toney!

With the No. 19 overall pick in the 2021 @NFLDraft, @WashingtonNFL selects LB Jamin Davis!

10:30 p.m. - The Miami Dolphins get their second pick of the fourth round taking Miami's Jaelan Phillips. Phillips had to medically retire in 2018 during his time with UCLA, but came back in 2020 with the Hurricanes, notching 45 tackles and eight sacks.

10:26 p.m. - The Las Vegas Raiders take yet another Alabama player with G Alex Leatherwood. So far five members of the Crimson Tide have been selected.

Welcome to the Silver and Black, Alex Leatherwood!#RaiderNation | @AlabamaFTBL pic.twitter.com/h5jsdVs5tR

10:19 p.m. - We're officially halfway through round one. The Arizona Cardinals take Tulsa LB Zaven Collins with the 16th overall pick.

With the No. 16 overall pick in the 2021 @NFLDraft, the @AZCardinals select LB Zaven Collins!

10:13 p.m. - The New England Patriots have drafted their next quarterback. Alabama QB Mac Jones shifts from one winning culture under Nick Saban, to another under Bill Belichick. Jones is the last of the big five QBs, and the fourth Alabama player off the board.

10:10 p.m.  - The New York Jets have traded picks with the Minnesota Vikings to move up to 14th. With their second pick in the first round, the Jets take USC guard Alijah Vera-Tucker to help protect their new QB Zach Wilson.

10:01 p.m. - The Los Angeles Chargers Northwestern tackle Rashawn Slater with the 13th overall pick. The Chargers seem like they're "feelin' lucky" with the pick:

9:51 p.m. - The Cleveland Browns are clearly not used to picking so late in round one. They seem to be waiting around:

9:50 p.m. - After trading back from the 10th to the 12th pick, the Dallas Cowboys select Penn State LB Micah Parsons to supplement their defense. Parsons opted out of the 2020 season.

With the No. 12 overall pick in the 2021 @NFLDraft, the @dallascowboys select LB Micah Parsons!

9:43 p.m. - Buckeye Justin Fields is heading to Chicago. The Bears have traded up to pick Fields, the fourth quarterback off the board. Just last week, the former Buckeye announced he was battling epilepsy.

9:39 p.m. - The second trade of the night, the New York Giants give up their 11th overall pick to the Chicago Bears. The Giants move back to pick 20.

With the 10th pick in the 2021 #NFLDraft, the Eagles select WR Devonta Smith.@DietzandWatson | #EaglesDraft pic.twitter.com/dkIucBsKLT

9:25 p.m. - The second consecutive corner back comes off the draft board after the Denver Broncos select Alabama's Patrick Surtain II

Welcome to the Broncos, @PatSurtainll!!!

Denver selects the former @AlabamaFTBL cornerback with the No. 9 overall pick in the 2021 #NFLDraft #9sports #BroncosCountry pic.twitter.com/eselHT8lba

9:17 p.m. - Jaycee Horn becomes the first defensive player off the board. Horn is the son of former New Orleans Saints WR Joe Horn.

RELATED: Panthers select CB Horn with No. 8 pick in the NFL draft

9:11 p.m. - The Detroit Lions take the first non-skill position player in Oregon's Penei Sewell. The first seven picks have all been offensive players.

9:04 p.m. - The Miami Dolphins take Jaylin Waddle, WR from Alabama with the sixth overall pick. Waddle is the third player from the SEC off the board. 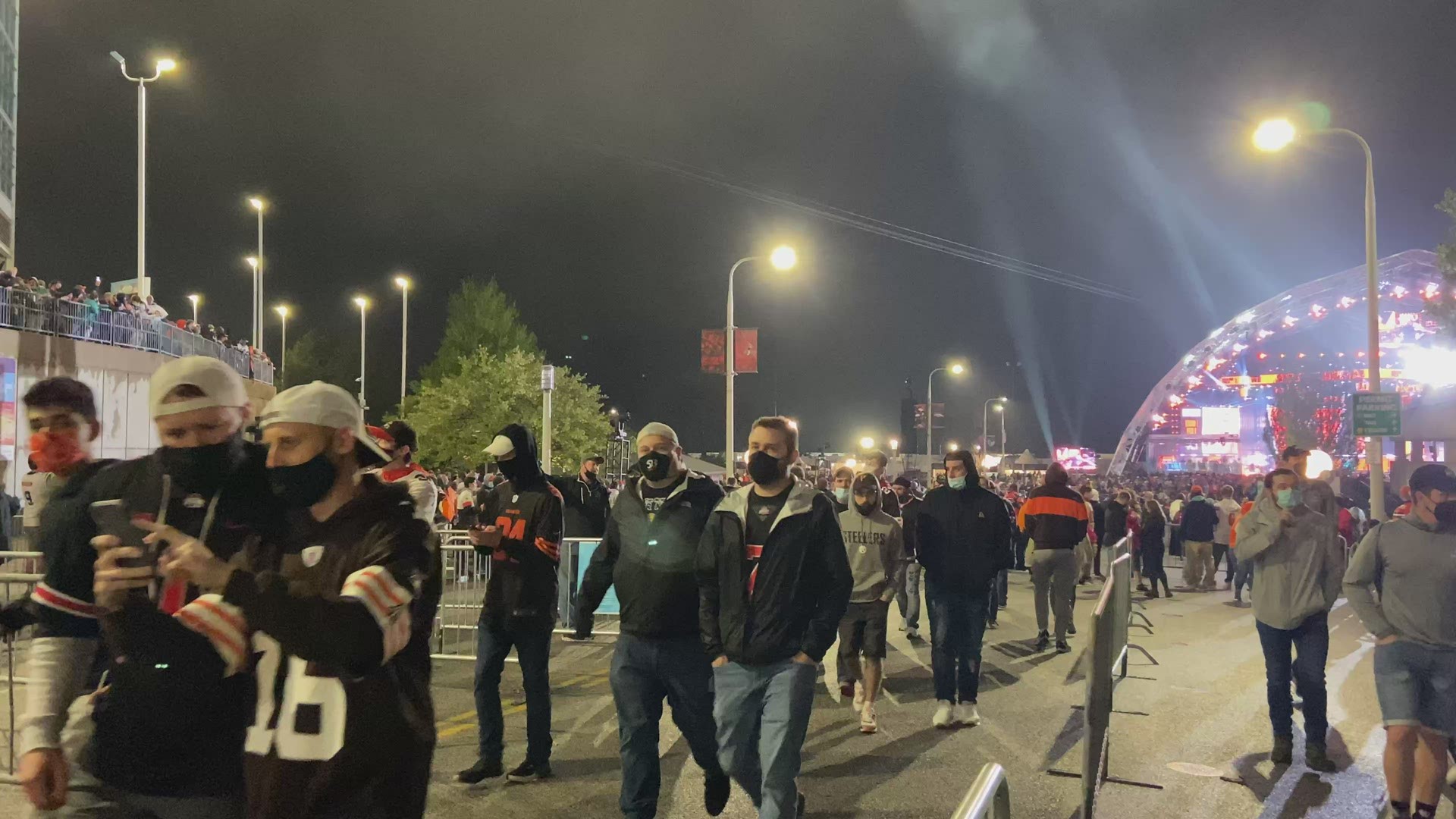 8:57 p.m. - The first Ohio pick in the draft is in, and the first wide receiver is off the board! The Cincinnati Bengals take LSU's Ja'Marr Chase, who will have the chance to reunite with his former QB Joe Burrow.

With the 4th pick in the #NFLDraft, we have selected TE Kyle Pitts.

8:41 p.m. - Many considered the 49ers' selection at number three overall the first true question mark coming into tonight's draft. The 49ers take the third quarterback off the board in North Dakota State's Trey Lance.

8:33 p.m. - For the second time in two years, the New York Jets have selected a quarterback with their first pick. This time they go with BYU quarterback Zach Wilson. The Jets will look to Wilson to lead them to the future after trading QB Sam Darnold earlier this month.

8:25 p.m. - Nearly a foregone conclusion, the Jacksonville Jaguars have selected Clemson QB Trevor Lawrence with the number one overall pick in the 2021 NFL Draft. Lawrence is home celebrating with his family. You can read more on Jacksonville's newest player here. 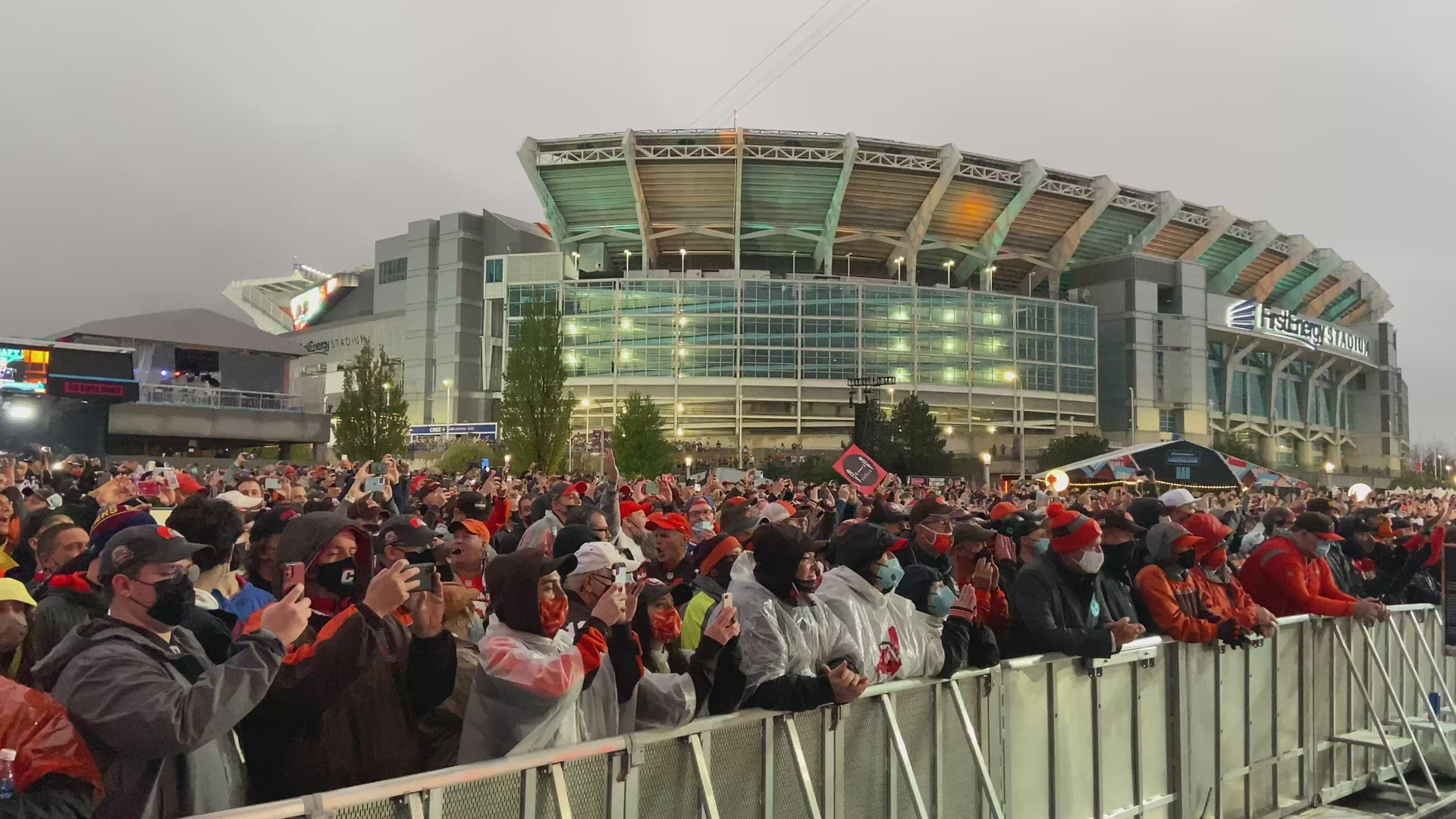 8:15 p.m. - The 2021 NFL Draft is officially open, with NFL commissioner receiving the traditional "boos" from the crowd. The Jacksonville Jaguars are on the clock.

The @Jaguars are on the clock.

Honored To Be Next To These Gentleman Representing Cleveland #NFLDraft pic.twitter.com/gdbLGLRQQJ

Joe Thomas leads a "Here we go Brownies" chant to kick things off.

6:16 p.m. - NFL Commissioner Roger Goodell has arrived at the draft stage ahead of night one.

Credit: Jon Adkins WKYC
NFL Commissioner Roger Goodell has arrived at the stage setup ahead of night one of the 2021 NFL Draft

5:15 p.m. - Rain may impact the number of fans downtown for night one of the NFL draft. Destination Cleveland has predicted around 50,000 people down town per night for the event. But, as consumer reporter Danielle Serino found out. Thursday hasn't been a total washout.

4:48 p.m. - According to reports, three-time NFL MVP Aaron Rodgers is looking to move on from Green Bay. The news was first reported by ESPN's Adam Schefter, and later confirmed by CBS Sports. Earlier today Schefter also reported that the San Francisco 49ers called the Packers Wednesday night in an effort to trade for Rodgers. Packers general manager Brian Gutekunst has said the team remains committed to Rodgers.

Reigning MVP Aaron Rodgers is so disgruntled with the Green Bay Packers that he has told some within the organization that he does not want to return to the team, league and team sources told ESPN on Thursday.

4:39 p.m. - Check out some of the sights and sounds from the NFL Draft Experience!

1:52 p.m. - After a couple days of warm weather, temperatures have dropped a bit in Cleveland, and rain has also been falling on and off. Forecasters hope things will clear up by draft time.

Once our main line of downpours and gusty winds moves out, we’re left with just on and off light showers through 5pm until another round in Indiana works in. Temps will continue to slide across all of northern Ohio. #3weather #wx @wkyc #NFLDraft #cleveland pic.twitter.com/chbi1PhhpM

Andrew and Brittan Berry’s 1st round pick of the 2021 draft came a little early.