The potential for black ice is also "the overriding concern" among emergency officials. 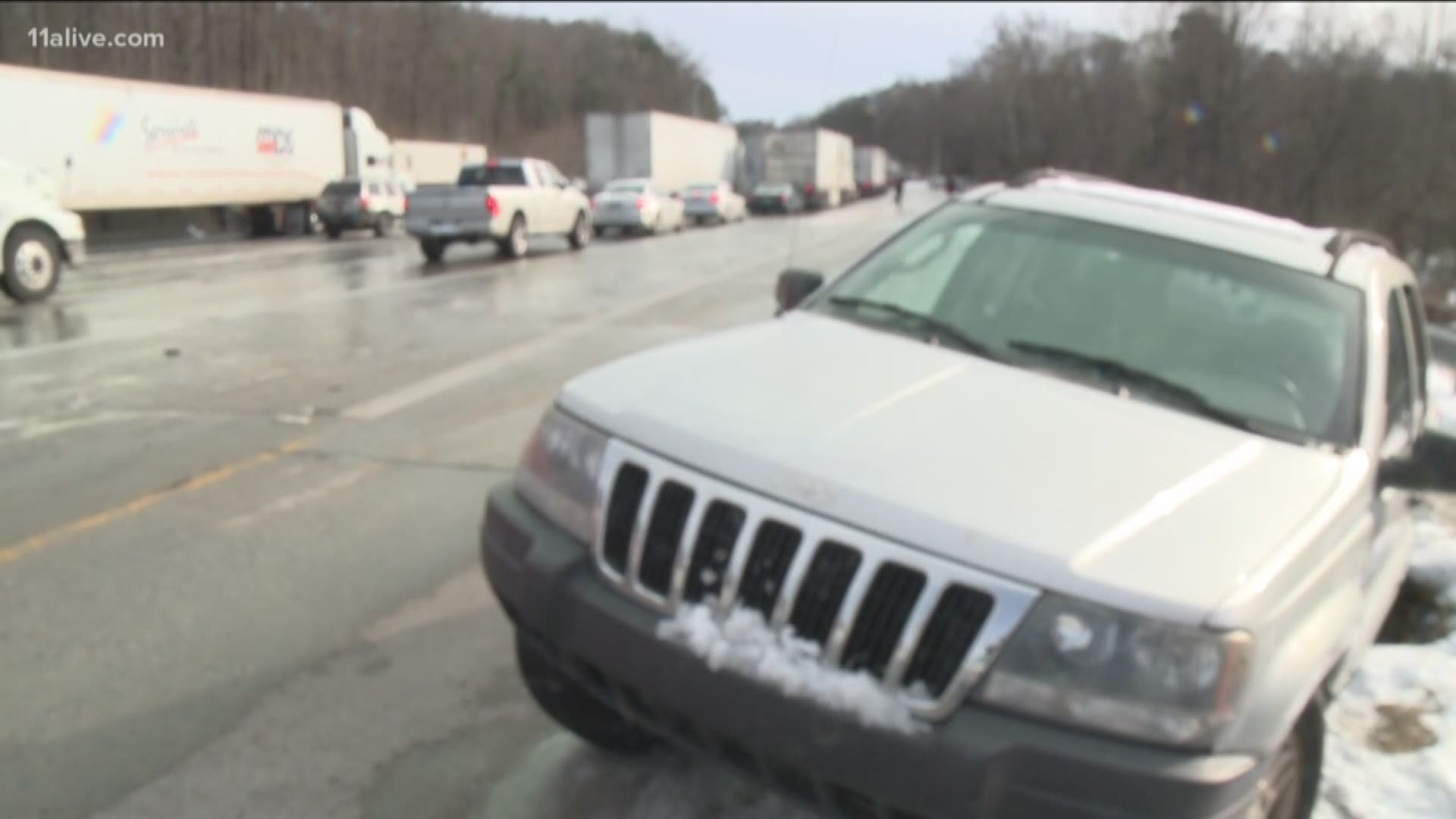 ATLANTA (AP) — Five years after cars, trucks and school buses became marooned on Atlanta freeways in what became known as "snow jam ," another winter storm is threatening the city — just as thousands of fans begin pouring into town for Super Bowl 53.

A winter storm watch goes into effect at 4 a.m. Tuesday for Atlanta, a city known for grinding to a halt even in relatively light snowfalls.

Georgia Gov. Brian Kemp on Monday said state offices in more than 30 counties in the northern part of the state would be closed Tuesday, including those in the Atlanta area.

The 11Alive StormTrackers project that up to an inch (2.5 centimeters) of snow is possible Tuesday in Atlanta, with up to 2 inches (5 centimeters) in far northern suburbs. Forecasters warn of the possibility of ice-glazed roads and highways.

New England Patriots fan Pamela Wales of Quincy, Massachusetts said it's the potential for ice that concerns her most. During her visit to Atlanta this week, local television footage reminded her that Atlanta and ice don't mix well.

"They were showing all kinds of pictures on TV from 2014 when everyone got stuck," Wales said as she toured Super Bowl exhibits at the Georgia World Congress Center Monday afternoon.

The potential for black ice is also "the overriding concern" among emergency officials, said Homer Bryson, director of the Georgia Emergency Management and Homeland Security Agency.

"Temperatures are going to plummet," the governor said at a Monday news conference.

"It's very similar to what we saw in 2014 where the roadways will not have time to dry off before the moisture or precipitation on them refreezes," Kemp said. "And that's when you have black ice, and that's what causes wrecks, which causes gridlock and public safety issues, injuries."

1 / 44
ATLANTA, GA - JANUARY 29: Cars drive along Interstate 75 in icy conditions January 29, 2014 in Atlanta, Georgia. Thousands of motorists were stranded, many overnight, as a winter storm dropped three inches of snow, and ice made driving hazardous. (Photo by Scott Cunninghaml/Getty Images)

Road crews on Monday began treating major interstates, state routes and overpasses in north Georgia with brine — a liquid salt mixture — in anticipation of the storm.

The routes that both the New England Patriots and Los Angeles Rams must use to travel to and from practice venues will also be pre-treated, the Georgia Department of Transportation said in a statement.

Sunday's Super Bowl will be played in downtown Atlanta in Mercedes-Benz Stadium, which has a roof. The roof will be open if weather permits, officials have said.

There's a 40 percent chance of showers Sunday, but highs will be near 58 degrees (14 Celsius). That's slightly warmer than average for Feb. 3 in Atlanta, climate records show.

But forecasters say the more immediate threat is Tuesday, when roads could be treacherous.

"It is often easy to pass judgment on how we in Georgia deal with snow and ice, but for those from the north what you do know is that an ice event is very different than a snow event," Atlanta Mayor Keisha Lance Bottoms said Monday. "And because we don't want a repeat of 2014, we have already begun to pretreat our streets and are paying particularly attention to our sidewalks because we do know that we will have many visitors in our tourist areas."

About 1,900 employees were on call and more than 420 pieces of snow removal equipment were ready, the state Department of Transportation said.

Forecasters were uncertain how widespread the snowfall will be.

"Some uncertainty continues regarding amounts of snow accumulations and how far south and east the threat may extend," the weather service said in a Monday update on the approaching storm.

Past Super Bowl weeks have been marred by wintry weather, including the 2011 game in Arlington, Texas. Ice coated roads around metro Dallas during the week before Green Bay defeated Pittsburgh that year. Chunks of ice also tumbled from the roof of Cowboys Stadium, hurting six workers on the ground. None of the injuries were considered life-threatening.

In 2000, the St. Louis Rams and Tennessee Titans arrived in Atlanta shortly after an ice storm brought traffic in the city to a standstill.

Unseasonably cold temperatures followed, and both teams had to practice outdoors since the Georgia Dome was being used for Super Bowl pregame and halftime rehearsals. The Rams wore winter jackets and thermal underwear in the biting cold.

"It's ridiculous," Rams coach Dick Vermeil said at the time. "But there's nothing you can do about it except try to survive."