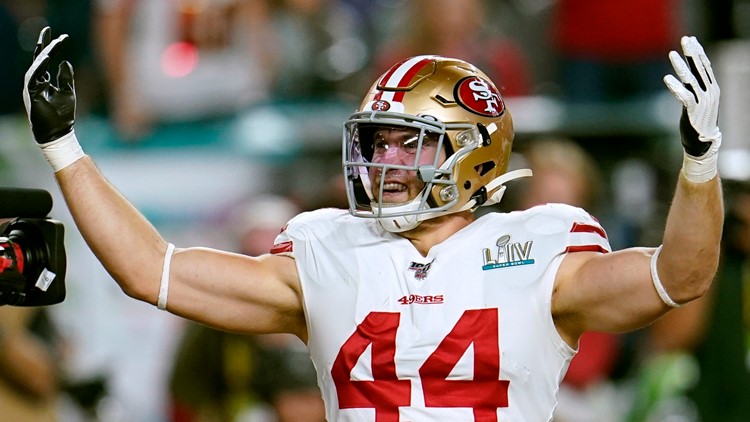 CLEVELAND — While two Greater Cleveland natives served as captains for the Kansas City Chiefs in Super Bowl LIV, it was another Northeast Ohioan who got the San Francisco 49ers into the end zone for the first time in the game.

One drive after the 49ers turned over the ball on an interception, Lodi Cloverleaf High School graduate Kyle Juszczyk caught a pass from quarterback Jimmy Garoppolo, slipped out of a tackle and dove across the goal line for the touchdown.

The ensuing extra point drew the 49ers even with the Chiefs, 10-10, with 5:05 remaining in the first half of Super Bowl LIV from Hard Rock Stadium in Miami Gardens, Florida.

On first-and-10 from the Kansas City 15-yard line, Garoppolo took the snap under center, turned to his left and utilized a play-action fake to running back Tevin Coleman before rolling out to his right. Juszczyk lined up on the right side of the formation and ran toward the middle of the field, before pivoting and sprinting toward the sideline.

Juszczyk secured the catch in front of a defender at the Kansas City 12-yard line and shook free from a tackle attempt by free safety Daniel Sorensen before sprinting toward the goal line, where he picked up a block from tight end George Kittle.

That block at the two-yard line gave Juszczyk a cut-back lane, which he utilized to gain the final two yards by diving over the goal line and into the end zone bearing San Francisco’s nickname.

“The skills that Kyle possesses fits in with Kyle Shanahan’s offense,” Bob Lake, Juszczyk’s former coach at Cloverleaf, told 3News earlier this week. “After he was All-Pro with the Baltimore Ravens, when he signed with San Francisco, we were all very ecstatic. We thought, ‘Wow, this is great for his career. It gives him a chance to showcase all his skills of blocking, running, catching and splitting him out at receiver.’

“He can do all those things, and this offense is perfect for him. We were very excited about that, and to see it come to this level, I don’t know if I could’ve envisioned that at the time, but I’m not surprised at all. He’s a big part of their success this year.”