Advances in technology in implants can be life-changing. 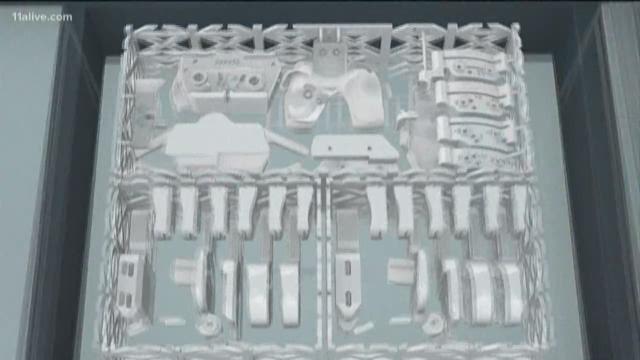 For the past two weeks, Olympic fans have watched some of the best athletes in the world navigate treacherous jumps and speed on the slopes of South Korea.

For some, just watching skiers is enough to make our knees hurt.

There are more than 600,000 knee replacements performed every year, according to the Agency for Healthcare Research and Quality. Advances in technology in implants can be life-changing, according to longtime athlete Glenn Sikes.

"I pretty much had knee problems even through high school. I didn't have my surgery until I got to college," Sikes said. Ten years later, torn cartilage required more frequent surgeries on Sikes' knees.

The former UGA pole vaulter's passion for activity, including skiing, was put on pause when the heat in his knees became too much to handle. At age 48, doctors told Sikes it was time for a replacement.

"You couldn't sleep, you couldn't right in the car. It's a constant pain." Sikes said.

He wasn't the only one in the family suffering with each step. His stepfather Jarrett Freeland was also experiencing problems with knee pain.

"Both of us walked like a penguin before we had them done," Freeland said. "And it’s painful, every step was painful."

The pair turned to doctors and 3D technology for help.

"It was a custom knee. It was built for me, and when we talked, the recovery time was a lot less than the standard knee," Sikes said of the technology.

“It's a total knee replacement done based on a patient's anatomy," Peretz said. "It’s done through a computer and 3d printing process where they make an implant specific to that patient and then we use that implant in the operating room."

The patented technology tailors the implant to the patient prior to surgery, a benefit that comes into play in the operating room, according to Peretz.

"There's less risk of issues with contamination when you're cutting down on the number of instruments that you need to the do the surgery. Because it's done it in a pre-navigated fashion, There’s less blood loss at time of surgery. So there’s a lot of advantage to the patient," Peretz said.

"I'm using the Conformis knee because it's custom made. It's as closest as I could get to what I had in there before," Freeland said.

Despite customization, the implant is still not a one-sized fits all approach for patients.

“There are some patients that have problems with their knee related to deformity from prior injuries or trauma… that may need more options available that off the shelf implants provide," Peretz said.

But for Sikes, the step forward in implant technology was enough to get him back on the slopes a little more than a year after surgery.

"Skiing is something that we’ve done, all my family since we were young…so doing it again at 51 and having no pain doing it is outstanding," Sikes said.