The two women were ready to finish what they started last week. Both Thomas and Miller-Uibo are medal contenders. 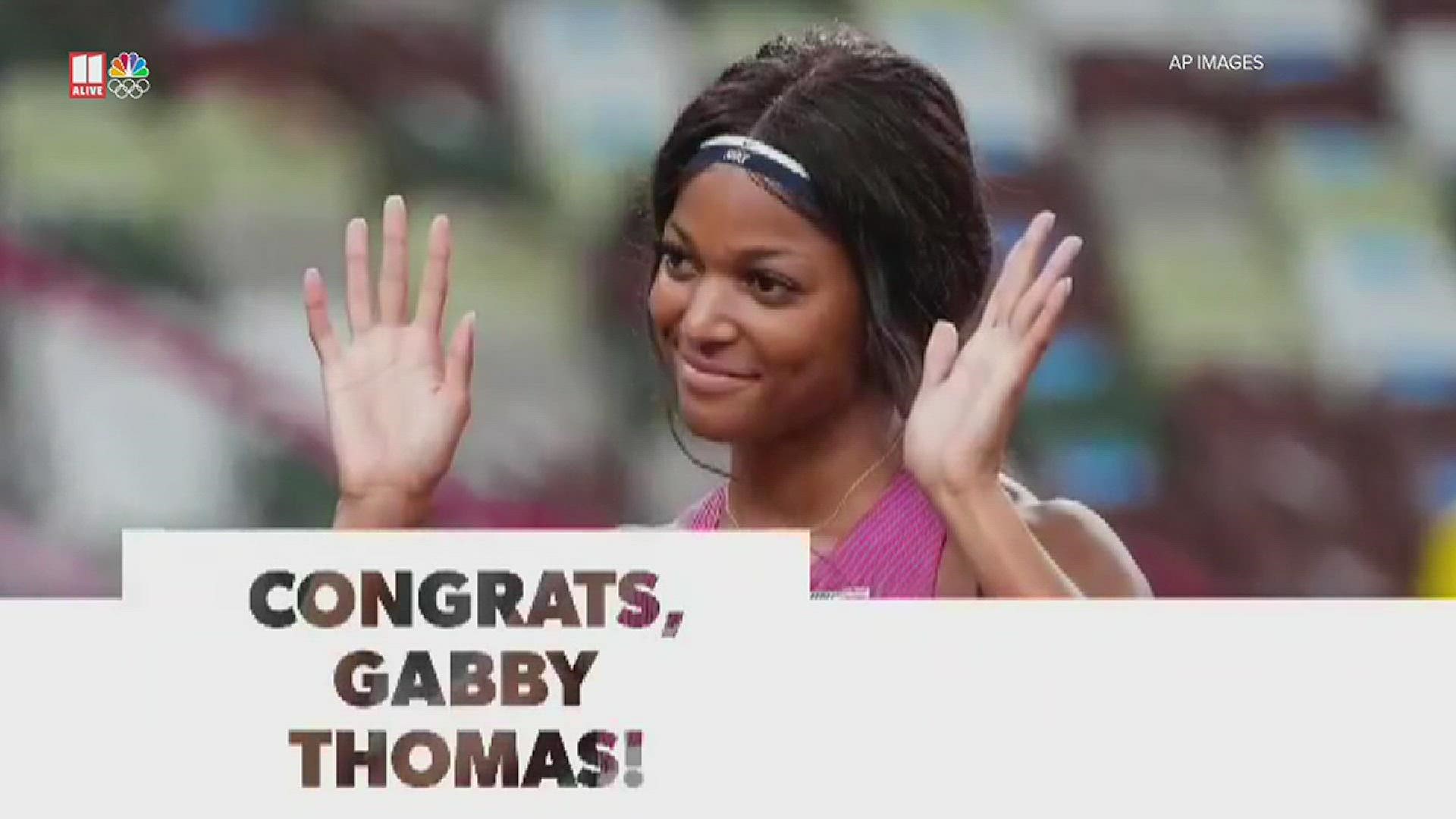 Thomas' finished with a time of 21.87 seconds Thompson-Herah broke Thomas' personal best of 21.61, which she set in the Olympic trials. Before this race, Thomas was the second fastest woman in the 200m after Flo Jo.

Bahamian two-time Olympian Shaunae Miller-Uibo finished last in the race with a time of 24.00 seconds.

Competition heats up for Georgia athletes Gabby Thomas and Shaunae Miller-Uibo as they compete in the women's 200m finals Tuesday at 8:50 a.m. The two women are big contenders for Olympic medals.

Watch as Thomas and Miller-Uibo face off in the women's 200m finals here.

Team USA called Gabrielle Thomas' performance at the women's 200m Olympic trials "FloJo-esque." The 24-year-old, who was born in Atlanta, ran with an astounding time of 21.61 seconds. The only woman in history who has run the 200 meters faster than Thomas was track legend Florence "Flo Jo" Griffith Joyner.

Thomas, whose hometown is Northampton, Massachusetts, is a first-time Olympian. Comparisons to Flo Jo came early during the Olympic trials as she crossed the finish line with her arms in the air -- typical of the track star.

Months before she stepped onto the Olympic track, the former NCAA champion encountered a health scare. While doctors checked on a hamstring injury, they discovered what turned out to be a benign tumor in her liver.

"I remember telling God, 'If I am healthy, I am going to go out and win Trials," she said. 'If this is not cancer, I will make this team. And that's exactly what I did. I'm really grateful.'"

She not only won the Olympic trials and made the team but grazed Flo Jo's 33-year-old record.

Her achievements extend beyond the track as she studied neurobiology and health policy at Harvard University. She's currently pursuing a master's program in epidemiology at the University of Texas.

Credit: AP
Gabrielle Thomas, of United States celebrates after winning the bronze medal in the final of the women's 200-meter at the 2020 Summer Olympics, Tuesday, Aug. 3, 2021, in Tokyo, Japan. (AP Photo/Martin Meissner)

Shaunae Miller-Uibo qualified for the women's 200m finals zooming with Bahamian blue hair and a matching outfit. The University of Georgia graduate representing the Bahamas is a two-time Olympian.

Miller-Uibo's athletic abilities run in her family. Her mom taught her to run around the bases on a softball diamond, racing against her older sister. When she was 10, she competed in the Caribbean Union of Teachers Games in Kingston, Jamaica.

"I ended up winning the overall championship for my division, and, on reflection, that is the moment I started to fall in love with the sport," she said. "I was so inspired I went home to my father and said, 'I want to one day be a Golden Girl'. I think they laughed at me at first, but that's what I am now doing."

The 27-year-old short-distance runner and Rio Olympics gold medalist met her husband while the two were freshmen at UGA. The two had classes in common as well as trained together. Her Estonian decathlete husband joined her in the Olympic journey to gold.

"We would always see each other," Miller-Uibo said. "We became really good friends and the story goes on from there."

In 2016, the sprinter dove across the finish line in the 400m event as she lost her balance. While on the ground, she didn't know if she had won or not. The dramatic and memorable moment of her winning gold remains in the memory of many track fans.

She scraped her knee, stomach and forearms, but it was all worth it for the gold medal.