A mental health advocate said 'in reality, they're all human.' 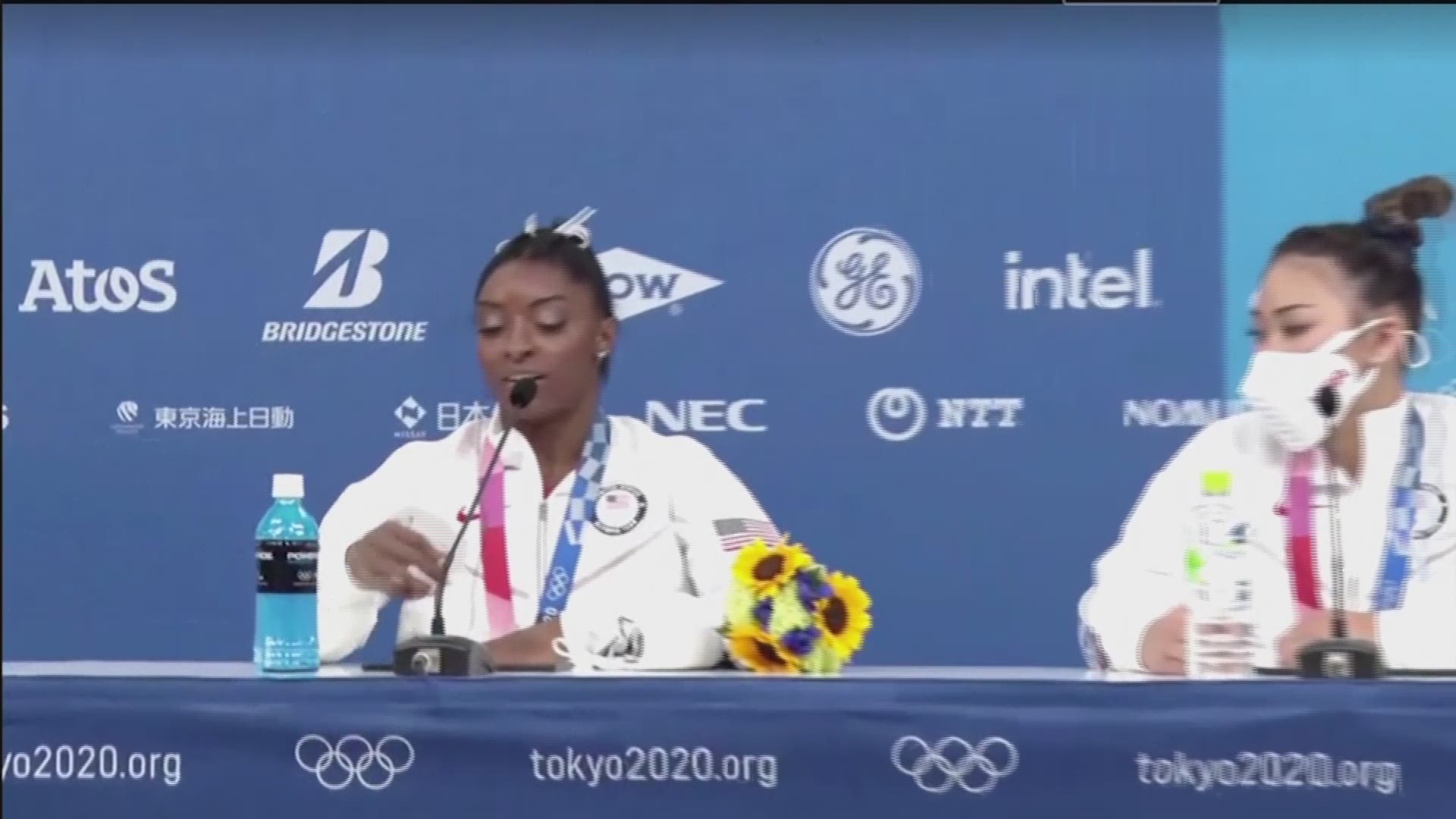 ATLANTA — The biggest headline so far of the Toyko Olympics didn't come from the medal podium or a photo finish - it came when Simone Biles, known as the best gymnast of all time, dropped out of the team final, and one day later, said she wouldn't compete in the individual all-around competition.

The 24-year-old cited her mental health as the reason.

"As fans we look and see them do so many superhuman things, we don't think they act like us in any way. But in reality they're all human," mental performance coach Brian Baxter with AMPlify Sport Psychology told 11Alive's sister station KGW8 in Portland.

Biles is not the only one to recently open up about mental health.

Credit: AP
Coach Laurent Landi embraces Simone Biles, after she exited the team final with apparent injury, at the 2020 Summer Olympics, Tuesday, July 27, 2021, in Tokyo. The 24-year-old reigning Olympic gymnastics champion Biles huddled with a trainer after landing her vault. She then exited the competition floor with the team doctor. (AP Photo/Gregory Bull)

"There is a perception that athletes should stay quiet and keep a façade up for everyone to see. But really, she is even more of a role model in my eyes today because she has become so real," three-time Olympic gold medal swimmer Carrie Steinseifer Bates said.

Just last month, tennis phenom Naomi Osaka withdrew from the French Open, also citing her mental health. The 23-year-old never went to Wimbledon and, after her early exit in Tokyo this week, conceded that the Olympic cauldron was a bit too much to handle.

The most-decorated Olympic swimmer of all time, Michael Phelps, who is working with NBC during the Olympics, came out last year about his personal struggles with depression.

"I hope this is an opportunity for us to jump on board - and to even blow this mental health thing even more wide open. It is so much bigger than we can ever imagine," Phelps told NBC's Mike Tirico following Biles' announcement.

He told ESPN's Jeremy Schaap last year: "This is the most overwhelmed I've ever felt in my life. That's why I have times where I don't want to be me."

RELATED: 'OK not to be OK': Mental health takes top role at Olympics

NBA player Kevin Love opened up about his struggles in his 2018 piece in The Players' Tribune. He said he had a panic attack during a game that season and that he has spent most of his life afraid to accept there was something wrong with him.

“For 29 years, I thought about mental health as someone else’s problem,” he said.

Liz Cambage, a WNBA player who competes for Australia, pulled out of the Olympics a week before they opened because of anxiety over entering a controlled COVID bubble in Tokyo that would have kept her friends and family away.

Credit: AP
Las Vegas Aces' Liz Cambage (8) tries to get a shot off as Seattle Storm's Candice Dupree (4) defends in the first half of a WNBA basketball game Saturday, May 15, 2021, in Everett, Wash. (AP Photo/Elaine Thompson)

"Relying on daily medication to control my anxiety is not the place I want to be right now. Especially walking into competition on the world's biggest sporting stage," she wrote on social media.

The support athletes like Biles and Osaka have received contrasts with an earlier era, when figures like former NFL star Ricky Williams faced scrutiny and, in some cases, ridicule while publicly struggling to compete through mental health issues.

What's next for Biles? We don't know. But we know she's going to continue working on herself.

"I have to do what's right for me and focus on my mental health, and not jeopardize my health and well-being," a tearful Biles said after the Americans won the silver medal in the team competition.

She said she recognized she was not in the right headspace hours before the competition began.

"It was like fighting all those demons," she said.