Across the 1,600 acres, you will see deer lounging around, hanging out near stores and posing for photos. 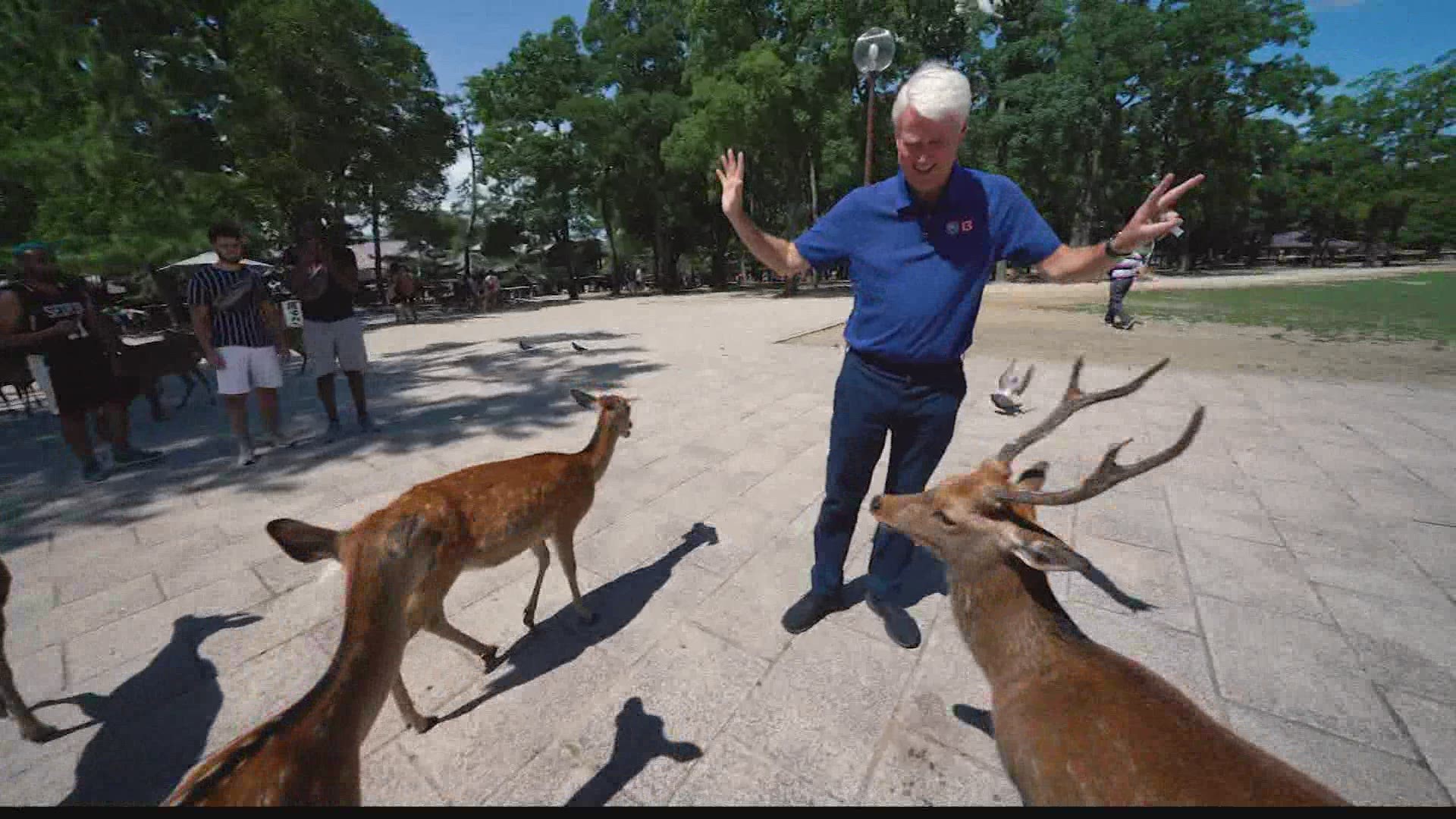 NARA, Japan — There are thousands of Buddhist temples and Shinto shrines around Japan. They connect people to the country's religion, history and culture. But, there's a spot in Japan where the religious architecture takes a backseat to the park residents.

"We're at Nara Park, which is also known as the Deer Park," said visitor Wesley Caulder.

Across the 1,600 acres, you will see deer lounging around, hanging out near stores and posing for photos.

"They're really nice. You can pet them. It's crazy that you can sit there with little Bambi and pet it," one visitor said.

"I think it's like a petting zoo on steroids," Beachum said.

Credit: WTHR
People taking a picture of a deer at Nara Park.

The deer have a special way of saying hello.

"The deer bow as a greeting and expect a treat as part of it, which is interesting watching them walk up to people and bow," Caulder said.

"You feed them and then you bow, and then they bow. That is a cute thing to see," one visitor said.

Legend said one of the four gods of Kasugataisha Shrine traveled to Nara in AD 768 on a white deer. In this part of Japan, they are protected. These deer are hungry too.

"They can tell when you've got something they need," Beachum said.

Credit: WTHR
A visitor feeding the deer at Nara Park.

"The minute you buy them, they know. They smell it. They'll all swarm you," one visitor said.

They will pursue you, surround you and they may even steal your tour map if you are not careful.

"It's kind of overwhelming if you're afraid of deer," one visitor said.

The Summer Olympics begin 8 months from today. One of my favorite places in Japan is Nara Park, home to hungry and friendly deer. My story at 11pm. #WTHR @TEGNA @NBCOlympics #OlympicPreTrip pic.twitter.com/lQPbwWr7Hj

A few of them will get so impatient, they will nibble you. But, if you are feeling brave they will eat a treat from your teeth.

When you have had enough of the deer there are several temples on the ground. The Todaiji Temple features the world's largest bronze Buddha, nearly 50 feet tall. There is a Nara National Museum containing Buddhist art.

"We've traveled a lot. And honestly, the caliber of monuments and palaces and temples has been unreal," Beachum said.

Credit: WTHR
One of the temples at Nara Park in Japan.

When you have toured the temples, you will be drawn back to the animals.

"There's deer everywhere and in America you don't really experience that. You can't really touch a deer," one visitor said.

In Japan, the temples and shrines will always draw big crowds. But in this part of the Olympic host country, come to Nara and bring a snack.

Nara Park and the divine deer

"I'm a little scared of them. I bought the cookies and they swarmed me. I almost ran into the street," one visitor said.

The stars of Nara Park can't wait to see you.

"It's incredible. It's amazing," Caulder said.