It was difficult to know what to do in the moment, especially when it became apparent that the sounds they heard were much more sinister than fireworks. 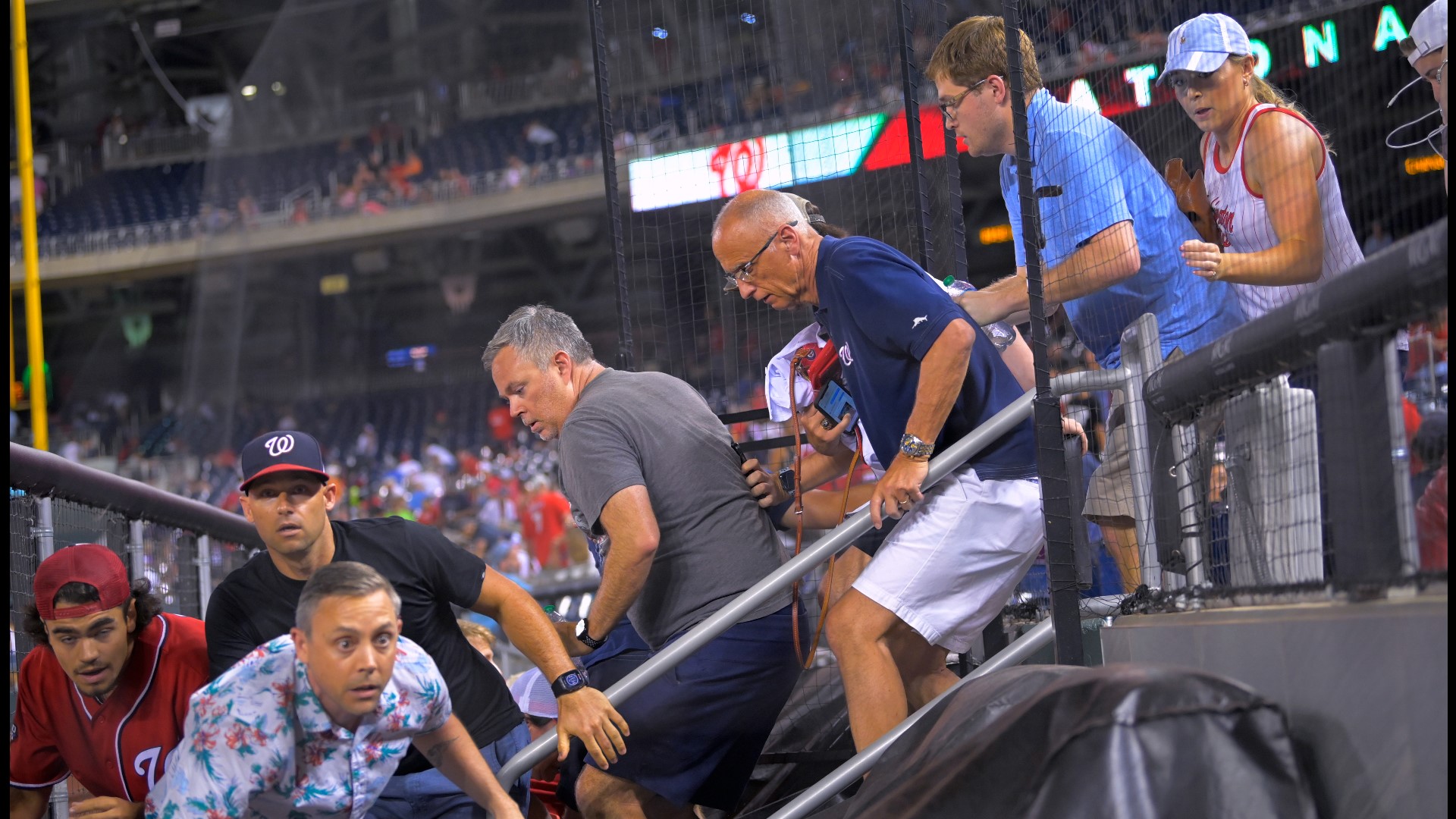 WASHINGTON — After shots rang out just outside the Washington Nationals Park, on the inside, fans’ fears quickly whipped into a frenzy, sending people running in all directions in search of safety from a perceived threat.

The incident that was soon determined to have been a shootout between two cars outside of the stadium left three people injured. D.C. police said two victims were in one of the cars and the third victim was a woman who had been attending the game and was caught in the crossfire. She’s expected to recover, Executive Assistant Chief of Police Ashan Benedict announced.

The moment that the gunshots began ringing out is a moment the masses in attendance at Saturday night’s game won’t likely soon forget.

Cali Hackett was watching the game alongside her father, sitting right under the jumbotron screen when she heard the sound of “loud bangs.”

At first, she thought that maybe the sounds were fireworks.

“I didn't really think much of it. Maybe, you know, they were testing [fireworks], or someone accidentally shot one off — but not until a couple seconds later, were people starting to duck and run and the players were being rushed off the field,” Hackett said.

She said that it took about 10 minutes before a voice came over the PA system, informing fans that the threat was outside of the stadium and it was safer to stay inside.

“There were people around us who were like, ‘Let's go, we're getting out of here.’ Not sure where they went. But people were rushing towards the exit.”

Stacy Ng and her son Tyler bought last-minute tickets to the game. She says it was a great night seeing Ryan Zimmerman hit a home run. Then they heard three gunshots, and that's when she says people started to panic.

"You see people at home base starting to run. We’re still sitting there trying to figure it out and then people to the right of my section and the players exited," said Ng.

The two were sitting just six rows from the dugout, so Ng grabbed her son and they made their way to the dugout with other fans.

"I just needed to find the safest place possible to have my son lay down. He has little scratches on his knees because I had him down on the ground. I told him when I say lay down fully, you lay down and I’m going to lay on top of you. You just want to keep your child safe and you’re going to do whatever you have to do," she said.

Ng tells WUSA9 that for several minutes they had no idea where the shots came from. Eventually, they heard the announcement over the loudspeakers that the shooting happened outside the ballpark, and they were able to get out of the stadium safely.

Ben Comeau, a fan in the stands from Loudoun County, Virginia, saw the panic first hand as people made a mad dash out of the stadium after hearing the bangs.

"People were holding hands, locking arms - people were desperate to get out of there," he said.

It was difficult to know what to do in the moment, Hackett remembered, especially when it became apparent that the sounds they heard were much more sinister than fireworks.

Hope everyone is safe at Nationals park. I heard a few loud bangs and then a mass exodus. View from my roof pic.twitter.com/MA1B7z83u2

“There were so many thoughts going through my head like, what should we do? Should we go? Should we stay? There were people yelling all these sorts of things, like, ‘Take cover!’ . . . all of it, very scary.”

Although the experience did shake her, Hackett said she’s been to many Nats games in the past and she doesn’t think Saturday night’s experience will stop her from going to another; she plans to head out to the rescheduled game on Sunday.