ATLANTA — The Atlanta Braves are in the thick of their season and hope to be playing baseball in October as they battle for a World Series.

But, come December, SunTrust Park will have a whole different look. One that includes snow.

Don't panic and run to the store for bread and milk, though.

A 15-story tall steel scaffold jump structure - consisting of up to 29,000 unique pieces - will then be covered with up to 800 tons of snow and transform the ballpark.

Why? The world’s best freeskiers and snowboarders are coming to town.

In partnership with the Atlanta Braves, U.S. Ski & Snowboard will host the Visa Big Air Presented by Land Rover at SunTrust Park Dec. 20-21. The event will be sanctioned as a FIS Snowboard and Freeski World Cup and will offer elite international men’s and women’s big air competition.

RELATED: Here's how it looked when Boston did it at Fenway Park

Organizers say Atlanta is an optimal first site for the Visa Big Air series, as it is an iconic sports city with great Olympic history.

The event is part of a multi-year commitment by U.S. Ski & Snowboard to bring big air events to the masses in unique environments by hosting one city big air event per season leading into the Olympic Winter Games Beijing 2022.

“We are proud to showcase SunTrust Park to a global audience as the host of this world cup ski and snowboard event,” said Derek Schiller, Atlanta Braves President and CEO. 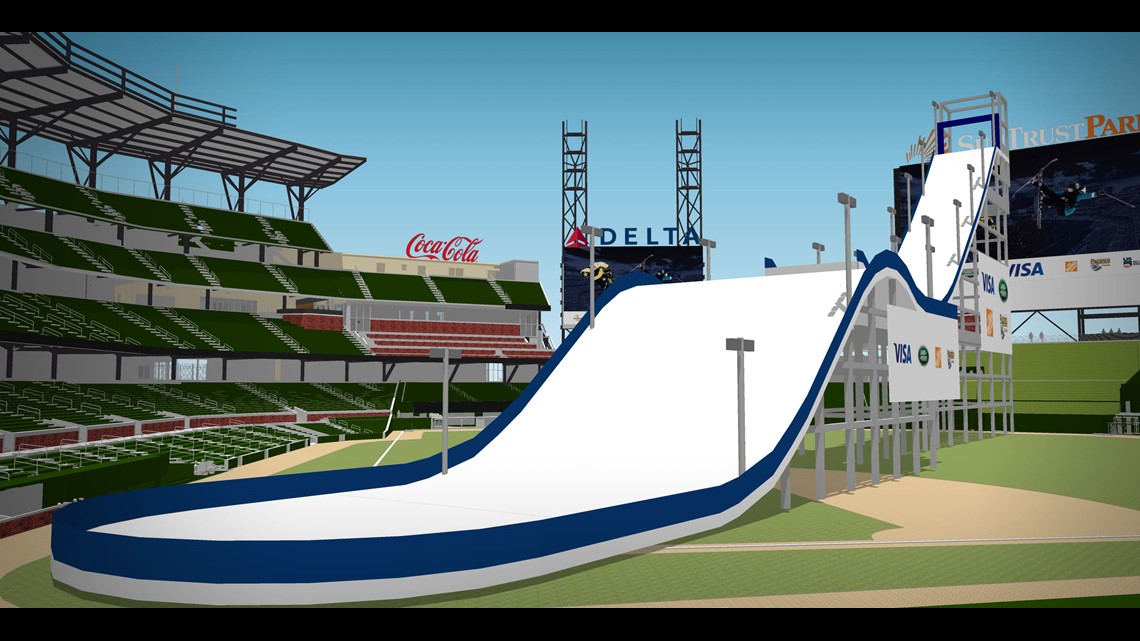 “It’s our privilege to host these world-class athletes,” Schiller added.

Big air competition has been a critical part of snowboarding’s progression since the start of organized competitions.

Air + Style, one of the first major big air events, started in 1994 and Big Air has also been part of the Winter X Games program since the event was founded in 1997.

Snowboard big air made its Olympic debut at the Olympic Games PyeongChang 2018, where U.S. Snowboard Team’s own Kyle Mack and Jamie Anderson walked away with silver medals at the inaugural event.

On the heels of snowboard big air’s debut in PyeongChang, freeskiers will make their first Olympic big air appearance at the Olympic Games Beijing 2022.

“The Visa Big Air at SunTrust Park will bring our sports out of the mountains and to the people in a major metropolitan area,” said U.S. Ski & Snowboard President and CEO Tiger Shaw.

The event will be the first of its kind to come to Atlanta. Event organizers expect to bring a taste of the mountains and Olympic winter competition to 20,000 fans for each of the two days of competition.

Tickets go on sale Friday, Sept. 6 at 12:00 p.m. For more information on tickets and the event, go to braves.com/visabigair.