Heupel will be the 27th head coach of the Tennessee football program, the University announced Wednesday. 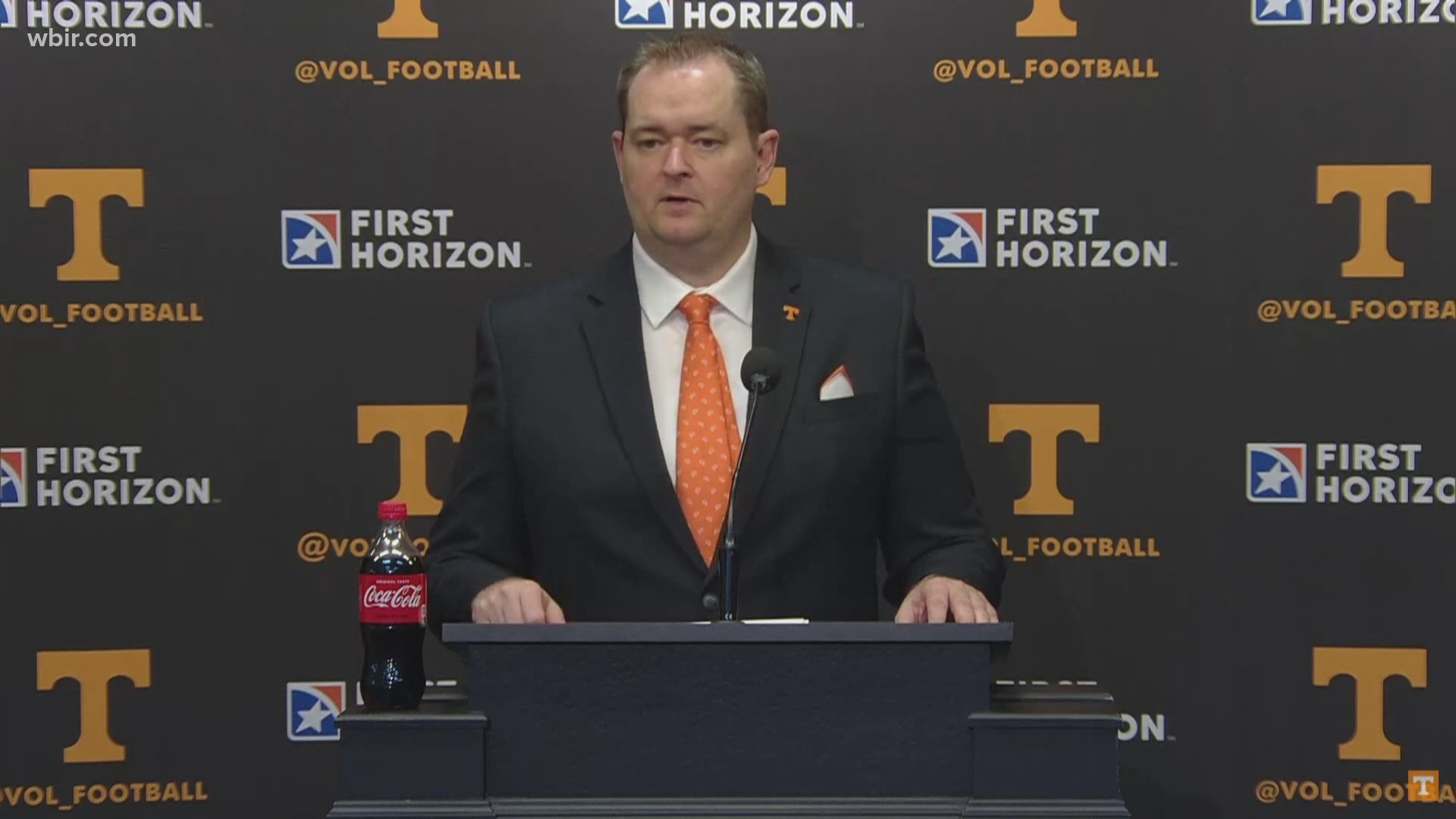 KNOXVILLE, Tenn — University of Central Florida coach Josh Heupel, 42,  is following his former director of athletics Danny White to Knoxville. Heupel will be the 27th head coach of the Tennessee football program, the university announced Wednesday.

That distinction was recognized as White presented Heupel with a Tennesee jersey with the number 27 on it.

Heupel will replace former Tennessee head football coach Jeremy Pruitt, who was fired for cause on Jan. 18 after Chancellor Donde Plowman said a compliance investigation revealed possible Level I and Level II NCAA violations. The investigation, according to the University, is still ongoing.

According to the Memorandum of Understanding, UT will pay Heupel $4 million annually, a $275,000 base salary plus $3.725 million in supplemental compensation. The original contract will be for six years, through 2027, but could be automatically extended by a year based on possible NCAA sanctions.

Heupel, along with his wife Dawn and kids Hannah and Jace, arrived in Knoxville at noon.

"What an awesome day for myself and my family," he said first. "We're excited to be part of the Vol family."

Heupel said his main goal was mentoring and teaching his football players, both on and off the field, and winning championships.

He said he and White were aligned on their intention to focus first on the student-athletes, to help make them the best both on and off the field. It starts with them.

White said when he asked the players what they wanted in a head coach, they told him they wanted someone with confidence, juice, and swagger.

He wanted someone with integrity and character, and while White said he did an exhaustive search, it came back to the guy he'd worked with the last three years at UCF.

"I tried my best not to hire him," he said, but Heupel was the right guy for a lot of reasons. He said he cares deeply for his players and thinks the fans will like the "pretty fun brand" of football Heupel liked to play.

RELATED: What about...? Answering key questions now that UT has a new head football coach

Heupel said it's all about connection and family.

"A sense of connection allows you to chase greatness," he said. "When you have love, you can sacrifice for your teammates."

He said it was important to feel that connection, as a family, to succeed. That was also his message to current team members, especially those who had already entered the transfer portal, and to new recruits.

"Trust us. You chose this university for the right reasons," he said. "Let's stay a family."

Heupel knows there is a challenge ahead. A looming NCAA investigation into violations will likely mean penalties. The fan base is frustrated and vocal. The winning tradition at Tennessee is almost forgotten.

But that doesn't deter him. He called it a minor speed bump and said the university will recover quickly.

"To the kids in the program right now and being recruited, you will have the opportunity to play and chase championships now."

Both Heupel and White said they want to build a foundation of long-term success, but that doesn't mean they won't focus right now on winning games. That's another thing White said current players told him. They didn't want a guy that was focused on winning two or three years down the road. They want to win now.

On the field, Heupel is known for his offensive prowess and developing quarterbacks.

He said he wants to play with tempo and be the aggressor on offense, to be balanced on play calling and push the football down the field.

He said that will carry over to the defense as well. They have to be physical and control the line of scrimmage, focusing on creating negative plays.

"All the elements to win are here. It's the biggest show. You walk out in that stadium, there's a 100-plus thousand fans, the facilities are as good there are in the entire country. They get a world-class education," he said. "It's about putting people in the right place to reach young people."

On that gameday experience, Heupel has both played and coached in Neyland Stadium. He said thinking about running out to Rocky Top gave him chills.

He loves the passionate fan base, and hopes they will get behind the team and the vision, but be patient and positive. He said that will help with recruiting and building success.

He wants former players to be involved and said they are always welcome.

Meeting one of those VFLs is particularly exciting for his son, Jace, who climbed off the plane wearing a Power T baseball cap.

"I was texting with Peyton (Manning) already," Heupel said. "Jace is excited to catch a ball from him on the field."

Heupel sent a video message to the players this morning but will meet with all of them in person quickly. He said he will also meet with all the assistant coaches.

One of his first priorities is getting the right staff, and that could include current coaches along with those on his staff at UCF.

Signing day is a week from today, so recruiting will also be a quick, early focus for Heupel and his future staff.

White said he talked to a lot of great candidates over the last few days, but it just kept coming back that Heupel was the right person for the job.

"Josh Heupel, who I had the privilege of working with for three years, is everything we were looking for: winning with integrity, a history of championships and the architect of explosive offenses. He is a players' coach and the kind of person the student-athletes go the extra mile for. I saw that first-hand, and you can see it in his coaching record," White said.

"I am thrilled to be coming to Tennessee," Heupel said. "I understand that Volunteer fans are hungry for a return to the top that they so richly deserve, and it is my goal and commitment to bring a championship back to Rocky Top."

Welcome Josh. We are looking forward to great things happening under your leadership. A Big Orange welcome to you and your family to Knoxville and Rocky Top! Go Vols! https://t.co/91yWTyx1Z5

In year one, Heupel and the Knights went 12-1, winning the American Athletic Conference but falling to LSU in the Fiesta Bowl, 40-32. Heupel was the third coach to ever lead his team to an undefeated regular season his first year.

In 2015, Heupel worked as an assistant head coach, offensive coordinator, and quarterback coach for Utah State. The Aggies finished with the No. 93 offense in the country.

Heupel worked as the offensive coordinator at Oklahoma from 2011-2014 with all but one of his offenses finishing in the top 25 for total yards.

Heupel walks into a difficult position with the Vols with more than 20 players entering the transfer portal this season, including several key contributors.

Should Heupel decide to retain any of the current coaching staff, there are still positions to fill at both offensive and defensive line as well as inside and outside linebacker.