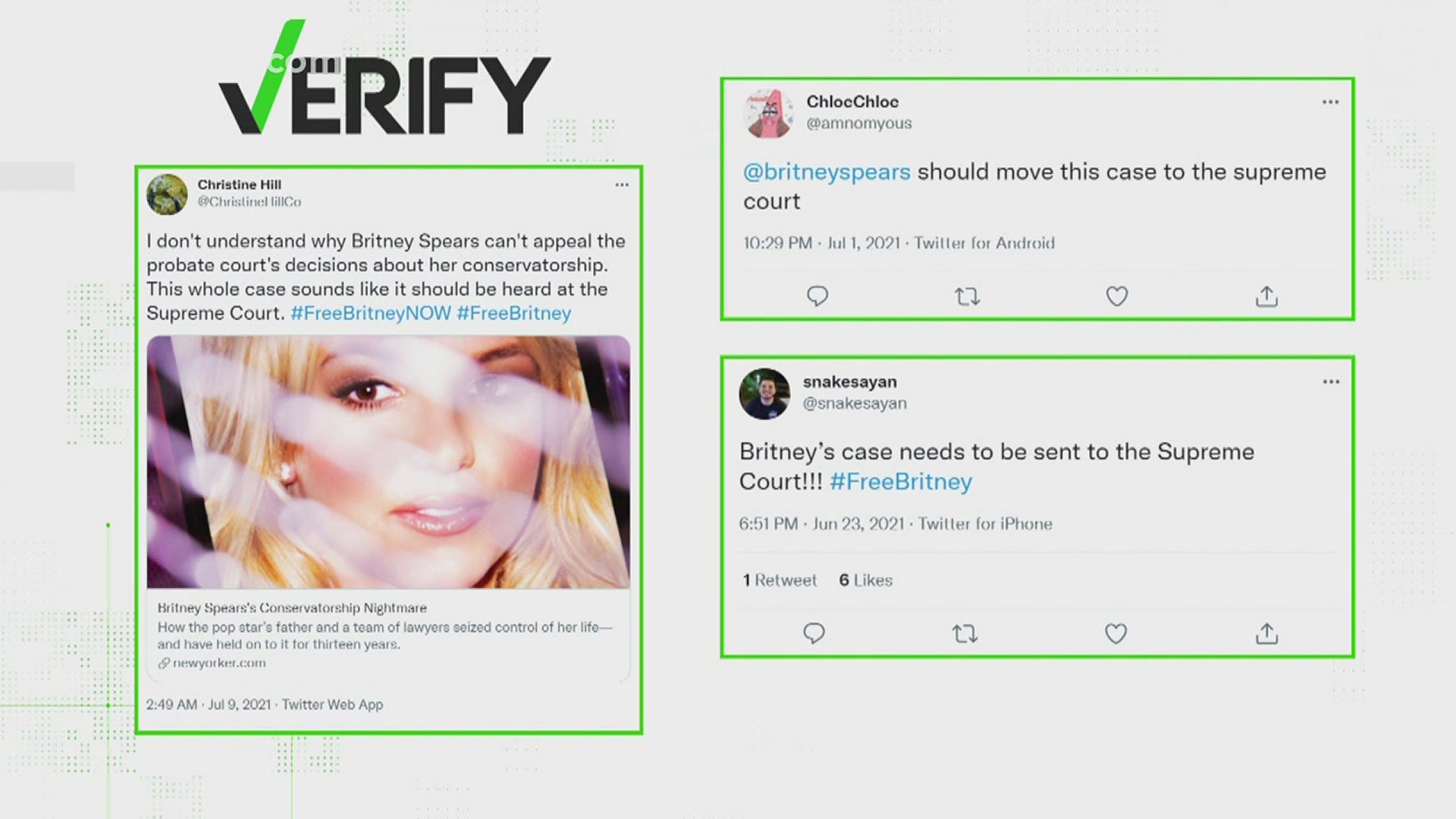 Story from The Conversation by Naomi Cahn, Professor of Law, University of Virginia

“I’m here to get rid of my dad and charge him with conservatorship abuse,” Britney Spears told a California court on July 14, 2021. She said that he was ruining her life, and in previous testimony she claimed that a team led by her father controlled her schedule, prevented her from having another baby and bullied her.

She may soon get her wish after the judge in the case said she could hire her own lawyer, former prosecutor Mathew Rosengart, who plans to file paperwork soon to end the conservatorship on her behalf. To terminate a conservatorship, California law simply requires the filing of a petition demonstrating that it is no longer required.

No one has filed this paperwork yet, according to the latest media reports

Spears’ case is unusual: Conservatorships are typically not imposed on someone who doesn’t have severe cognitive impairments, and Spears has toured the world, released four albums and earned US$131 million, all while deemed legally unfit to manage her finances or her own body.

But it does illustrate how easily conservatorships can be abused – which is one reason some members of Congress are considering ways to reform the state-run system.

What is a conservatorship?

I teach about conservatorships in my course on aging and law and have written extensively about the parent-child relationship.

Conservatorships are legal arrangements that give a third party control over someone else. They can be imposed only by a court, and only a court can terminate them. The person put in charge of the person’s affairs is called the conservator, or the guardian in some states.

Conservatorships have been around for centuries and are critical legal mechanisms to help people – often [older persons with neurocognitive disorders] – who are considered unable to care for themselves or their finances.

Conservators are subject to court oversight and are typically required to submit annual reports to the court. And California law – which is similar to the rules in most states – requires the court to monitor each conservatorship to protect against abuse and ensure that the conservator is acting in the best interests of the subject.

Jamie Spears has been a conservator for his daughter since he was appointed to this role by a California court in 2008 and has reportedly received at least $5 million in fees.

On Aug. 12, 2021, he filed paperwork that indicated his willingness to step aside. Spears has not provided, however, any timeline for ending his role. He is also demanding about $2 million in new compensation from his daughter’s estate for legal and public relations costs, which could delay this transition.

In late July 2021, Spears’ new lawyer requested that the court appoint accountant Jason Rubin as the new conservator of the estate. A hearing on that request is scheduled for Dec. 13, 2021.

While the standard in many states is to impose the fewest restrictions so the person retains the most rights possible, the powers of a conservator can be broad. And the person subject to one may lose the right to marry, make a will, vote or consent to medical treatment.

And imposing a conservatorship is not supposed to be easy. California requires “clear and convincing evidence” that one is necessary. The law also states that the individual has the right to be represented. The one imposed on Spears, however, was done quickly.

Broad powers and “anemic” oversight make conservatorships subject to multiple forms of abuse, ranging from the imposition of unnecessary restrictions on the individual to financial mismanagement. Nothing can be done if no one finds out about the abuse.

A 2010 U.S. government report identified hundreds of allegations of physical abuse, neglect and financial impropriety by conservators. Most of them related to financial exploitation, and that, in turn, often meant that the victim’s family was affected, losing not just expected inheritances but also contact with the person subject to the conservatorship.

A 2017 New Yorker article on abusive guardians highlighted the case of April Parks, who was sentenced to up to 40 years in prison for financial conduct related to numerous conservatorships she handled. She was also ordered to pay more than half a million dollars to her victims.

But beyond these anecdotes, no one even knows the magnitude of the problem. That’s because conservatorships are subject to state law, and each state handles the imposition of them as well as data collection differently. And a 2018 Senate report found that most states are unable to report accurate data on conservatorships.

The National Center for State Courts estimated in 2016 that 1.3 million adults in the U.S. are subject to some kind of conservatorship – representing about $50 billion in assets – but a previous report suggested the number of cases could be more than double that.

There’s virtually no data on how often conservators misuse their power or when a conservatorship has been improperly imposed.

‘Free Britney’ may lead to reforms

However, this may begin to change, thanks to growing publicity of the issue.

Last year’s Netflix movie “I Care a Lot” told the story of a fictionalized abusive guardian played by Rosamund Pike, who won best actress at the Golden Globe for the role. And a 2020 episode of the investigative series “Dirty Money” profiled what it alleged was guardian abuse by several lawyers, including one who subsequently filed a lawsuit claiming defamation.

And in February 2021, The New York Times aired “Framing Britney Spears,” which documented her “yearslong struggle under” the conservatorship. Times reporters also exposed confidential court records that showed Britney Spears has been unhappy with her father since at least 2014. A court investigator in 2016, for example, wrote that the conservatorship “had become an oppressive and controlling tool against her.”

Now, members of Congress as ideologically opposed as Texas Sen. Ted Cruz and Massachusetts Sen. Elizabeth Warren have joined the “Free Britney” cause and are pushing for conservatorship reforms and more data on the legal arrangements.

While states have made some improvements, such as urging more automony for conservatees and less restrictive alternatives to conservatorships, reform advocates such as Syracuse law professor Nina Kohn say more is needed to protect the rights of individuals and prevent abuse, including stronger oversight.

Spears may soon find herself free of her conservatorship. Regardless, her situation has already put a spotlight on the potential for abuse – and it may lead to a better system for those who genuinely need the assistance.

This article is from The Conversation, an independent, not-for-profit news organization dedicated to spreading ideas from experts. Republished under a Creative Commons license.