The decision comes roughly one week after 11Alive spoke with a couple who said a truck driver refused to provide insurance information and eventually left the scene. 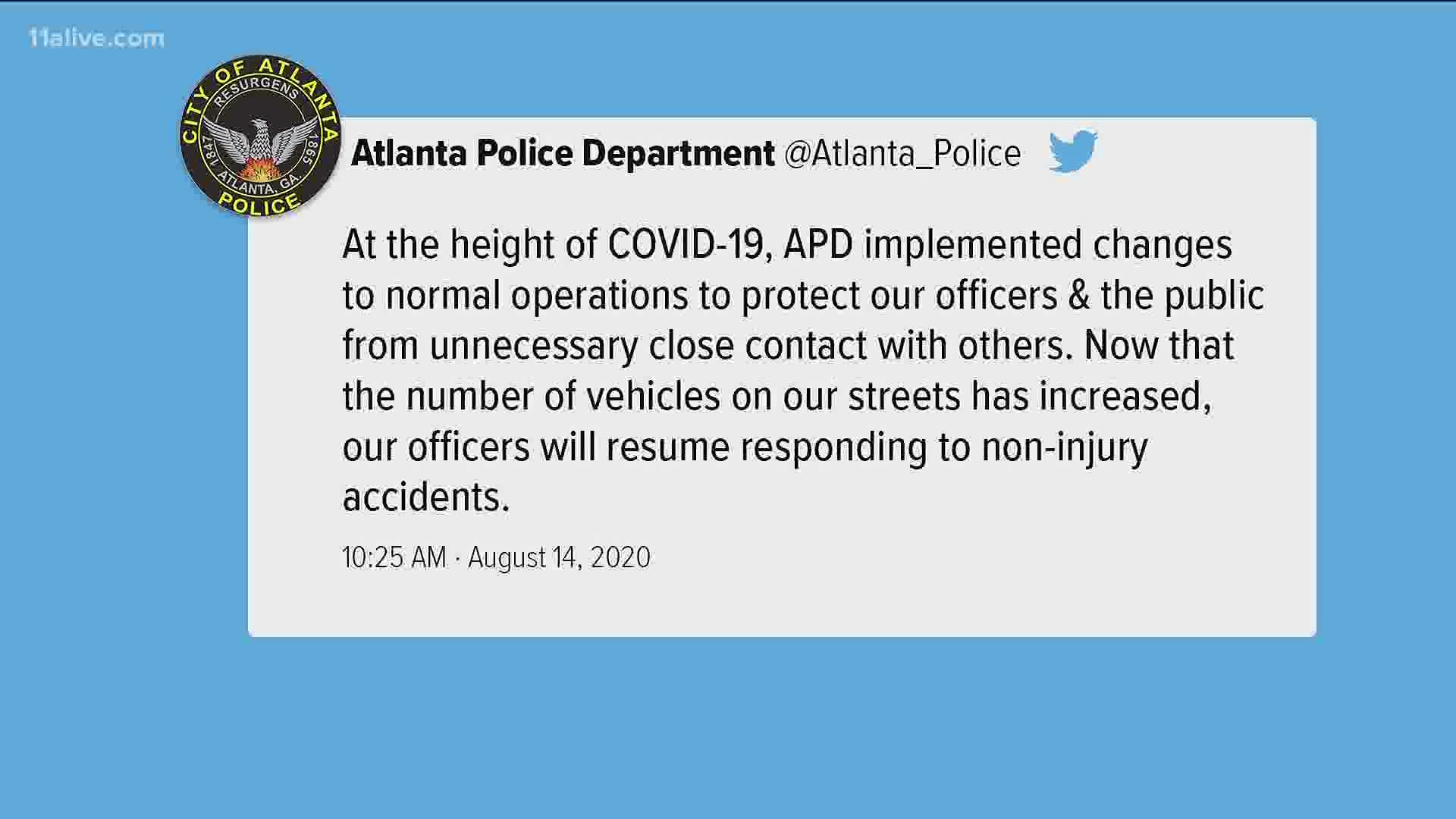 ATLANTA — For most of the late spring and summer, there was a good chance that a fender bender on Atlanta's roads would likely be handled between drivers rather than with an officer.

Since March, Atlanta Police have had a policy for crashes where they usually wouldn't show up for the ones where no one was injured. The goal was to lower the risk of officers or motorists spreading COVID-19.

Authorities announced on Friday, however, that they would be going back to a modified version of their original policy.

"During that time, the number of motorists on the roads mainly consisted of essential employees and first-responders," Atlanta Police announced on Nextdoor. "Now that the number of vehicles on our streets and roadways has increased, our officers will resume normal operations as it relates to responding to non-injury accidents."

Atlanta Police, in their message, described March as the "height" of the pandemic, though numbers suggest an increase in recent months as well. As such, officers will still be working to adhere to the Centers for Disease Control and Prevention guidelines, and wearing personal protective gear, gloves, and other items while attempting to maintain their distance.

At the height of COVID-19, APD implemented changes to normal operations to protect our officers & the public from unnecessary close contact with others. Now that the number of vehicles on our streets has increased, our officers will resume responding to non-injury accidents. pic.twitter.com/1CtgGbMaaH

While the policy was meant to be temporary and, like many changes around metro Atlanta was the result of COVID-19, not everyone was happy with it - among them being some drivers.

One couple told 11Alive's La'Tasha Givens just a week earlier that the decision turned into a nightmare when they were involved in an accident with a tractor-trailer.

Derreck and Octavia Roberts said the accident happened near the intersection of Browns Mill Road and Southside Industrial Boulevard. Derreck recounted how he called the police and started recording on his phone. Octavia was attempting to get insurance information from the truck driver but he allegedly refused to provide it.

Derreck said he called police again asking for an officer and was asked if anyone was hurt. Fortunately, his injuries appeared to be a swollen knee and a sore back. But because there were no serious injuries, an officer didn't arrive for three hours.

By then, the other driver had left the scene. Derreck suggested that one problem with the policy was that it left drivers in a dangerous situation where emotions would be running high.

"Both parties are going to be upset, and if there is nobody to referee the situation or official the situation, it can get ugly," he said.