Illegal I-85 skate park demolished over 'safety and environmental concerns'

It was never supposed to be there. 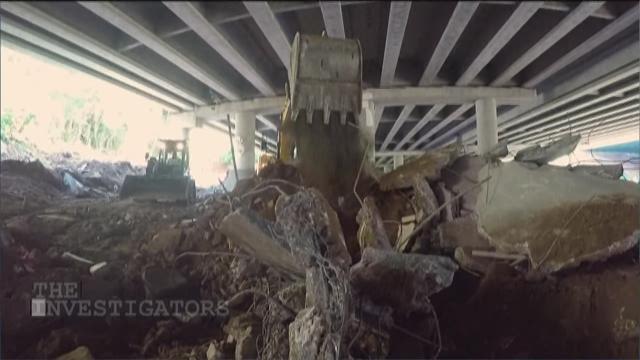 ATLANTA – Skaters who were trying to work with the state to save their secret skate park were taken by surprise, Wednesday, after the demolition crews suddenly started tearing it apart.

“What good does it do to tear it down,” Q. McDowell, a skater in Atlanta asked.

Four months after the 11Alive Investigators discovered the park that was illegally built under Interstate 85, about a football field from where it collapsed in March, crews were at the site with bulldozers, breaking the hearts of skaters who hoped to save it.

“It feels like my heart has been ripped out of my chest and shredded apart into a zillion pieces," said Pat McLain, the creator of the skate park. "This is 10 years of labor being ripped up in one single day."

PREVIOUS | A secret skate park was built under Interstate 85, just yards from the collapse

Since April, McLain said he's been trying to keep it alive by applying for permits and working with the Georgia Department of Transportation. So it came as a surprise when McLain got a text at 7 a.m. on July 12 from a friend telling him crews were tearing it down.

“The fact that I had to get a text at 7 a.m. from a homeless individual who’s still living down here shows the negligence, the unprofessionalism between all of these departments," McLain told 11Alive.

GDOT spokesperson Natalie Dale admitted that they didn't notify McLain of the demolition ahead of time, but in a statement to 11Alive’s Andy Periotti, GDOT said, “Due to the insurmountable safety and environmental concerns ... the Department has determined that the skateboard facility cannot remain and a permit cannot be issued for this facility."

PHOTOS | Hidden skate park under I-85 shut down by GDOT

Hidden skate park under I-85 shut down by GDOT

GDOT also points out, there is no public access to the park. This would make it difficult for emergency vehicles to access. Plus, it’s built along a creek, which creates an environmental problem.

Photos taken of the skate park, provided to 11Alive, showed pallets of concrete mix sitting under tarps, stacks of plywood laying about and other construction materials strewn under a section of the Atlanta highway. But 11Alive found more materials under the bridge, even flammable ones, including tires and old mattresses.

PHOTOS | Hidden skate park under I-85

PHOTOS: Hidden skate park under I-85

11Alive discovered the park shortly after I-85’s fiery collapse, less than a football field away. Investigators said the fire began after a suspect sparked a fire inside the storage area where noncombustible, but highly-flammable materials were kept.

GDOT came under fire for storing the materials, said to be a high density plastic conduit (or HDPE), under the bridge. GDOT Commissioner Russell McMurry said storing the material under bridges is something the agency does frequently, but they never anticipated it would be set on fire, causing this kind of catastrophe.

“If that never would have happened, that place would still be there...and nobody would ever know anything about it,” McDowell said.

It is unknown how long and how much it took to create the finished product seen in the pictures, but it appears that the section of the bridge was last inspected in 2015. Cleanup of the park began just days after our story ran.

MORE | Secret skate park under I-85 stayed unnoticed, but not unknown

When Pierrotti reached out to GDOT spokesperson Natalie Dale back in March, she said the park was not sanctioned or approved by state officials in any way. 11Alive also asked why the state did not notice that park was being built, she told us the agency noticed the movement through word of mouth in the past.

“It went up the chain, it just didn’t get properly noticed,” Dale said.

GDOT says it is now doing a better job at inspecting under its bridges to prevent this from happening again. The skaters will not face any fines.

“My heart goes out to them because they did spend a lot of time. If we could have permitted it, we would have,” Dale said.

11Alive asked GDOT for the taxpayer cost to tear it down, but it couldn’t provide us an estimated amount.

With the park's demolition, McLain said it's left a hole in the skating community. GDOT offered an alternative to it, pointing to a properly permitted skate park located right off the Beltline, less than five miles away.

But for McLain, the one under I-85 was much more meaningful. “This park is the entire heart of the skateboarding scene in Atlanta. And if anyone tells you otherwise, they’re probably lying to themselves.”

It's left him and others mourning the death of a park, skaters couldn’t save because they asked for forgiveness instead of permission.