In one week, four people hit while crossing major interstates

Police said it is never a good idea to attempt to cross an interstate or get out of your car on an interstate. 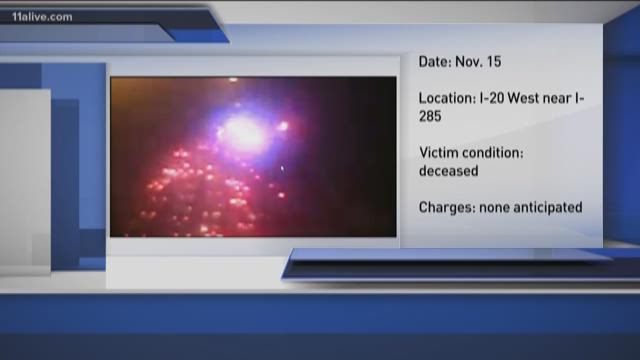 ATLANTA – In one week, four people have been hit while trying to cross a major interstate in Atlanta. Of the four, only one has survived.

In a statement, the Atlanta Police Department said that federal interstates are very dangerous for pedestrians and unfortunately, due to the high rate of speed most vehicles are traveling, pedestrians often do not survive injuries sustained when hit.

The first accident happened late Nov. 10 when Georgia Tech student Kaden Campbell, 19, was fatally hit by an SUV while walking across the southbound lanes I-85 at I-75 northbound, near Georgia Tech's campus. No charges are anticipated, but police said the investigation is continuing.

RELATED | Parents of Tech student killed on I-85: It's 'unfathomable' he is gone

The second incident occurred late Nov. 14 when a woman was found unconscious after being hit by, what police said, may have been three cars off the Connector. According to Atlanta Fire Department, the woman was near the University Avenue exit off I-85 South when she was hit while trying to cross from the shoulder to northbound lanes.

Emergency responders said she was breathing when they transported her to Grady Hospital, but she was reportedly not alert.

RELATED | Man dies after being struck by vehicle on I-20

Just six hours later, another man was hit at I-20 West at the Joseph E Lowery off ramp. The driver who hit the man told police he did not see the victim and only felt the impact from the crash. He said the man appeared to have climbed over the median wall from the eastbound lanes and proceeded to run across the westbound lanes.

Neither men have been identified by the Fulton County Medical Examiner.

Atlanta police said they see homeless individuals who set up encampments along the interstate. Sometimes they might use the median to cross the interstate to get to and from the encampment.

The department believes three of the most recent victims hit on interstates may have been homeless individuals. APD said they partner with the City of Atlanta to work together to help homeless individuals find assistance in getting the resources they need to get off the streets in an effort to reduce these types of incidents.