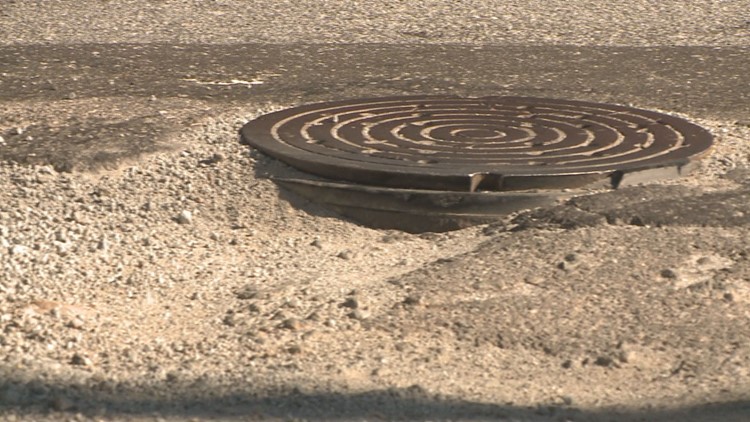 Photo by: WXIA
At least 6 drivers have popped tires on this manhole covering Spring St. NW and North Ave NW. near the Fox Theatre.

ATLANTA — Cadillac, BMW, Mercedes and Ford – no matter the model, they seem no match for a manhole covering in Atlanta’s Midtown neighborhood that has destroyed the tires on several cars.

Atlanta Police were dispatched to a vandalism call on Dec. 22 at Spring St. NW and North Ave NW. near the Fox Theatre, where six vehicles were stopped along the side of the road. One of the drivers told police that the cover of a manhole was sticking out of the street, causing several cars to get flat tires.

At least 6 drivers have popped tires on this manhole covering Spring St. NW and North Ave NW. near the Fox Theatre.
WXIA

Sean McCoy said he was leaving the gym that night and headed to a friend's house when he hit the manhole and busted two tires, rims and the frame of his vehicle. He said that he has already replaced two of the tires and his insurance will cover the damage -- but he has to pay a $1,000 deductible out of pocket.

"Somebody has to be responsible for this. I'm on a fixed income. I have a Mercedes Benz and that's very expensive and I can't pay out of pocket at this point," McCoy said. "The city is responsible for that. They have to pay for the damages to my vehicle."

After his tires went flat, McCoy said he pulled into a nearby parking lot and saw 10 other cars there with tire damage as well -- along with AAA crews and two tow trucks.

"They're over there making money off this. There is a lot of construction right there and they know there's a problem," McCoy said.

Officers observed that a portion of the street is being worn off, due to building construction in the area, according to the Atlanta Police report. A fence gate set up by the construction company was set up, but fell short of covering the manhole.

"While I was getting my tire replaced, there was another car at the light and you could hear it -- his tire busted. AAA started changing his tire right there," McCoy said. "They're making money off that."

McCoy said he was given a claim number and has to file documents with the city to pay for the damage.

"Just be aware of all these potholes around the city of Atlanta -- but it's a lot," McCoy said.