Hurricane season forecast released | Here's how many storms to expect

Colorado State University's forecast calls for a more active season in the Atlantic, including more hurricanes 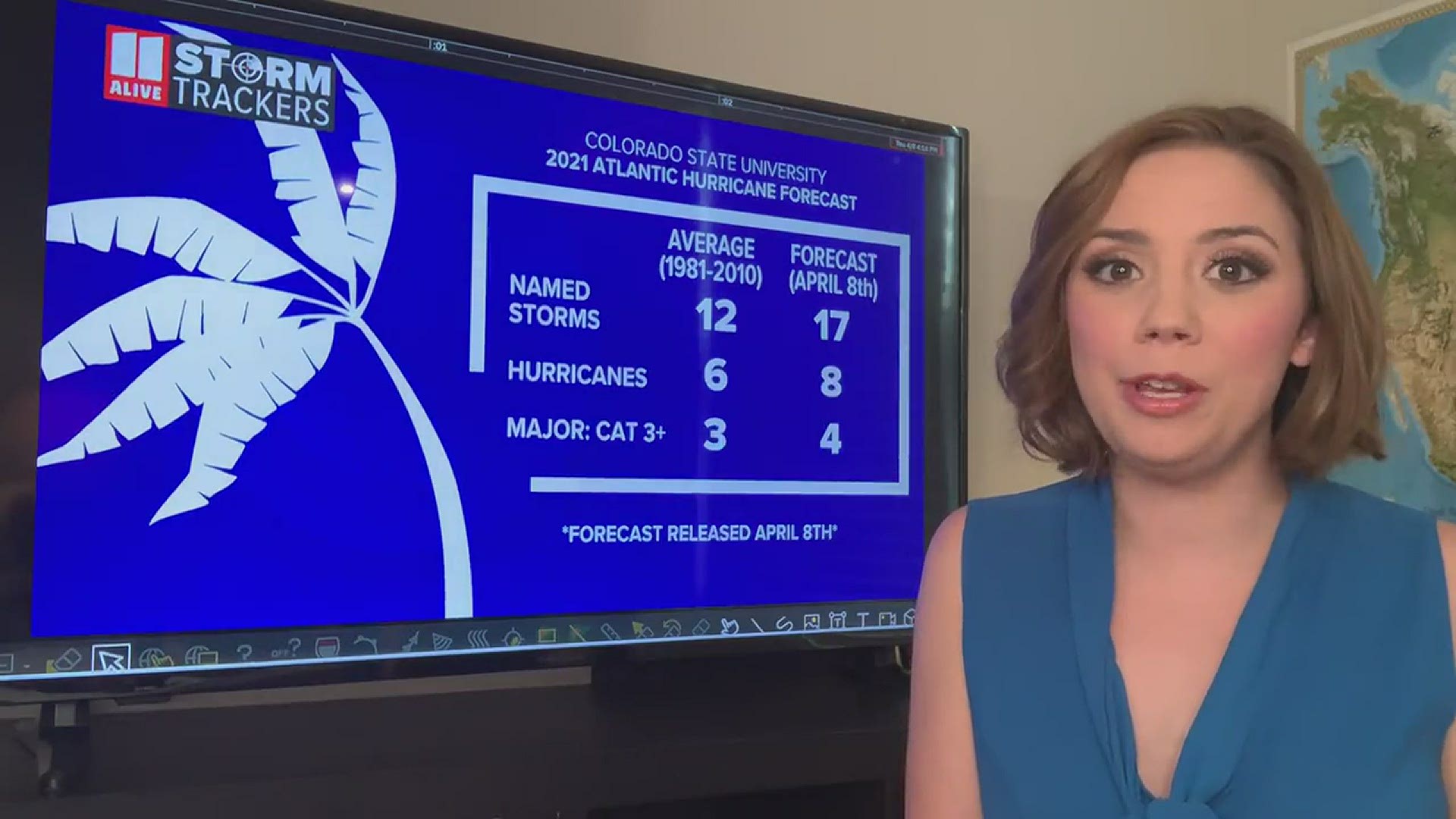 ATLANTA — Buckle up, this summer could once again prove to be a bumpy ride in the Atlantic. Hurricane experts from Colorado State University are predicting an above-average Atlantic season.

The forecast was released by Dr. Philip Klotzbach Thursday during the National Tropical Weather Conference. The initial Colorado State University forecast for the 2021 season includes 17 named storms, eight of which being hurricanes and four major hurricanes.

The average for the Atlantic Basin season is 12.1 named storms, 6.4 hurricanes and 2.7 major hurricanes. This is based on 30 years of data.

Although they forecast an active season with a greater number of named storms than average, it's much more difficult to predict where any of these will be and how many will make landfall in the United States.

On the East Coast of the U.S., which includes coastal Georgia, the team is calling for a 45 percent chance of a major hurricane landfall, compared to the average of a 3 in 10 chance.

Remember, it only takes one storm to make landfall near to you to make it a horrible tropical season. A perfect example of this is the 1992 Atlantic season. It was a pretty quiet start to the season until the first named storm, Andrew, in August. It significantly strengthened and slammed into south Florida as a Category 5 storm. It still remains one of the costliest hurricanes on record.

Climate Patterns Behind The Forecast

Klotzbach focused the discussion around the seasonal tropical outlook around a few different forecasting components including the El Niño Southern Oscillation  (ENSO), Atlantic ocean temperatures, and what may happen to large scale wind patterns to change ocean temperatures.

A primary driver for forecasting an upcoming Atlantic hurricane season is the presence or lack of an El Niño. For this, we look at the ocean surface temperatures over the Eastern Pacific Ocean near the equator. When they are cooler than normal, there is a La Niña. When they are warmer than normal, there is an El Niño. When neither is present, we call it a neutral phase of ENSO.

Presently, there are cooler than normal temperatures of the sea surface in this region of the globe, meaning we are in a La Niña.

Why does this matter?

Even though this may seem like a small change in water temperatures, it can play a big impact on our overall weather patterns in the Atlantic. When an El Niño is present, more wind shear limits hurricane development. With a La Niña, we end up with less wind shear and more rising motion over the tropical Atlantic. This would lead to more thunderstorm and tropical development in the Atlantic and more active season.

One of the reasons for the above-average seasonal #hurricane forecast from CSU is due to the likely lack of #ElNino this summer/fall. El Nino generally increases vertical wind shear in the Atlantic, tearing apart hurricanes. pic.twitter.com/MBiB8XN9Rg

For reference, we had the strongest La Niña in a decade last summer during the 2020 hurricane season, a large factor as to why we had a record 30 named storms.

Right now, the Climate Prediction Center predicts that an El Niño is overall not likely for the peak of hurricane season.

Looking Ahead to the 2021 Hurricane Season

The National Hurricane Center will be implementing a couple of changes this hurricane season. First, they'll now begin issuing regular tropical outlooks 2 weeks earlier starting May 15. Although the official start of the Atlantic Season isn't until June 1st, seven of the last 10 years have had named storms before the official start.

Also, there will be a new supplemental list of names to use if and when the primary list is exhausted. This was decided by the World Meteorological Organization earlier this year.

RELATED: Greek alphabet will no longer be used to name hurricanes, tropical systems

Although we're still a ways away from hurricane season, it's never too early to be prepared! Especially if you have homes near the Gulf or Atlantic, review your hurricane season supply kit.