We have a flash flood watch in effect until Thursday. 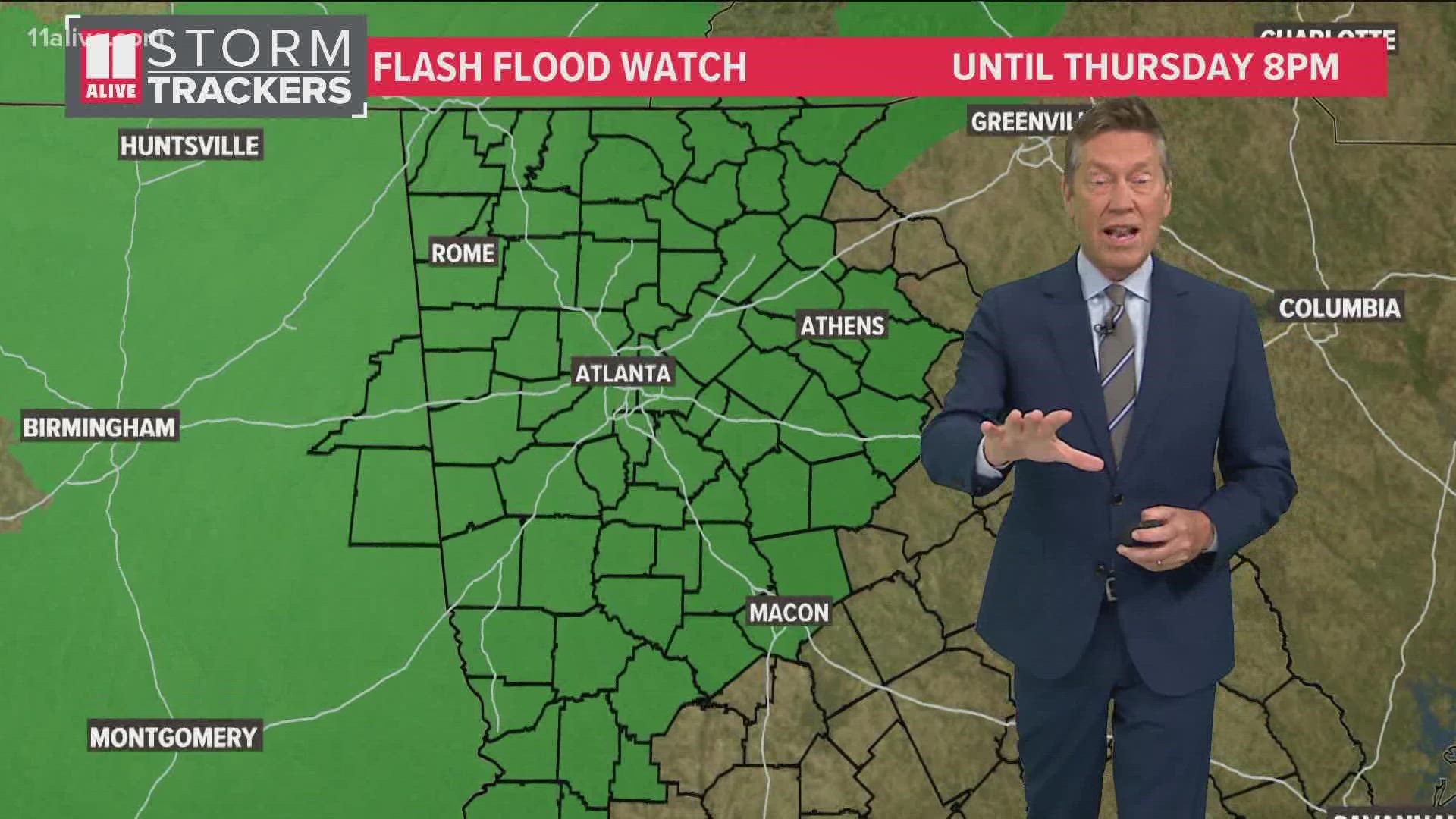 ATLANTA — The rain continued Wednesday as rounds, heavy at times, pushed through the area. We have a flash flood watch in effect until Thursday and some parts of Georgia are now in a flood warning.

There was a chance for a few embedded thunderstorms, and an isolated strong to severe storm. Flooding was the main threat with the ground already saturated. Gusty winds were also expected to accompany a few of the storms.

See the updates below from Wednesday and click here for a live interactive radar.

10:23 p.m. | The National Weather Service has dropped many of the counties listed in the tornado watch for west Georgia.

NWS drops most counties from the tornado watch in west Georgia. The only counties still in the watch are Catoosa, Dade and Walker. It will expire for those counties at 11pm, which is in less than 45 minutes. pic.twitter.com/mGoOoXbpZ0

7:23 p.m. | 11Alive viewer Carol Carmichael sent in this photo of the clouds over Carrolton Wednesday evening.

6:15 p.m.  | A Flash Flood Warning has been issued for Jasper and Putnam counties until 9 p.m.

4:05 p.m.  |  Tornado watch issued for parts of North Georgia until 10 p.m. The counties highlighted below are on the watch currently.

A Tornado Watch has been issued for the area highlighted until 10/06 10:00PM. Track storms now: https://t.co/bPJJb0bfYZ #storm11 #gawx pic.twitter.com/7eAZYjC6nW

3:55 p.m. | Tornado watch issued for Northwestern Georgia until 11 p.m. Stay aware of forthcoming warnings. The counties highlighted below are on the watch currently.

A Tornado Watch has been issued for the area highlighted until 10/06 11:00PM. Track storms now: https://t.co/bPJJb0sQQx #storm11 #gawx pic.twitter.com/MxVh0LeKf1

The Flash Flood Watch was extended until 8pm Thursday. The ground is saturated and additional rounds of showers/storms could lead to flash flooding. #gawx pic.twitter.com/cOgHcfXAk7

3 p.m. | Several roads in Putnam County are closed due to flooding. Currently, these are the impacted roads:

Public Works officials in Putnam County said you can call them at 706-485-8817 for any other major areas flooding.

🛑⚠️ ‼️Citizens of Putnam please see the following roads that are closed due to Flooding. Please take precautions and...

2:45 p.m. | A tornado warning in Monroe county has expired. More showers and storms continue around metro Atlanta with pockets of moderate and heavy rain in North Georgia.