Denver could break a record Sunday afternoon as highs soar into the upper 90s. The current record is 98 degrees, last set in 2012. Stay cool, Colorado! 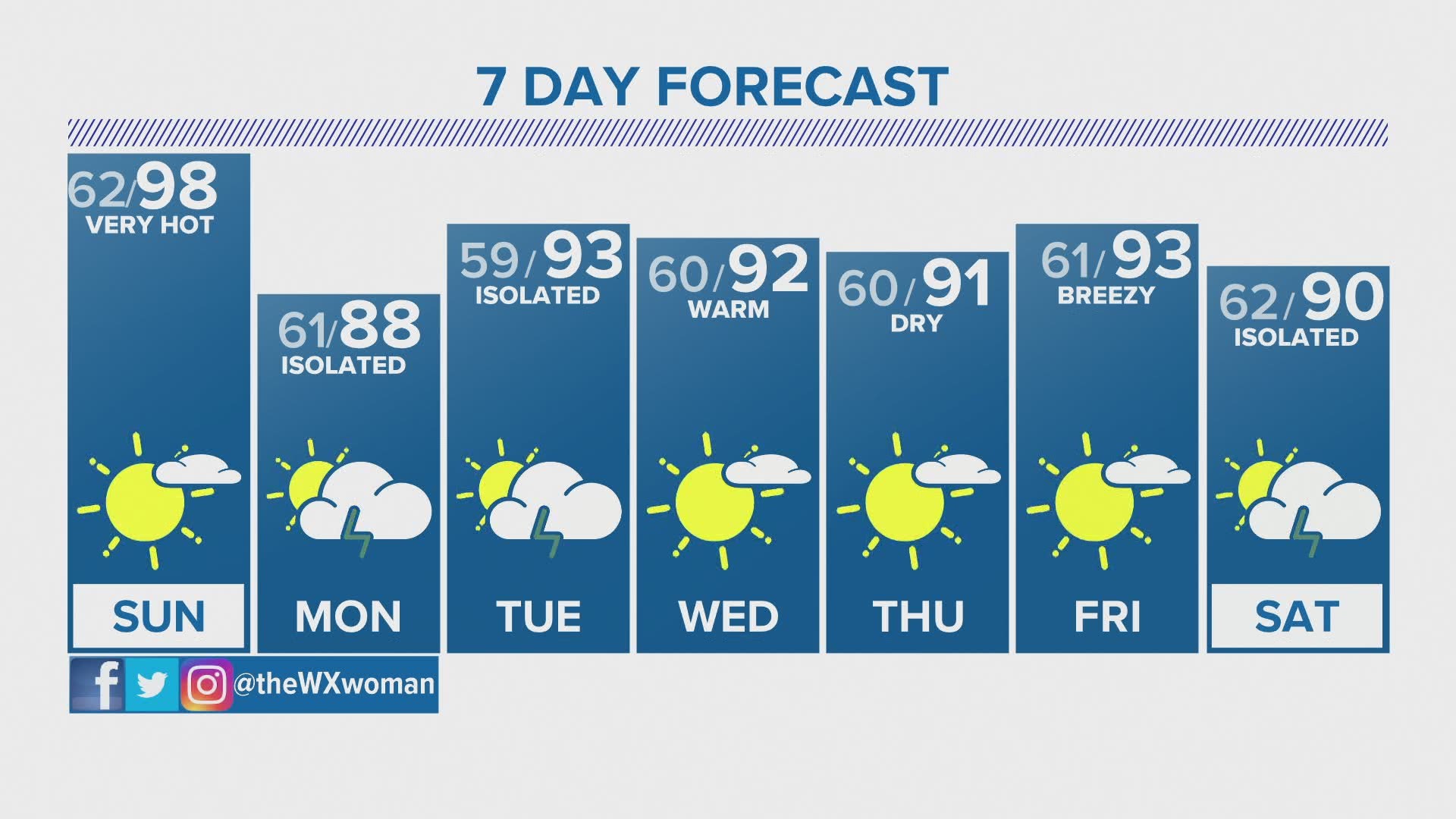 SUNDAY AT A GLANCE: It is recommended to stay indoors Sunday as high heat and poor air quality grip the region.

Sunday's current record is 98 degrees in Denver, last set in 2012. Daytime highs will skyrocket into the upper 90s and 100s Sunday afternoon across the Front Range and Eastern Plains.

The record high in Fort Collins is only 96 degrees and the forecast is 98 there. A 99 Sunday in Greeley would tie the record high there.

It'll be a dry day in Colorado with very isolated storms limited to the San Juans Sunday afternoon. Also some thunderstorms along the eastern state line where there is a level 1 Marginal Risk for severe weather on the Kansas and Nebraska side.

There is an Air Quality Alert out until 4pm for the entire Front Range for ground ozone pollution. That air quality is being compounded by wildfire smoke streaming across the Rockies from the Western Slope.

There is a separate Air Quality Alert for western Colorado for those areas closer to the smoke plumes coming from the Pine Gulch fire.

After a sizzling day, changes are on the way! A cold front will move in late Sunday into Monday morning, ushering in some slightly cooler air. High temperatures will be seasonal, in the upper 80s Monday afternoon. A few gusty thunderstorms are also possible in the afternoon. Fingers crossed for rain -- but it doesn't look like we'll get much.

The cooler weather won't last long either. Highs quickly bounce back into the 90s on Tuesday and beyond.

>> See all watches and warnings

MONDAY: Mostly sunny with a small chance for an isolated, gusty thunderstorm in the afternoon and evening. Morning lows will be from 58 to 63, afternoon highs from 86 to 91.

TUESDAY: Mostly sunny and gusty with a chance for an isolated thunderstorm in the afternoon. Morning lows will be form 57 to 62, afternoon highs from 90 to 95. While severe weather will be likely on the plains east of the urban corridor.

SATURDAY: Mostly sunny, and warm with a chance of an isolated thunderstorm in the afternoon. Morning lows will be from 60 to 65, afternoon highs from 88 to 93.

SUNDAY: Mostly sunny, very hot with a chance for storms. Morning lows will be from 60 to 65, afternoon highs from 85 to 90.

RELATED: Miss getting daily 9NEWS forecasts to your phone? Here's how to get them back

EMAIL FORECAST: Sign up to have the weather forecast delivered to your inbox twice a day!

TRAFFIC CENTER: Keep up on crashes and travel times here

If you have a weather report, photo or video to share, you can contact the 9NEWS Weather Team in these ways:

The 9NEWS Weather team of Kathy Sabine, Becky Ditchfield, Danielle Grant and Kylie Bearse update the Denver weather forecast multiple times each day. Bookmark this link to always have the latest forecast from 9NEWS. The team values your local weather reports and often features your photos and videos during weather segments in all newscasts.