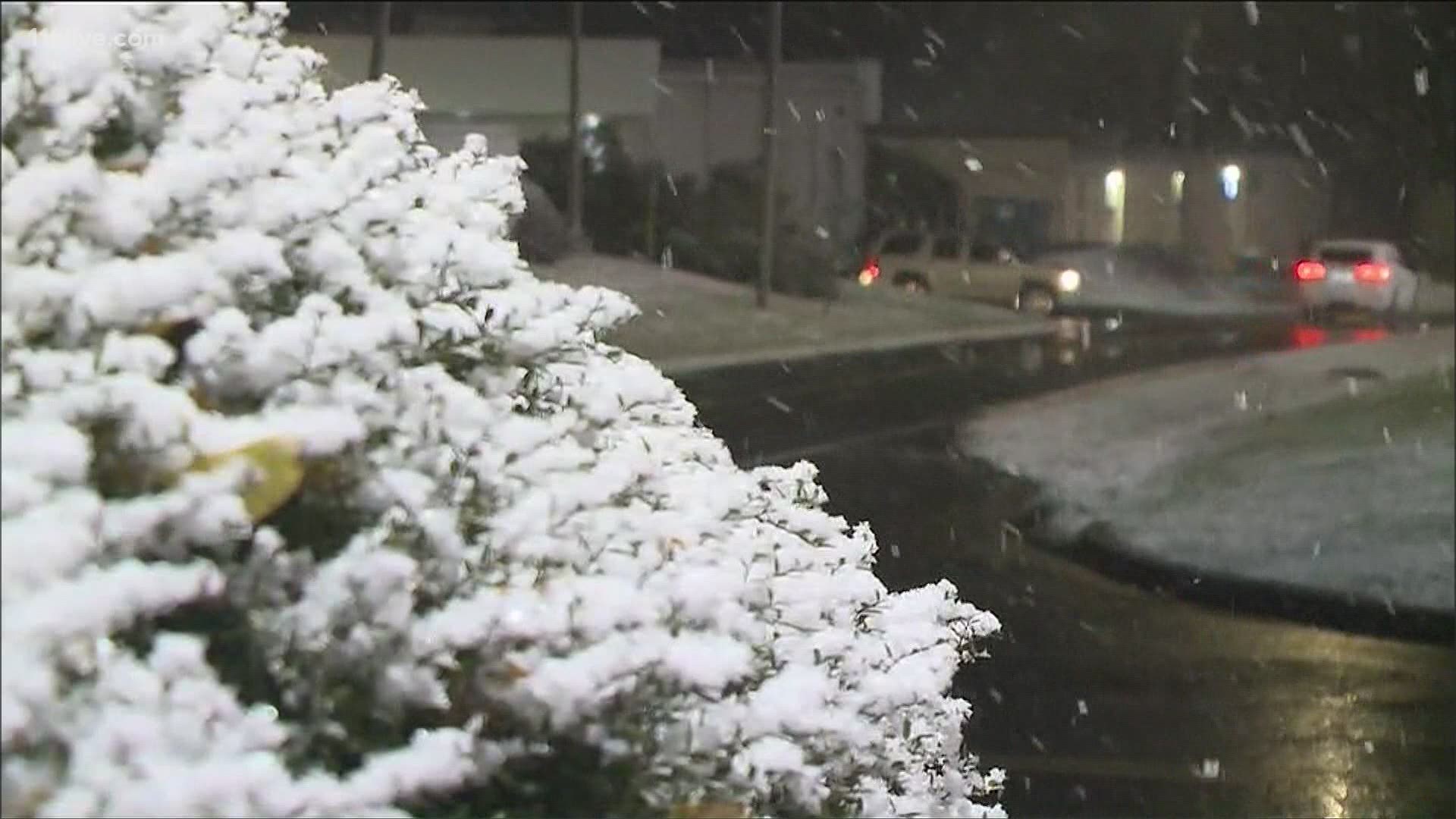 According to the 11Alive StormTrackers, temperatures on Monday will plummet in the overnight hours into early Tuesday - and bottom out in the 20s.

As temperatures continue to fall, moisture behind the system will bring snow flurries over north Georgia late Monday into early Tuesday. A winter weather advisory is also in effect.

Little to no accumulation is expected in the metro, but about 2" is expected to fall over the extreme higher elevations of the north Georgia mountains. After the precipitation moves out, temperatures will stay cold: highs on Tuesday will barely get above 40 degrees. Temperatures will start to moderate and warm after the middle of the week.

Scroll down and refresh this page often for the latest.

10:02 p.m. | The Cherokee County Sheriff's Office shared a lighthearted photo of "WALESKA 2020" written in the snow on a patrol car's windshield. However, they also had a warning, too, that drivers should use caution - especially on roadways north of Canton where it's already getting slick.

Credit: Cherokee County Sheriff's Office
Snow on a patrol vehicle windshield with the phrase "WALESKA 2020" written into it.

7:05 p.m. | Consistent snowflakes are falling around Ellijay, Georgia, according to reporter Hope Ford.

6:45 p.m. | Reports are coming in of snow falling in parts of Metro Atlanta, including Buckhead, Smyrna and Sandy Springs.

Snowing in @SandySpringsGA Is winter still coming or is it here? Watch those roads, bridges and overpasses. @GDOTATL has been out already up north and they’re ready if and when we need them here. @11AliveNews @11AliveTraffic #11Alive pic.twitter.com/C7cNV7DZBG

5:30 p.m. | The winter weather advisory was extended to include more counties, including some in the north metro area.

4:40 p.m. | Flurries are beginning to fall in Blue Ridge, Georgia. Watch the live stream of the snow below.

2:25 p.m. | A Winter Weather Advisory has been issued for parts of north Georgia.

The 11Alive StormTrackers say up to 2" of snow is possible in the higher elevations, and a half-inch to an inch possible in the valleys. It's possible to see a flew flying flurries in the north metro Atlanta area, but no accumulation is expected here.

Winter Weather Advisory issued for parts of north Georgia. Up to 2" of snow possible in the higher elevations. A half inch to an inch possible in the valleys. It's possible to see a flew flying flurries in the north metro Atlanta area, but no accumulation expected here. #Storm11 pic.twitter.com/s8WrX4MFbU

12:10 p.m. | The City of Atlanta is opening its warming center ahead of the anticipated cold Monday night.