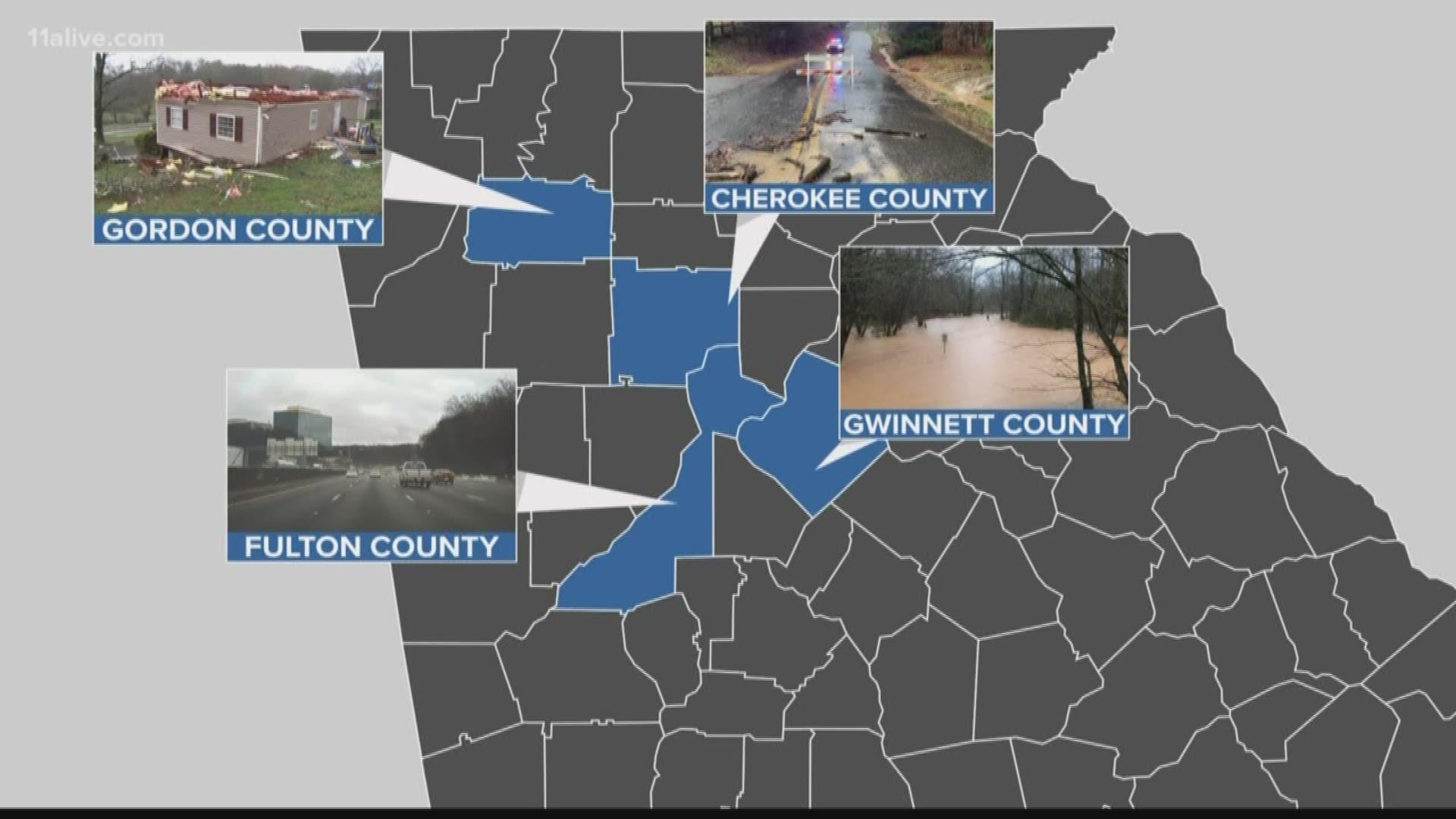 ATLANTA — Strong storms, producing severe thunderstorms and tornado warnings, are moving through Atlanta, so we're keeping a close eye on the skies.

And while very low, there is a threat of tornadoes - particularly in areas that come under a level 2 threat. A tornado watch was in effect for most of the Atlanta metro area until 1 p.m.

We'll be tracking weather and major traffic conditions into the morning to help keep you ahead of the storm - whether your're home, at work or in your car.

9:00 P.M. Some of the roads in Roswell that were covered in water are reopening.

6:49 P.M.: A second driver has died in the Carolinas, after their vehicle hydroplaned.

5:41 P.M.: 11Alive crews stumbled on a rescue attempt underway on the West Fork Little River in Hall County. A kayaker apparently got caught in the current and was forced to climb into trees for safety.

3:42 P.M.: 11Alive affiliate station WCNC in Charlotte reports that one person was killed in York County, South Carolina when a tree fell on their truck.

2:57 P.M.: 11Alive affiliate station WBIR in Tennessee reports one person was killed and four others were injured when a tree fell on a van.

RELATED: After the rain, cold air moves in ... and snow?

A Severe Thunderstorm Warning has been issued for Butts, Jasper, Lamar, Monroe, Pike and Spalding until 1:15 p.m.

A Flood Warning for Sweetwater Creek near Lilburn and the Chattahoochee River near Cobb Parkway is in effect until further notice.

A Severe Thunderstorm Warning has been issued for Greene, Morgan, Putnam, Chattahoochee, Marion, Stewart and Webster until 1 p.m.

12:30 p.m.: A Severe Thunderstorm Warning has been issued for Chattahoochee, Marion, Pike, Talbot, Taylor and Upson counties until  1 p.m.

A flood warning was issued for Suwanee Creek near Suwanee until Friday at 11 a.m., Noonday Creek near Woodstock until 8:55 p.m. tonight and Pew Creek near Lawrenceville until further notice.

11:20 a.m.: 11Alive meteorologist Wes Peery takes a look at what we can expect going forward as the afternoon approaches:

10:55 a.m.: There are flood warnings for Sope Creek near Marietta and the Alcovy River near Lawrenceville.

10:30 a.m.: The tornado watch has been canceled for Carroll, Cobb, Douglas and Forsyth Counties.

10:12 a.m.: A tornado watch has been issued for parts of northeast and middle Georgia until 5 p.m.

10:07 a.m.: 11Alive's Nick Sturdivant is at the scene of significant storm damage in Gordon County:

10:01 a.m.: Another tornado warning has been issued for Barrow, Walton and Jackson counties, including Winder, Loganville and Jefferson Counties until 10:30 a.m.

9:47 a.m.: A tornado warning has been issued for Clarke, Madison, Oglethorpe and Oconee Counties, including Watkinsville, Comer and Winterville until 10:15 a.m..

9:35 a.m.: The FAA has instituted a ground stop at Hartsfield-Jackson Atlanta International Airport until 9:45 a.m.

9:30 a.m.: The National Weather Service reports the flash flood threat for metro Atlanta will continue to increase over the next few hours, with very heavy rain and thunderstorm on the way.

9:25 a.m.: Community StormTracker Cassandra Morrow sends in this photo of a trampoline blown up and into her trees - it's not hers, and she's not sure where it came from.

9:20 a.m.: Delays as long as an hour and a half are being reported at Hartsfield-Jackson Atlanta International Airport.

9:05 a.m.: Reports of a possible tornado touchdown earlier this morning in Plainville:

8:59 a.m.: A tree fell onto a car on I-285 east of Ashford-Dunwoody Road. Fortunately, no serious injuries reported.

8:43 a.m.: The Gordon County Sheriff's Office confirms there are several structures damaged on East Plainview Road SE in Adairsville, with several trees and wires down.

8:05 a.m.: Storm damage has been reported to a home in Gordon County.

7:40 a.m.: A flood warning was issued for most of northwest Georgia until 1:30 p.m. this afternoon. Counties include Catoosa, Murray, central Floyd, Whitfield, Walker, Gordon, Dade and Chattooga.

7:30 a.m.: 11Alive meteorologist Wes Peery reports rainfall coming in at 1-3 inches per hour around Atlanta could cause flash flooding.

7:09 a.m.: Flight delays at Hartsfield-Jackson Atlanta International Airport are averaging more than half an hour.

7:04 a.m.: A tornado watch has been expanded to include most of metro Atlanta until 1 p.m.

6:47 a.m.: A severe thunderstorm warning has been issued for Bartow, Cherokee, Cobb and Paulding Counties until 7:15 a.m. It includes Kennesaw, Woodstock and Acworth.

6:41 a.m.: A significant weather advisory has now been issued for much of metro Atlanta, including North Fulton, Douglas, Cobb, Carroll, Western DeKalb and South Fulton Counties until 8 a.m.

6:37 a.m.: A flood warning has been issued for Big Creek near Alpharetta affecting parts of Forsyth and Fulton Counties until late Saturday night.

6:06 a.m.: The Severe Thunderstorm Warning for Gilmer and Pickens counties has expired.

5:56 a.m.: The National Weather Service has issued a Flash Flood Warning for Habersham and Rabun counties until 11:30 a.m.

5:45 a.m.: A Tornado Warning has been issued for Clay, Cleburne and Randolph counties in Alabama until 5:30 CT.

5:26 a.m.: A Severe Thunderstorm Warning has been issued for Gilmer, Gordon, Murray and Pickens counties until 6:15 a.m.

5:18 a.m.: The Severe Thunderstorm Warning for Chattooga County has been canceled but continues for Floyd, Gordon, and Murray until 5:30 a.m. Storms are capable of winds up to 60 mph and hail of up to three-quarters of an inch. Tornadoes are also possible.

5:04 a.m.: The Severe Thunderstorm Warning for Walker and Whitfield counties has been canceled but continues for Chattooga, Floyd, Gordon, Murray until 5:30 a.m. The storms could have winds up to 60 mph and hail up to three-quarters of an inch.

4:49 a.m.: A Severe Thunderstorm Warning has been issued for Chattooga, Floyd, Gordon, Murray, Walker and Whitfield counties until 5:30 a.m.

4:44 a.m.: Accidents are already beginning to pile up on wet roads in Atlanta. Southbound I-285 at Langford Parkway is completely blocked due to an accident and may not reopen until 6:45 a.m. We're keeping track of this and other accidents here.

A tornado watch means that tornadoes are possible in and near the watch area.

3:55 a.m.: Multiple northwest Georgia school systems including public schools in Catoosa, Dade, Murray, and Walker counties are on a two-hour delay due to severe weather in the region.

Steps you can take now to be prepared: 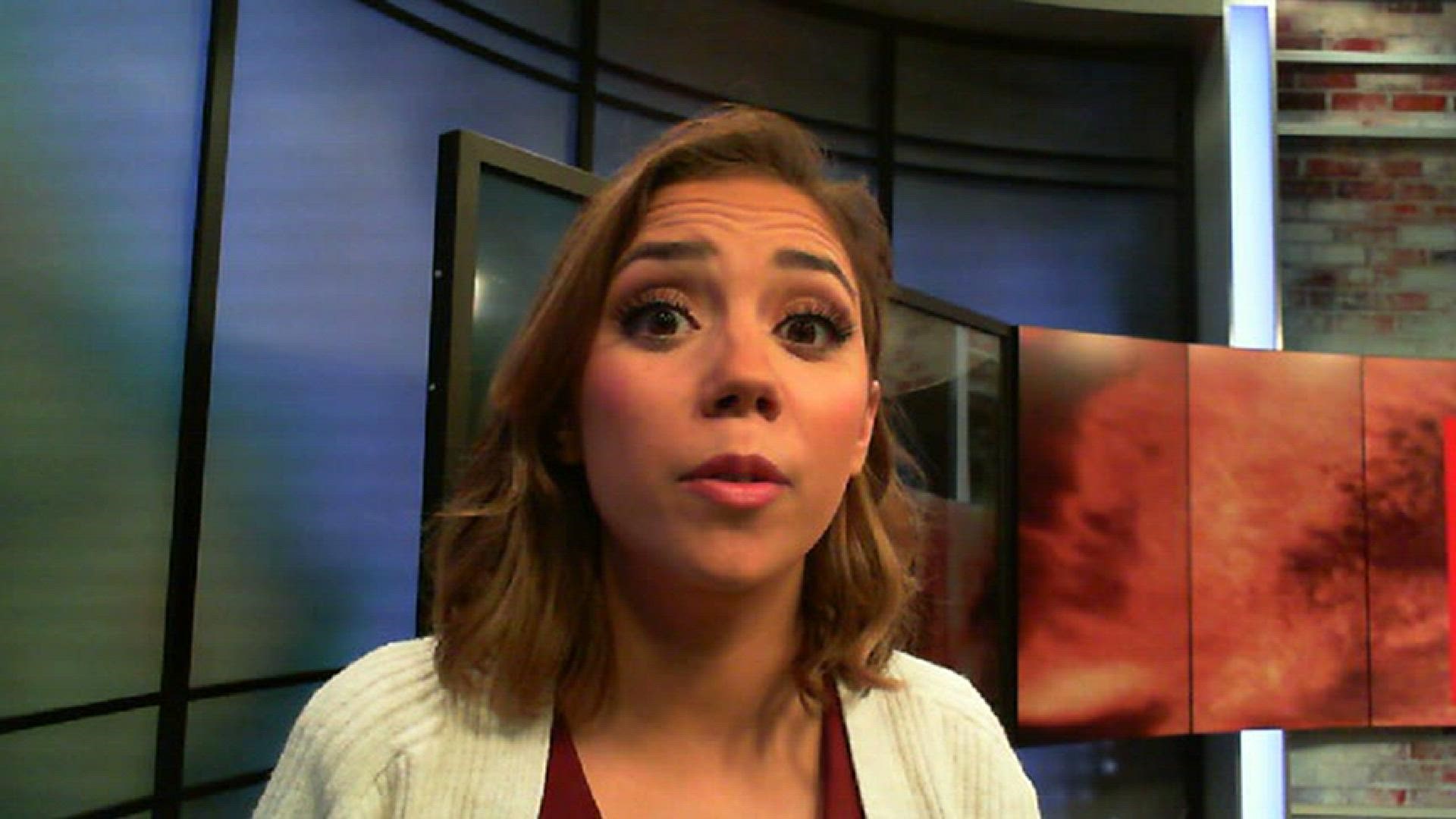 A series of storms, temp roller coaster ahead this week