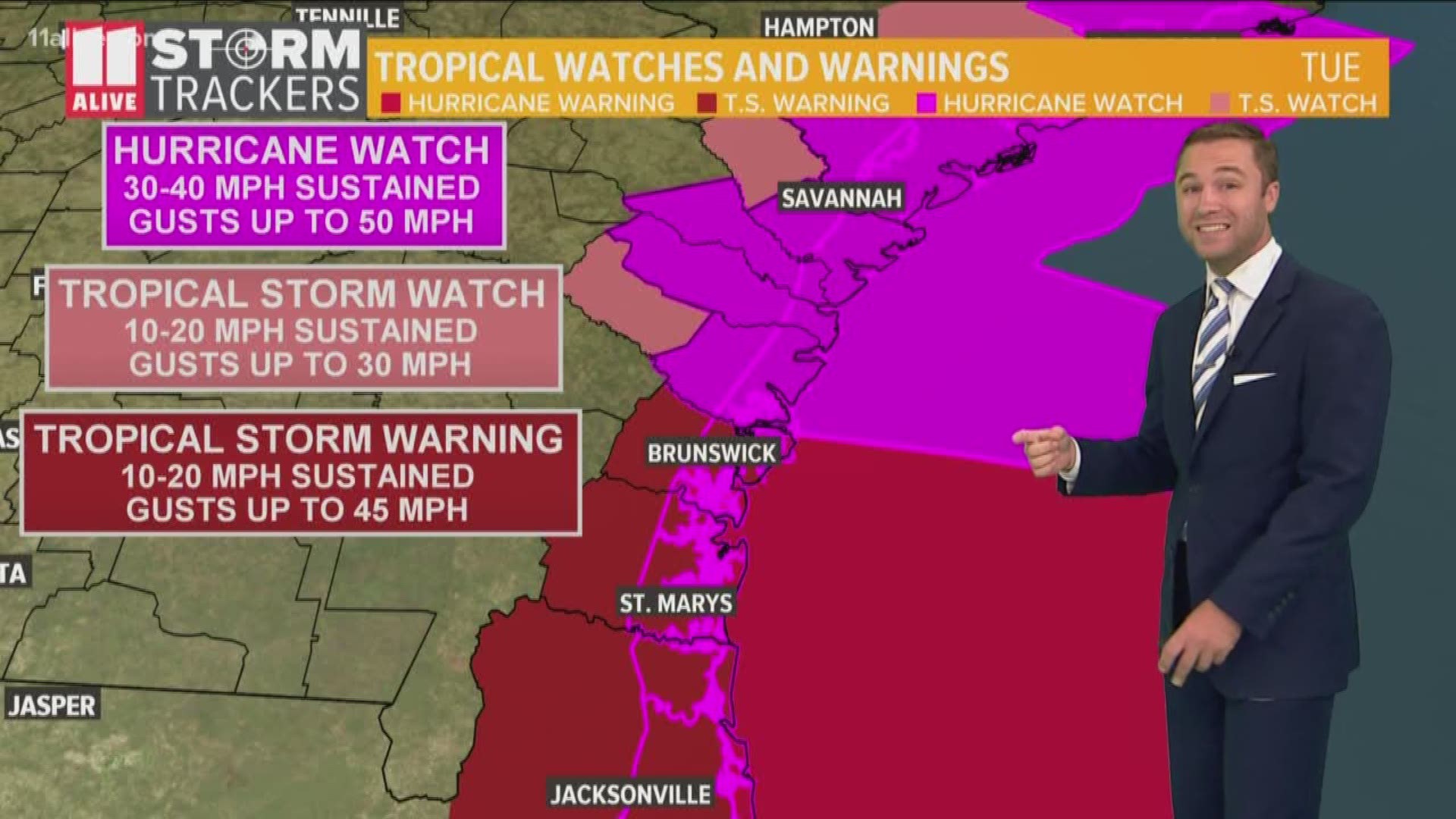 ATLANTA — A tropical storm warning has been issued for coastal Georgia hours before a mandatory evacuation begins.

All eyes are on the Atlantic as Dorian continues to batter the Bahamas before taking aim at the East Coast of the US.

The forecast continues to be uncertain with a couple of scenarios possible. It comes down to when the storm turns north. The current track keeps the center of the storm just off the US coast.  But it will travel northward along the coast and bring wind and rain with it.

No matter where the storm ends up, the big problem, as it is with most hurricanes is flooding.

Where the storm is headed

There is still a possibility that the storm moves further inland but there is a better chance it stays out at sea.

1-3" of rainfall is possible along coastal Georgia over the next few days.

The other, much bigger problem is storm surge. Storm surge is caused by strong hurricane winds pushed water ashore.

A storm surge warning is in effect for all of coastal Georgia, 4-7 feet of storm surge flooding above ground is possible in the warning area.

Some waves offshore may reach up to 28 feet.

Coastal Georgia is already very low lying and susceptible to flooding even without a hurricane. Depending on the storm track, damage along the coast could be considerable or devastating.

The last hurricane to impact Georgia was Michael in 2018. It remained a category 3 hurricane as it entered Georgia and weakened on its northeast path through the state.

Satellite imagery reveals the damage the storm did, scarring the earth. Whether or not the same areas are damaged again from Dorian depends on what happens after Monday.

The quicker the northerly turn, the better the chance that areas hardest hit by Michael are spared.

Dorian will have some impacts on metro Atlanta, mainly in the form of wind.

Wind speeds will begin getting stronger on Thursday and Friday

Temperatures may also be very warm if the storm follows the current forecast, possible in the middle to upper 90s in at Atlanta Wednesday and Thursday.

Georgia's U.S. senators Johnny Isakson and David Perdue on Friday urged Georgia residents to and remain aware of all warnings and advisories and follow safety precautions ahead of the arrival of Hurricane Dorian.

He followed up that emergency declaration by issuing a mandatory evacuation for the six coastal counties.

“I urge Georgians to take precautions early and follow the advice of state and local officials as Hurricane Dorian’s path becomes clearer in the days and hours ahead,” Isakson said. “Senator Perdue and I pledge to work with federal, state and local officials to ensure that Georgia has the resources needed should Hurricane Dorian impact our state.”

RELATED: Hurricane Dorian: What does a state of emergency mean?