The Cartersville Brewery has been doing this for 20 years. 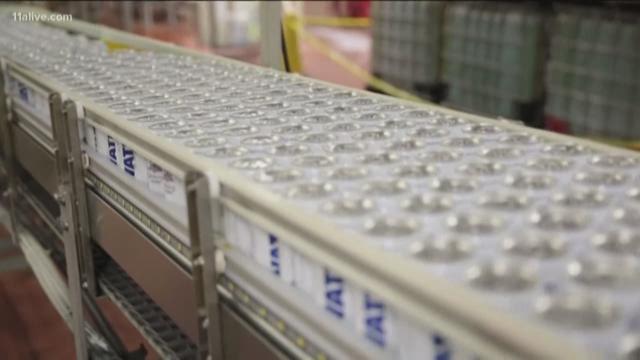 CARTERSVILLE, Ga. – Those affected by Florence will soon be delivered ice cold Anheuser-Busch. Well, ice cold canned water that is.

From the request of the American Red Cross, the Anheuser-Busch Cartersville Brewery is sending 300,000 cans of emergency drinking water to the hurricane-affected communities in the coming days.

For the last 20 years, the Cartersville Brewery has been a key national facility due to its capacity to produce cans of emergency drinking water quickly and has stepped up after a number of major national disasters. Anheuser-Busch periodically has paused beer production in Cartersville to produce clean, safe emergency canned drinking water to be ready when disasters like this hit.

“This year, as part of Budweiser’s Super Bowl commercial launch, we committed to expanding our emergency drinking water program,” Bill Bradley, Vice President of Community Affairs for Anheuser-Busch said. “Today, we’re pleased to be officially delivering on that promise, doubling our production capacity to help our fellow Americans in times of need.”

Following the 2018 Super Bowl commercial, the company is now doubling their emergency drinking water production as their Fort Collins Brewery in Colorado now has the same capabilities as Cartersville.

Anheuser-Busch said this follows a months-long process of converting the Fort Collins Brewery so it could switch from beer to water production. This will enable Anheuser-Busch to deliver water more quickly from coast to coast when disaster strike, they said.