Carteret County Humane Society, located in the city of Newport, notified Facebook followers on Friday that at least two people along with 43 dogs and about 80 cats were trapped on the top floor of the building. That's when the Cajun Navy came to the rescue. 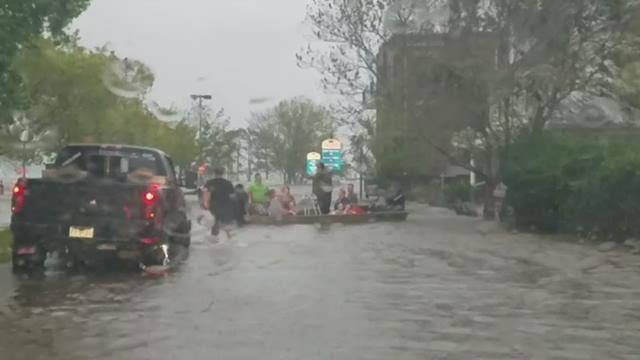 NEWPORT, N.C. — Rescue workers helped two people escape from a flooded animal shelter in North Carolina, leaving behind roughly 120 animals. Volunteers were able to step in and rescue all the animals around 9 p.m.

The Carteret County Humane Society (CCHS), located in the city of Newport, notified Facebook followers on Friday that at least two people along with 43 dogs and about 80 cats were trapped on the top floor of the building.

Roughly 15 chickens and roosters were stuck in an area at the back of the facility, but flooding from tropical storm Florence kept staff from reaching them.

The Cajun Navy, a volunteer group of private boat owners who assist in search and rescue efforts, helped escort the shelter workers to safety later in the day Thursday. But the animals remained trapped.

It wasn't until around 9 p.m. that the Cajun Navy announced they had successfully rescued all the animals and transported them to a local rescue. The rescue is working to figure out where to house the animals next.

The situation was looking desperate for a while.

"The shelter is old and needed repairs before the storm," manager Cassandra Tupaj wrote in a message.

Earlier today, the local fire department cut down trees so that some of the roads leading to the shelter could be drivable, however much of the area is still flooded.

"Roads are flooded around. Will Probably need boats," Tupaj said.

"Also the roof over dog kennels is saturated and not looking like it will hold up the whole storm," Tupaj said.

Part of the ceiling has already given way and the animals were standing in inches of water inside CCHS before the rescue personnel arrived.

Tupaj said various rescue groups are looking for large vehicles to help transport the animals out to higher ground.

Tupaj said the closest safe site is 3 hours away in the city of Standford and roads aren't likely passable.

The National Weather Service issued a flash flood emergency for the area lasting until 9:00 am Saturday, Sep 15.

"The unprecedented rainfall approaching 2 feet in Carteret County is being exasperated by an intense rain band that extends into nearby counties," the NWS posted on Facebook.

On Wednesday the shelter posted a Facebook status that reads: "Hey everyone! As we prepare for Florence we ask if anyone is out and about we could use the following items! Purina dog and cat chow, cat litter, and any type of water jugs. Thank you to anyone who can donate, our animals greatly appreciate it!!!!"