Remnants of Sally move through Georgia 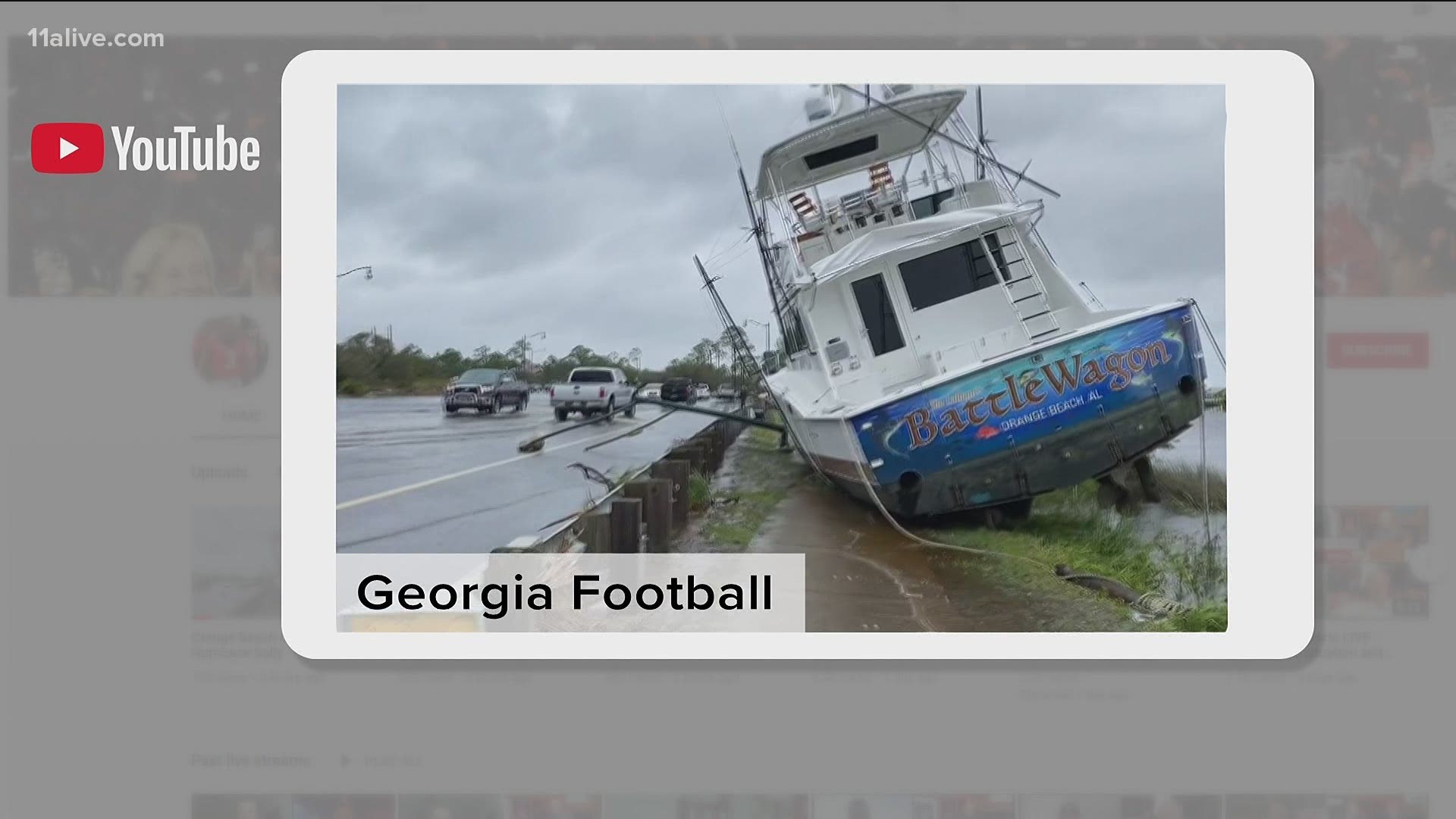 Hurricane Sally lumbered ashore near the Florida-Alabama line with 105 mph winds and rain measured in feet, not inches.

Now classified as a post-tropical depression, Sally is still spreading rain across metro Atlanta as she moves out.

Here is the latest on the storm, which is expected to bring heavy to moderate rains, winds and flooding into the metro Atlanta area throughout the morning.

4:30 p.m. - The Gwinnett Fire and Emergency Services confirmed this afternoon that a woman was killed this morning when a large tree fell across the road as she was walking her dog. The incident occurred on Capot Court outside of Snellville. The woman was pinned by the tree and pronounced dead at the scene. The dog was hurt and was turned over to an Animal Welfare officer at the scene. 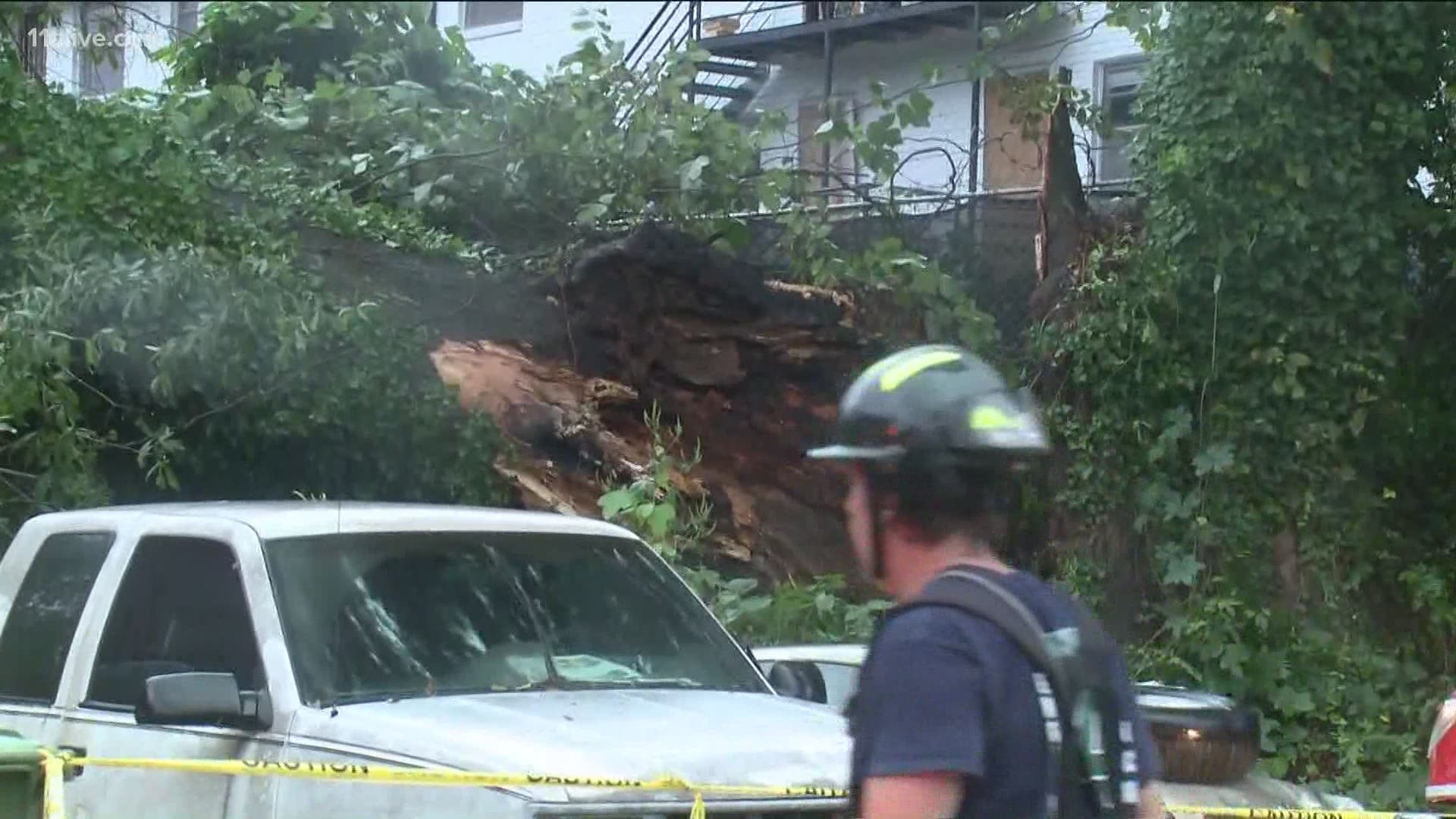 12:15 p.m. - Georgia Power says their personnel will continue to work around the clock, responding to 675 cases of damage, resulting in about 28,000 customers without damage across the state.

The utility reminds customers that dangerous conditions exist following a storm. Never touch any downed or low-hanging wire, including telephone or TV wires that touch a power line.

Never pull tree limbs off of power lines yourself or enter areas with debris, downed trees or standing water, as downed power lines may be buried in wreckage or submerged in water or mud.

11:45 a.m. - Georgia EMC is reporting 4,342 customers without power throughout all of their regions as of this point, with the majority of outages being reported in the metro Atlanta region.

11:45 a.m. - Georgia Power says customers are experiencing widespread outages across the state due to Sally.

Statewide, there are 25,523 customers without power at this point. As the storm moves out and travel conditions are safe, assessment and repair crews will mobilize and begin the restoration process.

11 a.m. -- Sally was downgraded to a post-tropical depression with top sustained wind speeds of 30 mph. The center of circulation was located about 115 miles southwest of Athens, Ga., or about 70 miles south of Atlanta Hartsfield-Jackson International Airport. The storm was moving northeast at 21 mph.

8:56 a.m. -- Power lines and trees fell on two vehicles at the intersection of Mt. Vernon Rd. and Chamblee Dunwoody Rd. No injuries reported but the road is closed.

TREE DOWN ALERT at the intersection of Mt Vernon Rd and Chamblee Dunwoody Rd. Massive tree fell on two vehicles with wires down thankfully no injuries. All directions of travel affected. Expect major delays. #ATLtraffic pic.twitter.com/U7goInWWae

8:30 a.m. -- As the sun comes out, there are more reports of trees down and flooding across metro area. This is how one yard look on Hutchens Rd. after a nearby creek backed up.

8:07 a.m. -- Tree falls on Sandy Springs Police truck working a crash on GA400 at Northridge. No injuries are reported.

While working a vehicle crash on GA400 at Northridge Rd, a tree fell on our @SandySprings_PD TRV truck. Everyone was unharmed. Please slow down while driving in the rain. pic.twitter.com/wpNqMLdoGn

7:30 a.m. -- More than 27,000 Georgia Power customers are experiencing outages across the state. Here are food safety tips to consider when your power goes out

7:00 a.m.  -- Massive delays on major roadways throughout the area. Check traffic maps before leaving or wait until daybreak before hitting the road.

TRAFFIC RED ALERT: A nightmare on I-985 SB near Spout Springs Road at times all lanes are blocked, massive delays. Use Hwy 13 / Atlanta Highway as alternate. #MorningRushATL #11alive pic.twitter.com/j4YZVCIb71

Another flash flood warning is in effect through 9 a.m. this morning for Baldwin, Jones and Wilkinson counties in middle Georgia.

5:55 a.m. -- Rain and ponding on the roads have lead to multiple crashes on nearly all metro Atlanta's major interstates. 11Alive Traffic Tracker Crash Clark is tracking the activity on Morning Rush.

Accident with an overturned car I-20 WB at Candler Road, holding all lanes. #MorningRushATL #11alive pic.twitter.com/2ogSROojxx

Accident with an overturned car I-20 WB at Candler Road, holding all lanes. #MorningRushATL #11alive pic.twitter.com/2ogSROojxx

5:40 a.m. -- Krog Street tunnel in east Atlanta is closed because of flooding.

5:30 a.m. -- There are more than a dozen wrecks on metro Atlanta interstates, wet from Sally. 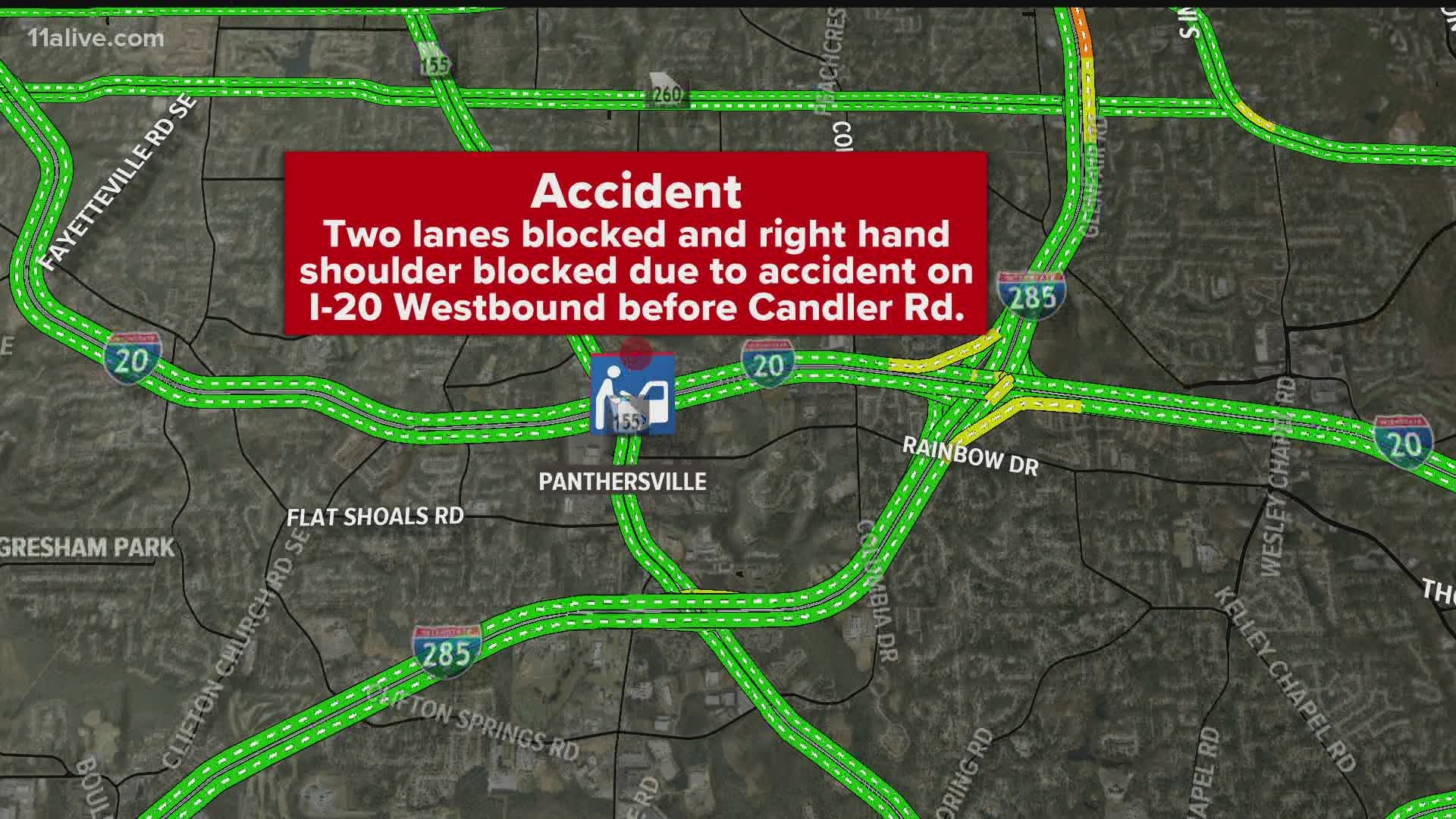 Avoid any areas where you see downed power lines because they can be dangerous.

#NEW— Just before 3 a.m., this tree fell onto a home along Howell Street NE in the Old Fourth Ward area. Thankfully no injuries were reported.

9:47 p.m. -- Heard County Schools will also be closed, according to the district.

"School will be closed due to an overabundance of caution after watching the 11:30 a.m. National Weather Service briefing. We have large concerns for the amount of rain forecast for our area. Dirt roads and gravel roads will likely be washed out and make travel impossible in some areas," the district said.

9:45 p.m. -- The mayor of Orange Beach, Alabama is reporting the first storm-related death from Hurricane Sally. One more person is missing.

9:38 p.m. -- The Troup County School System says that schools and offices will be closed on Thursday, Sept. 17 because of anticipated severe weather associated with the remnants of now-Tropical Storm Sally.

"TCSS is not requiring a virtual learning day tomorrow because we cannot guarantee our families will have power for use of computer technology," the school system said.

Thomaston-Upson Schools will also be closed Thursday because of potential severe weather.

"Morning travel, especially for our school buses, could be extremely unsafe. As you know, the safety of our students and staff is always our top concern, so please stay home and stay safe," the district said.

9:00 p.m. -- Sally’s remnants continue to move toward Georgia. Rain will get heavier, and the wind will kick up. 11Alive's Chief meteorologist Chris Holcomb is giving an update now.

5:30 p.m. -- The Chattahoochee-Oconee National Forests is closing several low-lying recreation sites in the predicted path of Tropical Storm Sally beginning Wednesday, Sept. 16. The sites will remain closed until the storm passes and sites are safe for visitors.

"Low-lying areas are especially vulnerable to rapidly rising and swift water," the USDA Forest Service said in a announcement. "These areas should be avoided during and after major storm events."

The @ChattOconeeNF is closing several low-lying recreation sites in the predicted path of Tropical Storm Sally (https://t.co/2XQmLWFT54) beginning 9/16. The sites will remain closed until the storm passes and sites are safe for visitors. On the web: https://t.co/z0gKuDPBh5 pic.twitter.com/ZX9qVv1Nqi

4:50 p.m. -- The DeKalb County Board of Health said it plans to close some of its COVID-19 testing sites Thursday because of the treat of possible inclement weather from Sally's remnants.

Anyone scheduled for an appointment on Thursday has been moved to Friday, the board said.

4:23 p.m. -- Georgia Power tells 11Alive that it has not made a request yet for help from other states, but they are on stand-by to do so. Right now, they don't have specific numbers yet of how many crews they will need to activate.

The company told 11Alive they all crews have returned home from helping with Hurricane Laura recovery in Louisiana.

RELATED: Here's what Georgia is doing to prepare for the remnants of Sally

Georgia Power said it is prepared to pull crews from cities that aren’t impacted and send them to cities that have a great need, for example, pulling from Savannah to send to West Georgia. It said it has also made Mississippi and Alabama Power aware (and vice versa), but don’t plan to ask them for assistance unless it’s an emergency, because those states are already getting hit.

As for customers, Georgia Power recommended they do the following to prepare:

4:00 p.m. - Atlanta Fire and Rescue confirm that a tree that fell into a home off Linda Way in southwest Atlanta has killed one person.

Another two people were inside the home when the tree fell, officials said. One of them was able to get out of the home on their own. The other man had to be rescued from the home.

Video from the scene showed the large tree - uprooted - spanning across multiple cars and the point where it came to rest on the home. There was significant damage to the home's front porch.

3:52 p.m. -- The Georgia Department of Transportation said it is preparing for the impacts of what's left of Hurricane Sally as it moves through much of the state beginning Wednesday night.

"GDOT teams statewide have equipment loaded and crews are on alert, including immediate-response strike teams ready to respond should the storm turn into a severe weather event anywhere in the state," the department said.

According to GDOT spokeswoman Natalie Dale, crews have also been cleaning the shoulders and drains of roadways all week, however, "with the strength of the storm and the amount of rain, it is still likely that we will see flooding in some areas," she said.

You can see more on what state agencies are doing to prepare for the storm.

3:16 p.m. -- A flash flood and wind advisory are both in effect for much of the state as the remnants of Hurricane Sally move into our area.

Here is a live look at the storm.

4:45 a.m. - Hurricane Sally makes landfall near the Florida-Alabama line as a Category 2 storm with winds of about 105 mph.